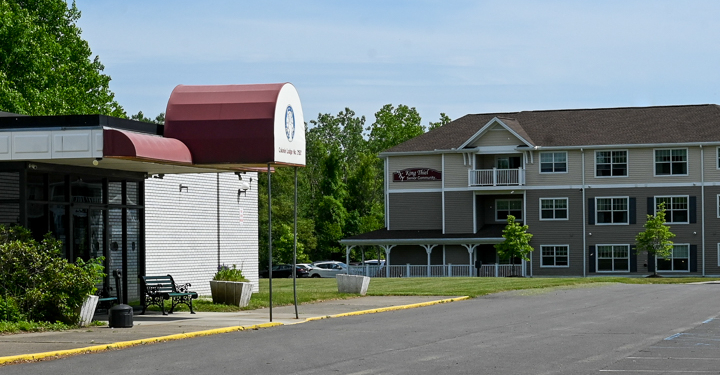 COLONIE — A plan to demolish the Elks Club off Watervliet Shaker Road, or Route 155, and build a three-story, 125,600-square-foot, 99-unit apartment building for seniors was introduced to the Planning Board at its last meeting.

The plan, proposed by Colonie Senior Service Centers, would offer “affordable” units, also includes 36 garages and 81 parking spaces. It would be adjacent to the existing King Thiel Senior Community building, a 96-unit senior apartment building at 17 Elks Lane which Colonie Senior opened in 2017. The two facilities will share programming and transportation.

CSSC has two other facilities: The Beltrone Living Center on Winners Circle off Wolf Road with 250 units and Sheehy Manor on Cardondelet Drive with 50 units. Beltrone is geared towards “middle income” seniors and houses the CSSC administrative office and the town’s Senior Resources Department. Rent prices at King Thiel are called “affordable” while at Sheehy Manor they are set for low income seniors.

There were some questions regarding the three-story building and the residences along Abedar Lane and other homes in the area. Dan Hershberg, the engineer who presented the project to the Planning Board on Tuesday, June 1, said three story design is needed to reach the desired 99 units and the building cannot be moved closer to Elks Lane and away from Abedar because of a steep slope.

“The size of the building is a function of the number of units and for practical purposes we can’t get much below the 99 we proposed here,” he told the Planning Board. “Our goal here is to see how we can reconfigure the site plan to make it work but we can’t move the building too much further away from Abedar because there is not enough level land to do it.”

The garages would be built along the existing treed buffer with Abedar Lane and they should also work to screen the building from the neighbors, said the Town Designated Engineer on the project, Joe Grasso, of Clough Harbor Associates. Hershberg said there will be a virtual, 3D rendition of the building to simulate what the building would look like from the homes on Abedar and the surrounding neighborhoods.

Planning Board member Craig Shamlian said the “viewshed from Abedar is going to be critical on whether or not this project makes sense.”

“And it seems like this has gone piece by piece and I’m a little concerned about that,” he said. If you have to relocate the garages, I’m not sure how you are going to accomplish everything at this site. Obviously there is a need for senior housing in town, but I don’t know.”

He is referring to a cellphone tower approved at the complex in April. The plan now is for the Elks Lodge to sell the building and most of the land to CSSC but retain a chuck at 396 Watervliet Shaker Road and lease it to Verizon for the new cell tower. A number of residents spoke against the tower, which will be disguised as a pine tree.

Michael Stapleton, who has lived on nearby Starlight Road said he was opposed to the cell tower and is opposed to having a three-story building constructed at the Elks site.

“It should not be put there. This is a residential area. Three stories is just too high for that area. I understand there is a need for senior housing but I am very much in favor of scaling back the size of the building,” he said. “I find it interesting that in all the discussion about the cell tower, nothing was brought up about the fact this was already in the works. I wish the town would spend more attention to the residents who have been there a while instead of the developers just coming in.”

Grasso said any clearing related to the recent project should not include vegetation that helps screen the tower from the neighborhood.

Planning Board member Steve Heider said “I don’t think the garages belong there unless you can keep them 100 feet from the residences. I would love to see those garages go somewhere else.”

The plan calls for banking 62 spots, which is setting aside a suitable area to construct them if they are needed. Hershberg said based on the parking needs at King Thiel they will not be necessary. With the banked parking the site would be 45 percent green, if the spots are developed it would be 40 percent.

There is a proposed walking trail that would swing behind the garages and connect with an existing trail at King Thiel.

The plan is to install porous pavement to handle drainage and to install solar panels, both on the parking garages and in the parking lot, which would not only generate electricity to help offset utility costs for the residents but also act as canopies during inclement weather.

There is a question on whether or not Elks Lane should remain public or become a private road. If the project is built, the only structures on the dead end street would belong to CSSC but Hershberg said it should remain a public road as it has been for decades.

If the project moves forward and the Elks to sell the land it is unclear where the lodge will relocate.

“While nothing has been signed as of the date I am writing this, the wheels are now rolling regarding the sale of the Lodge property,” wrote Mark Loucks, exalted ruler of the Elks Lodge 2192, adding the membership could merge with another lodge or move 2192 to a new location.

The project would need a change in zoning to Planned Development District, which allows for more density. In return, the developer would have to pay a public benefit, either a cash payment or in-kind by paying for improvements that would benefit the town as a whole such as sidewalks. Hershberg said a formal offer has not yet been discussed.

The project was introduced as a sketch plan, a stage in the process that does not allow public comment. Making the project return for another sketch plan review before allowing it to go to the concept acceptance phase was brought up, but Planning Board member Paul Rosano said it should go to concept so the public could be heard.

“It doesn’t mean we can’t have more than one concept (discussion) but I think that is the way to go,” he said.

Board Chairman Peter Stuto, though, left it “open” and it is not clear where the project stands at this time. It must get concept acceptance and final site plan approval before construction can begin.

All 396 apartments in the CSSC system are rented, said Executive Director Diane Conroy-LaCivita, and there are hundreds on the waiting list and it could take years for a person to get a place. At King Thiel, right now, it could take up to three years for a senior to get an apartment.

According to the U.S. Census Bureau, in 2019, the most recent data available, 18 percent of Colonie’s nearly 83,000 people are over the age of 65. Two of the three buildings operated by CSSC offer apartments to those over 55 and while that demographic is not exact, it could represent as much as 25 percent of the town’s population.

And people are living longer. CSSC had six residents turn 100 over the past year and according to the Population Reference Bureau, a government agency based in Washington, DC, between 1900 and 2000 life expectancy in the U.S. increased from 51 to 80 for females and 48 to 74 for males.

The need for senior housing, in particular housing that is affordable, has never been greater and Conroy-LaCivita said there is no reason to believe that, and the host of other services offered by CSSC, which is celebrating 40 years this year, will do anything but increase.

“I don’t see our numbers going down. In my experience here, what we seem to have is a tremendous need for affordable senior housing,” she said. “People want to remain independent and want to stay in the community where they have lived and where their family is, but they want to be able to afford where they live, too.”

The average age of the residents at Sheehy, which houses those 62-plus, is in the low 80s, at Beltrone it is 85 and at King Thiel it is in the late 70s, she said. Beltrone and King Thiel are for those 55 and older. All rents are formulaic and on a swing scale based on income.

Should the new facility get approved it will carry the same price range as that offered at King Thiel, which is no more than 20 percent of a person’s income. It is restricted to those 55 and older and residents cannot make more than about $60,000 to live there. Roughly, for a one-bedroom, one bathroom apartment would cost $1,000 a month and include everything but electricity. There is some wiggle room based on the Payment in Lieu of Taxes agreement with the school districts that allow someone to stay in the complexes should they, for example, have a very good day at the track or the casino.

To the new project, Conroy-LaCivita said everything is in the preliminary stages and she hopes to work with the town and the residents to construct a building that will satisfy the needs of a growing population and amenable to everyone involved.

“We have to be able to afford to build affordable housing,” she said of concerns about the building’s size. “The Elks need to get paid and the engineers and construction costs are going up. If our numbers are limited to a certain degree it might be something we could not pursue.”

CSSC also provides a host of other services like congregate meals, transportation to and from doctors’ offices across five counties, adult day care, a host of recreation and social activities and a home maintenance for seniors still living at home.

While a number of seniors prefer to age in their own homes, the pandemic, which was particularly lethal for the aged, forced many into isolation she said, and she saw an uptick in those wanting to move into a congregate setting.

The organizations name does have “Colonie” in the title but it is an independent entity and does offer services to seniors from outside of town.

“This organization has been around for 40 years and we are truly here to support seniors in our community,” she said. “Our mission is to allow seniors to stay in place, and age in dignity.”

Baroque violinist performs in Troy’s famed music hall, to which she has familial ties

POINT of VIEW: The sheriff rides into Albany