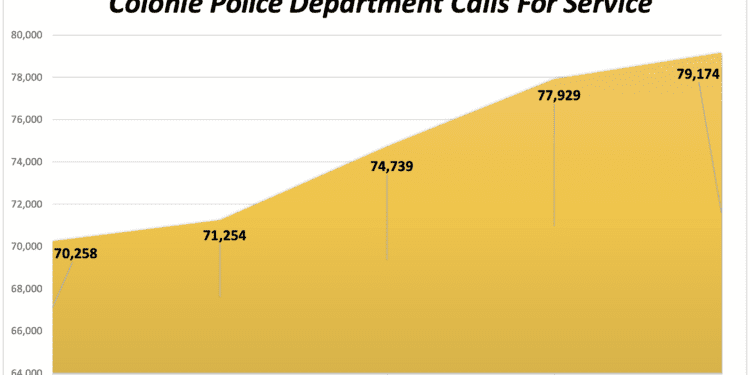 COLONIE — The Comprehensive Police Practices Review Committee held two required public hearings last week on a draft plan that does not propose changing much in how the Police Department operates.

One member of the public spoke on Tuesday, March 9, at a special meeting at the Crossings and another spoke prior to the Town Board meeting two days later.

The one person who spoke on Thursday, did not want her name used and asked about how the department conducted outreach to seniors and how it compiled arrest data.

Colonie, with a population of some 83,000, is larger than the cities of Troy and Schenectady and not much smaller than the City of Albany. But, the town Police Department has not come under fire like those in the cities. In fact, a recent poll conducted by the town and Siena College found the CPD had a 91 percent approval rating.

The review committee, though, was mandated by one of Gov. Andrew Cuomo’s many executive orders signed in 2020 in response to the death of a Black man, George Floyd, at the hands of Minneapolis police. The video of the police officer kneeling on Floyd’s death sparked protests and riots across the country including the Capital District.

Police Chief Jonathan Teale said part of the governor’s mandate was for each department to explore ways to achieve six goals including eliminate racial inequalities in policing, develop practices to better serve people of color and foster communication between the police and people of color.

Teale said for more than 25 years, the department has been an accredited agency, which requires it meets and maintains certain standards and is audited by state and federal agencies to make sure the department is in compliance.

He said the department does continually look at standard operating procedures and constantly looks at ways to make them better.

“When something happens in town or somewhere else in the country we look at it among ourselves and we look at ways it was handled and how we can handle it better,” he said. “We look at what could have provided a better outcome and training is huge.”

One practical result of the committee’s work the department will put into effect is annual diversity training for all officers. Right now, Teale said, the officers complete diversity training when they are hired but unlike annual training, or even refresher courses, for things like weapons and driving, it is not something currently done on an annual basis.

He also is recommending an increase to staffing levels that will commensurate with what is expected to be an increase in population from the last Census in 2010 to the one recently completed. Right now there are 112 officers and there is one budgeted vacancy. The department hired four last year with the expectation of taking the job this year after the COVID budget crunch had eased a little.

But, Teale said two of the new hires found other employment and he was able to fill one of those spots. He said given what is happening nationally — with cries to “defund the police” a catch phrase summarizing the sentiment of some civilians and elected politicians —  is making it more and more difficult to hire qualified people to become police officers.

Colonie is unique in that the 83,000 population explodes to more than 200,000 during the day as people either traverse the centrally located town or some into town to work. Of the permanent residents, some 90 percent are white, 4 percent are Black, 4 percent are Asian, 1 percent are two or more races and 1 percent are “other.”

Teale and Supervisor Paula Mahan said the department already engages in a number of community outreach programs, many of which were postponed in 2020 because of the pandemic.

“We still have programs other departments have done away with due to lack of funding but we made them a priority,” Mahan said. “One is the DARE program and they have changed what they have done over the years to keep up to date but it is still about building trust with the officers.”

She also mentioned Youth Court to keep juvenile defenders out of the adult criminal justice system while at the same time introduce them to how the system works, and the Explorer Post, which gives high school students a first-hand look at a career in public safety

Former town Judge Peter Crummey, who recently stepped down from the bench to run for supervisor, said he has processed “10s of thousands of cases prepared and presented by Colonie Police” in the 21 years he sat on the bench.

“I can say their presentations are exceedingly professional and the Colonie Police Department is an aspirational department to other departments across the state and across the country,” he said.

Of the 23 complaints, one contained allegations racism according to the report. A man claimed an officer pulled him over because he was Black, but an investigation revealed there was probable cause for the traffic stop.

The Town Board will approve a final report and the changes to the department protocol sometime by the April 1 deadline established by Cuomo’s executive order.