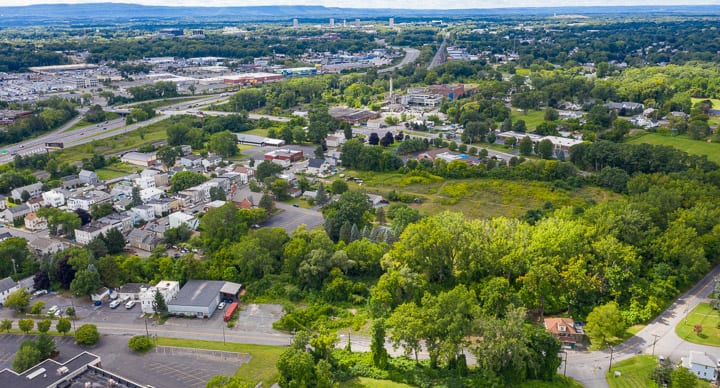 The West Albany neighborhood along Exchange Street with the location of a proposed senior housing facility on the right and Tobin’s First prize in the distance. Jim Franco / Spotlght News

COLONIE — A senior housing project working its way through the planning process, by law, will not make chronic flooding in a West Albany neighborhood any worse. And a study funded by developers may ultimately help matters and provide some relief for the deluged homeowners.

Last week, the Planning Board heard from a number of residents before handing off to the Town Board a request for a Planned Development District along Everett Road to accommodate the senior housing apartment building. Residents were not enamored with the idea, and are afraid of more traffic in an already congested area and, more importantly, afraid it would lead to more water problems.

“There should not be any development allowed in West Albany before the flooding problem is resolved. You should not vote for this,” said Sumpter Street resident Anthony Catalano. “I’ve lost my hot water tank, my furnace, my electricity nine or 10 times in the past 10 years. The problem is not getting better. Taking the last piece of green space in West Albany and replacing it with blacktop is not the solution.”

The project, proposed by Crisafulli Associates, requires a change in zoning from Neighborhood Commercial Office Residential to a Planned Development District which allows for more residential density. With any PDD comes a contribution by the developer to benefit the town as a whole. The amount is formulaic, and in this instance it is proposed at $357,000 with a yet to be determined portion of it going towards a study of the West Albany neighborhood’s flooding issues to explore ways to alleviate some of the problems.

“The region has historically been a challenge relative to flooding. The people in the area really struggle and the town has been working on periodic flooding there for years. As much as we try manage the water, topography and global warming work against us,” said Town of Colonie Department of Public Works Commissioner John Cunningham. “I continue to look at any development in the area as an opportunity to improve watershed management. We have already started looking at this project to see how it might fit into an improvement.”

Frank Marino, a 52-year resident of Sumpter Street, said the issue is two pronged: one the culvert running under I-90 is too small and often gets clogged up and when water is released from the retention pond on Russell Road into Sand Creek, “flooding occurs and we have a disaster.”

“Something has to be done with the culvert. That will stop some of the flooding,” he said. “All we are asking for is a simple resolution. This is what we can do, this is what we can’t do. I don’t want to be lied to. It takes money and at the end of the day, I cannot take one more drop of water than is already getting to me.”

The culvert backs up when there is a large amount of rain in a short period of time or when there is prolonged rainfall. It is a convoluted system that includes the Six-Mile Water Works Reservoir on Fuller Road and the Patroon Creek, both of which are located in the City of Albany. The bottom line is, the culvert backs up on the Colonie side of things and the neighborhood floods.

While the current project is in front of the Planning Board, fixing the long-standing water problem is likely beyond the board’s purview — outside of recommending the Town Board spend some public benefit money on the study mentioned above.

“Over the years, we have had residents talk about different things in their neighborhood and many times we as a Planning Board can do something to help,” said Planning Board member Craig Shamilan. “Not only were these residents impassioned their stories, they were heartbreaking, but we as a Planning Board have virtually no power to fix any of that. Everyone who spoke tonight needs to go to the Town Board because we can’t fix this.”

By law, any development cannot make matters worse for any existing neighborhood. Ideally, as developments progress through the planning process, stipulations can be incorporated into the site plan to help alleviate existing problems.

In the case of the Crisafulli project, the plan is to use porous pavement at the site which allows storm water to seep through into the earth below and eventually into the groundwater. An alternative to that concept is to channel the water into a retention pond or basin and allow it to dissipate naturally. The challenges with that technique is, obviously, containing the water and developing a system that can handle the worst storms that seem to come more frequently and with more strength. Dan Hershberg, the engineer who presented the project on behalf of Crisafulli, said using porous pavement would not change the amount of water leaving the site at all.

“We are not promoting a greater level of infiltration on neighboring properties. We will not impact flooding at all and we don’t impact the ground water,” he said. “The main issue for the flooding problems predates this project.”

The neighborhood is right on the City of Albany line and consists of only a handful of streets including Exchange Street, Sumpter Street, Corning Street and Cobee Lane. It is surrounded by an industrial park to the east, I-90 to the south with large industrial buildings beyond that, Everett Road to the west and what is largely greenspace to the north. It is on that 10-acre chunk of greenspace where Crisafulli wants to build the senior housing project.

Another large scale project in the vicinity is working its way through its own planning process, albeit slowly, and that is the demolition of the old Tobin’s First Prize building and the construction of a mixed use “neighborhood.” One neighbor said he is all in favor of doing something with one of the Capital District’s largest and longest standing eyesores, provided it does not lead to more flooding.

The West Albany neighborhood does appear to sit lower than its surroundings and when the surroundings are all blacktopped with traditional asphalt — not the more expensive porous variety — water follows the path of least resistance.

Sean Maguire, head of the town Planning and Economic Development Department, said his office, at the request of the Planning Board, is looking into what might be contributing to the flooding.

“That means looking at areas where development may have occurred without proper approvals and if the current infrastructure as designed is working as intended,” he said. “Any studies of the area would likely examine the sources of stormwater runoff in addition to ways to retain and release storm water to prevent the current infrastructure from being overwhelmed during a storm. Certainly, the geography presents a challenge because it does sit in a low spot compared to the surrounding area.”

Crisafulli did scale back the 55 and older housing project from four floors to three and from 153 units to 113 to answer concerns voiced by neighbors and members of the Planning Board. The proposed public benefit was also upped from $250,000 to $357,000. Some of that will be used for the flooding study with a portion to be used for street and park improvements and whatever is left over to be contributed to the town Local Development Corporation to promote businesses throughout the town. The exact breakdown has not yet been determined.

The main access point is a shared driveway with the Joseph E. Zaloga American Legion Post onto Everett Road. Initially, Crisafulli had proposed giving a portion of the public benefit to the Zaloga post with the rationale the charitable work done by the post benefits the town as a whole but the Planning Board did not agree since access onto Everett is a necessary aspect of the project.

There was some concern voiced by neighbors about having a driveway onto Duffy Lane leading to Exchange Street, which was encouraged by the Planning Board to allow people access to a light who want to take a left hand turn onto Everett Road. That point is also still open to negotiation as the project progresses through the process.

While the size and scope of the project are worrisome to some residents and some members of the Planning Board it is smaller than what is allowed under the current zoning parameters — a 140,000-square-foot commercial, office or medical arts building — and senior housing projects have the least amount of impact on traffic and other town services like sewer and water.

If the Town Board approves the zoning change, the project will have to come back to the Planning Board to complete the process before construction can begin.