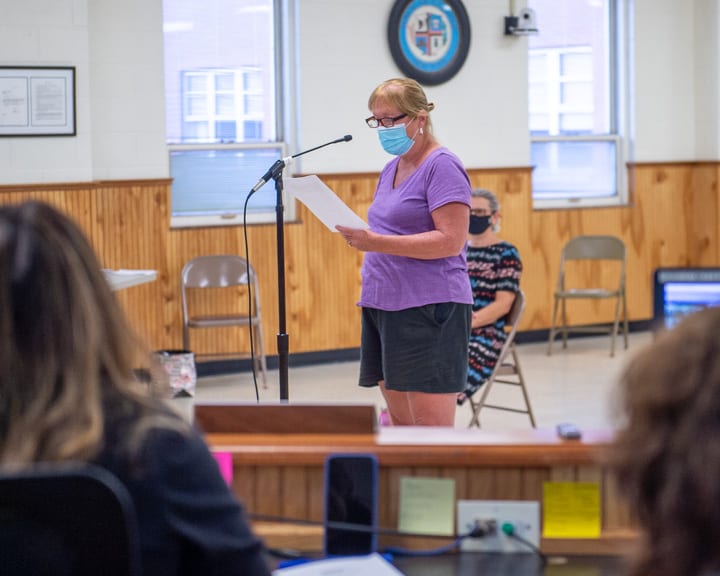 COLONIE — The Town Board did not formally vote on a resolution aimed at curbing aggressive panhandlers during its regular meeting on Thursday, Aug. 13, but members of the public who spoke on the issue were largely against the measure.

Concerns of the half dozen people who spoke against the Local Law include opening up the town to a lawsuit, discrimination against the poor, addressing just one symptom of broader issues related to poverty, drug addiction and mental illness and violating a person’s freedom of speech.

Other speakers claimed the town is only trying to keep suburbia attractive by eliminating the often unsightly appearance of  panhandlers and the underbelly of society it represents.

“The first sentence of Section 2 of the legislative intent states ‘the goal of keeping Public places attractive’ which denotes the primary purpose to restrict panhandling is that the public presence of low income community members is unattractive,” said Sonya Rio-Glick. “In essence, impoverished individuals are being criminalized because the image of poverty is deemed unattractive. May we all be so lucky to never be deemed so unattractive we are not allowed in public. As a physically disabled person, the employment of attractiveness in public places strikes a chord in me.”

“I think it is easy to feel uncomfortable facing the fact poverty does exist,” said Emily Connor. “If this local law does get passed those in poverty could be forced out and as a result the comfort of the general public may be preserved but at what cost. When we push out those in need for our own comfort we sacrifice an important part of our own humanity.”

Just one person spoke publicly in favor of the resolution, citing the public safety concerns of panhandlers in busy thoroughfares, but Town Attorney Michael Magguilli said the town has received a number of complaints regarding aggressive panhandlers.

“First and foremost this is a public safety measure and nothing more. It is meant to protect the safety of our residents and the panhandlers,” Magguilli said. “The town has no absolutely desire to infringe on anyone’s free speech rights or their ability to obtain assistance.”

Deputy Police Chief Michael Woods said police answered 95 calls for aggressive panhandling in 2019 which resulted in two arrests for outside warrants and the issuance of six vehicle and traffic tickets related to pedestrians. So far this year, he said, there have been 110 complaints with no arrests and three V&T citations given regarding pedestrian traffic.

“Usually the officers just advise them they have to stay on the sidewalk and they are not following the law and they are fine,” he told the Town Board.

Magguilli said his office and the office of Supervisor Paula Mahan have gotten a number of complaints as well as the Police Department and related the story of a woman who was followed into Hannaford Brothers by an aggressive panhandler who would not give up his demands for money.

He stressed his legislation did not target the message of panhandlers but the time, place and manner they sometimes employ. He said a similar law in the City of Rochester and others near public transportation in New York City have been upheld by the Court of Appeals, the state’s highest court. While the U.S. Supreme Court, he said, has not given a definitive ruling on whether or not panhandling is protected speech under the First Amendment, he wrote the law conservatively, with the assumption it was.

“I’ve been asked if this would this prevent Girl Scouts from selling cookies and the Salvation Army from ringing bells outside of the stores,” he said. “It would if you had aggressive girl scout running into traffic trying to sell cookies or if you had Salvation Army Santa Clauses doing the same thing.

Melanie Trimble, of the New York Civil Liberties Union said every law any municipality has tried to put on the books against aggressive panhandling that has been challenged has shot down by federal courts.

“Simply put the first amendment protects peaceful requests for charity in a public place yet in this proposals statement of purpose town officials specifically discourage people from asking their neighbors for help,” she said. “It is poorly tailored to the problem it purports to solve. We would all like to move towards a world where the homelessness and impoverished people are not forced to beg. But whether examined from a legal, moral, policy or fiscal standpoint criminalizing any aspect of panhandling is not the way to achieve this goal.”

The Local Law would ban panhandling from within 20 feet of any bank, ATM machine or check cashing business and it would apply to public and private parking areas and parking ramps and all public places.

Because of COVID-19 It would require panhandlers stay six feet away from the target of the solicitation and would make illegal to follow someone and continue to beg for money after the initial solicitation is denied. It would also make illegal for someone to block the safe passageway of a person and would prohibit solicitation in an areas readily visible to the occupants of a motor vehicle.

Violators can be fined anywhere from $25 to $250 for a first offense, and a second offense within a year could carry a penalty of up to 15 days in jail. In lieu of a fine the court could, with the town’s blessing, impose an alternative sentence “provided it is not an unconditional discharge.”

Barbara Rio-Glick said she does a lot of walking in town parks and around town in general.

“People come within six feet of me and often without masks. Am I allowed to call the police and have them arrested? Or does it only apply to poor people,” she asked. “Let’s not join the other American cities and towns who are attempting to aggressively criminalize panhandling in hopes of, as this proposal clearly states,  preserving the quality of suburban life.”

While Magguilli said the intent is not to target girl scouts or firefighters conducting a boot drive, Jessica Mahar said that’s not what the local law says.

“What about the guys who stand outside of plazas with signs asking people to shop. They are asking for money and they are distracting. And what about youth clubs holding car washes. They hold up signs along the road and they ask people for money. That is illegal under this proposal,” she said. “Find me a spot in the town where you can panhandle under this law. You can’t.”

Ryan Horstmyer spoke in favor of the Local Law, saying it is only a matter of time before someone is seriously injured along Everett Road near the I-90 overpass, a favorite place of panhandlers who stand in the medium and target drivers stuck at red lights.

Town Board member Melissa Jeffers said she and others on the board will explore options of making those who are on the streets panhandling aware of the public programs available for their benefit and perhaps bring some programs into the Town of Colonie to help out.

“The intent would not be about criminalizing the poor. For me it more about public safety. I firmly believe the law could play a part in developing a multi-faceted approach to solving the underlying issues that result in homelessness and panhandling.”