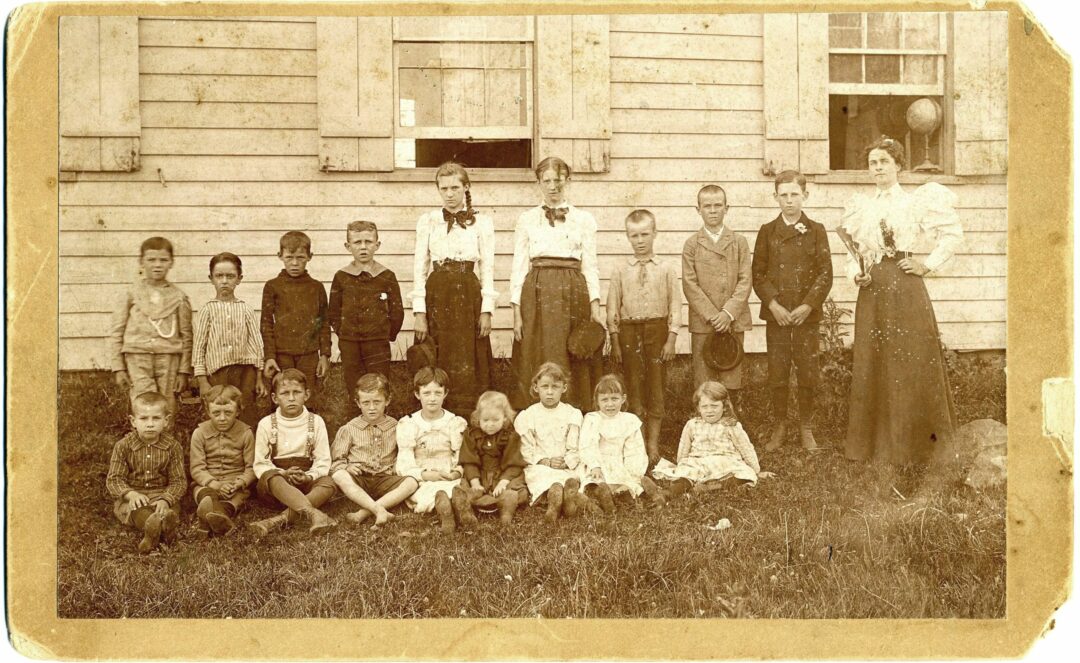 A photo dating back to 1893 shows 18 students of varying ages standing in front of the Boght School with their teacher. The school would continue to be used well into the 20th century. Town of Colonie

LATHAM — Skip Guptill remembers a metal pipe with a coat hanger on it. The area, a cubby as much removed as it could be, became Guptill’s locker space. A place he could call his own. At a one-room schoolhouse, scoring a space of your own is worth its weight in gold.

Guptill, one of the patriarchs of the Guptill brand, was a student at The Boght School, once located by the lot where Guptill’s Skating Arena now is, until he eventually landed at Cohoes High School.

“Everything was much simpler back then,” Guptill said. “We looked forward to going to school. We took it seriously and enjoyed the process.”

Guptill’s peer was Century House owner Tim O’Hearn. O’Hearn, a year apart from Guptill, remembers no misbehaving. With only 35 to 40 kids in the room total in the 1950s, each student was diligent and respectful of the one teacher responsible for six grades.

“Each row was one grade, and there were about six students in each row,” O’Hearn said. “Our teacher provided plenty of one-on-one attention to students and you were always ahead of the game because you listened to what was happening in the grade above yours.”

The schoolhouse, located in the Town of Watervliet before Latham was incorporated, taught its students real-life experience as well as academic aptitude. There was no silly business; no one came to school with the carelessness many students show today. Students wanted to be there and improve. Unlike today, where kids can occupy themselves with television and endless tech gadgets, school was the prime social event and the best way to keep busy.

“We all knew one another and were very friendly,” O’Hearn said. “There were no cliques or outcasts. We all were friends and got along very well.”

Guptill remembers the varying temperatures of the room. As the coal bin glowed, only one side would really feel its warmth. If you were sitting on the other side, at one of the desks with an inkwell attached, you were chilly.

Guptill and O’Hearn remember playing games, like one where you throw a ball over the roof of the building to a group on the other side. A recess staple, the game attracted all ages and became the ultimate bonding experience away from the books.

O’Hearn remembers students taking turns ringing the bell, an honor to whoever was bestowed the opportunity. Guptill, the owner of the house where the schoolhouse once was, still has the bell, according to O’Hearn.

The Boght School, also known as School No. 18, was established in the Watervliet School District. The district, founded in 1813, included this corner of Latham. Boght is the Dutch word for “Bend,” meaning the “bend in the river” where the Mohawk River makes a bend around the northern tip of Colonie, where Route 9 crosses the Mohawk.

Eventually, the growing school population forced a change, according to a document about North Colonie School District’s early history. The state was advocating for a centralized district instead of the dozens of stand-alone institutions.

“In time, the old Town of Watervliet (Colonie by 1895) had about two dozen school districts scattered throughout the nearly 60 square miles of the town,” Colonie Town Historian Kevin Frankin said. “By the mid to late 1950s, centralization divided the town into two main districts. The first to form was South

“Many of the original one-room schools were demolished,” Franklin continued. “Very few, like the Boght, were converted into private residences and remain. Probably the most prominent school structure, being the Verdoy School, which was donated to the Town by the North Colonie School District and moved to the grounds of the Pruyn House. The Verdoy School and the Pruyn House itself are National Register Properties.”

The Boght School is now a private residence. Guptill said the annex many people see on the home, now a laundry room, was once where the coal bin was. To convert the schoolhouse into a one-family residence, the Guptill family erected sensible walls, added modern fixtures and amenities and made it into a quaint but cozy abode. Guptill said he never intends to sell the house out of the family, calling it a piece of the area and something he wants to preserve.

The Growth of a District

Today, North Colonie schools, the district that services the area where the Boght School once stood, is developing faster than you can blink. The district currently boasts eight schools, six of those elementary schools sprawled across the expansive geography that is Colonie and Latham.

The elementary school that services the particular area, Boght Hills Elementary, has 522 kids in grades kindergarten through six, according to niche.com. The student to staff ratio is 17 to 1, a more one-on-one experience than the schoolhouse’s 35 to 40 students to one teacher.

It isn’t only the elementary school that increased the population of its student body by a huge amount. In the 2016 to 2017 school year, the whole district taught over 4,000 students, according to data.nysed.gov. Of those students, males and females were an even 50 percent of the population. A diverse student body, with 31 percent of students identifying as either black, Asian American, multiracial, Native American, Hispanic or Pacific Islander, was reported. This is a stark contrast from the smaller, farming-based population of School No. 18.

According to a press release by North Colonie School District, New York State granted an extra $1 billion in education funding in April 2018, meeting a need for more resources.

“The newly approved state budget calls for total education spending of $26.7 billion, which represents an increase of 3.9 percent,” according to the press release. “The overall state aid increase includes $619 million in additional Foundation Aid and growth of $240 million in reimbursements for designated expenses such as transportation, construction and BOCES services. These two categories – Foundation Aid and expense-based reimbursements – are the predominant sources of state funding for everyday school operations.”

North Colonie Superintendent D. Joseph Corr said the school is continuing to adapt to the growing student body, using innovative techniques and existing resources in different ways to make the most of what it already has.

“We are committing more resources to English as second language programs, special education programs and the expanding need for mental health support in our schools,” Corr said. “We are hosting continuous professional development courses for staff to meet these growing areas and hiring more staff as well.”

Corr added the district, which is expanding the buildings itself, is allocating different spaces of various sizes for these programs. The district’s main goal — creating, innovating and discovering — hasn’t changed despite the challenges it faces with the booming population. Corr said the needs of students has changed as much as the population, forcing the district to take a different approach than it once did. While the district is receiving more aid through state aid and receives revenue from property taxes, Corr concedes the aid doesn’t fully meet the needs and expenses of the district.

“We’ve had to rethink, reinvent and recreate ways to use our existing resources,” Corr concluded. “We’re always dedicated to keeping the needs to students and families forefront while staying mission-focused on meeting academic and social needs.”

When Things Were Simpler

O’Hearn and Guptill feel they received the best education they could have from a school structure that is no longer feasible. Both have gone on to become revered names in the Capital District and successful businessmen who contribute to the community in many ways.

“We succeeded because we had real-life experience,” Guptill said. “Our families were in the business before we were, but we were able to apply our education to our lives.”

Guptill added he worries about how education has changed. Students are now transfixed with screens, able to access a multitude of things he wasn’t. He referenced how kids can turn on a television and watch “15 murders a day.” While he and his peers were often born and raised two to three miles from home, students now are a bit more nomadic.

“There is a quote I once read that talks about the mourning of common sense and parents attacking teachers for doing their jobs,” O’Hearn said. “Teachers can no longer control unruly children. Schools need parental consent for everything. There’s no aspirin and no sunscreen.”

O’Hearn ended up at Christian Brothers Academy, a different world than Guptill at Cohoes High School. Yet, both agree they were well prepared for the next step. Because CBA was so regimented, it wasn’t far off from the respectful population at Boght. Guptill was a bit more overwhelmed, but soon adapted to the change of pace.

“When [The Boght School] was open, that’s when we were truly free,” Guptill said. “That’s when America was what it’s supposed to be.”

A step forward with Community Choice Aggregation in Bethlehem