DISCOVER MENANDS: Albany Rural Cemetery is a who’s who of local, national history 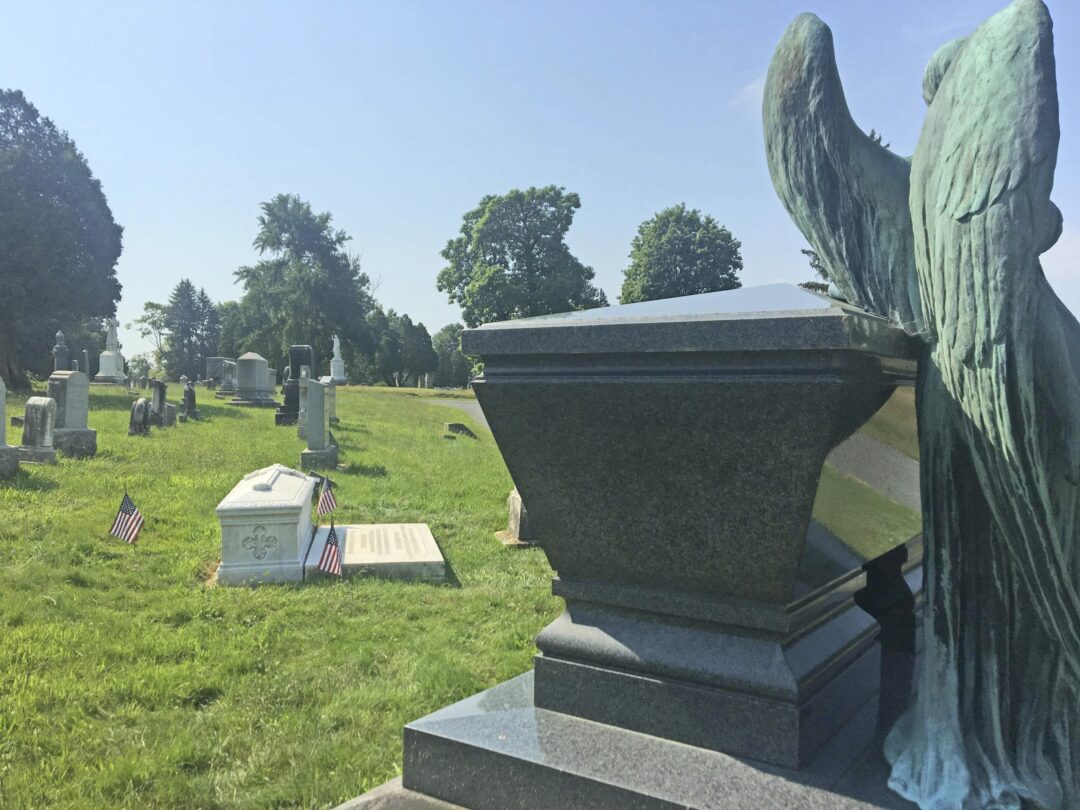 A trapeze artist falls and dies the day before her birthday. A 16-year-old drummer boy is killed at the Battle of Antietam. A young woman is thrown out of a carriage to her death in the same park she will be buried in.

On the edge of Menands and Colonie, the cemetery is 467 acres of hills and fields scattered with gravestones. Its natural landscape helped David Bates Douglas design a space with three ridges: north, south and middle. Cemetery Trustee Mark Bodnar explained, “The cemetery was incorporated in 1841… It’s one of the first rural cemeteries that was established in the United States during the rural cemetery movement of the mid-1800s.”

Cemetery historian Paula Lemire added, “we officially opened to the public in 1844,” which makes this year the 175th anniversary.

In 1844, “[the cemetery] had a huge consecration ceremony in what’s now a wooded ravine… there was a huge ceremony, with parades from Albany to the cemetery and then the following year [was] our first burial,” said Lemire.

The first internment in Albany Rural Cemetery was that of David Strain, who died at age 20 of consumption. A stone marks the historic event, yet ironically states the word “cemetary.” The misspelling must have been overlooked by the stone carver, John Dixon.

Dixon carved many stones for the cemetery. Bodnar quoted from a book by Phelps, “The cemetery is an outdoor sculpture museum containing hundreds of examples of Victorian cemetery art…” He continued, “on this site, they used to have back in the 1800s, maybe into the early 1900s, three stonecarvers… so the ornate examples that you’ll see out there, like some of these headstones, are really beautiful.”

And, that it is. A short walk around the grounds provides a view of hundreds of headstones, monuments and mausoleums dedicated to the dead.

But just how many people are buried here? In fact, it’s hard to know for sure.

“One reason we don’t have a precise count is many bodies were moved here from older churchyards and especially from what became Washington Park,” explained Lemire.

municipal burial ground divided into churches. Lemire said the park had “a Dutch Reform section, a Protestant section, a Methodist section, and then the Potter’s field… about 14,000 graves were moved from [Washington Park] in a mass reburial here [at Albany Rural]. Also, families had a chance to move bodies on their own and not all of them registered them with the office. So we don’t have a precise count.”

In fact, the Albany Rural Cemetery is a place of rest for thousands of people from all walks of life. The cemetery is non-denominational and has every religion and faith represented in addition to soldiers from every major war since the Revolutionary War, as well as some former slaves. A lesser-known fact? Albany Rural is an active cemetery and still has burials today.

Bodnar stated, “It’s a lot of people,” Bodnar stated. “But for an upstate cemetery, of course being near the capital of Albany, there are quite a few prominent people that are buried here.

“The majority of Albany’s mayors are buried here, the Van Rensselaer’s, the Schuyler’s, and of course President Chester Arthur is buried here,” said Lemire.

One of the major monuments at Albany Rural is the Van Rensselaer monument. The prominent family migrated from the Netherlands to Albany and were extremely influential in the development of the area. When their original family burial vault, at their private estate, was broken into by grave robbers, the vault was moved to Albany Rural. In the underground vault lies the family, most notably Stephen Van Rensselaer III and his wife, Margaret (Peggy) Schuyler Van Rensselaer.

Also at the site is a monument for Peggy’s father, Gen. Philip Schuyler. Schuyler is famed for being a general in the American Revolution, a member of the Continental Congress and served in the first United States Congress as a New York State Senator. Fans of the musical “Hamiton” will recognize him as the father of the “Schuyler Sisters” and father-in-law to Alexander Hamilton, the first Secretary of the Treasury of the United States.

It is speculated that Gen. Schuyler may not actually be buried with the Van Rensselaer’s, but the vault has not been opened for over a century, so there is no way of knowing if Schuyler is actually buried there.

Another grave that is not entirely what it seems is none other than Chester Arthur’s. The 21st President of the United States, Arthur’s memorial includes a stunning $10,000 monument designed by Ephraim Keyser, complete with a presidential seal. Each year on October 5, Arthur’s birthday, the cemetery holds a ceremony that includes a wreath provided by the White House.

So why is Arthur’s grave in Albany?

Born in Vermont, Arthur attended Union College. His father was a minister in the area and his family had a residence in Loudonville and a family plot at Albany Rural Cemetery.

But Arthur is not buried underneath his monument. Behind his monument is a beautiful white grave, under which lie the remains of his wife. Ellen “Nell” Arthur passed away from pneumonia the year before her husband was elected to the vice-presidency. When Arthur passed away in 1886, he was buried directly next to his wife, a few feet behind his presidential monument.

Ellen Arthur’s monument has been extremely prominent in recent years for the cemetery. Her stone was one of the first major stones to be cleaned and restored.

“Another thing that we have been doing in the last year or so is that we have been cleaning some of the historic monuments,” explained Lemire. “We have a volunteer who is now a board member who has taken the lead… he started with family stones and then he moved on to cleaning Chester Arthur’s wife’s monument…”

The most famous statue in the cemetery, the Palmer Angel, has also been cleaned. Sculpted by Erastus Dow Palmer and commissioned by Robert Lenox Banks, the Angel at the Sepulchre represents Banks’ love and mourning for his wife, Emma, who died in childbirth.

Over time, many stones can become worn. Of the Palmer Angel, Lemire stated, “It was so crusty and dirty… but it was cleaned last spring and it’s spectacular now.”

Trustee Tyler Kattrein has not only cleaned the angel, Ellen Arthur’s grave and many family stones, but also teaches volunteers how to clean stones, enabling the cemetery to slowly but surely get restored. The technique of cleaning the stones must be done “very carefully… He uses the same protocol that Arlington National [Cemetery] uses, which is very safe for the stones.”

Another spectacle of the cemetery is the abundance of mausoleums.

Bodnar commented, “there [are] a ton of different mausoleums here. There’s the main mausoleum, the cemetery mausoleum, there are private mausoleums, I don’t know how many…” Lemire added, “You know we’ve never really counted them and some of them are like miniature castles, some of them look like chapels — they are very beautiful.”

She also explained that a few of the mausoleums have Tiffany glass windows. Designed by Louis Comfort Tiffany and others, these windows were produced from 1878 to 1933 and were modeled after the Victoria and Albert Museum in London, England. Lemire said, “we got a tip from a historian in California, who said ‘you might have one’ and we may have up to 30 [windows].”

So many stories have been laid to rest at Albany Rural, and each day the trustees uncover more.

Bodnar stated, “I am known as the Civil War guy because that’s the niche that I took… There are people that have been researching different things here in the cemetery. Paula researches everything, Michael Huxley focuses on stone cutters, Michael Radlick does more of nature walks and things like that… so there’s just a myriad of different interests that people volunteer to research.”

Other notable graves include Kate Stoneman, the first woman admitted to the Bar Association, Lydia Mott, an abolitionist and friend of Susan B. Anthony, Gilbert Tucker, a first-class passenger and survivor of the Titanic, as well as 27 Civil War generals and three confederate soldiers.

“In many different facets, we here at the cemetery like to promote the history of the cemetery,” said Bodnar. “We’ll do different tours, presentations in our chapel up the road, powerpoint presentations,” as well as off-site lectures and walks with the Audubon Society.

Bodnar emphasized, “It’s all based on educating people about this gem that we have here of local history.”

The cemetery offers many walking tours, reenactment tours and events. Themes include nature, the Civil War, notable figures and date-specific tours like haunted Halloween. The Friends organization produces newsletters and members of the Friends are invited to special events.

Both Bodnar and Lemire emphasized the incredible history that they want to share with the community. Albany Rural Cemetery used to have its own train station and was a place where “people could take a stroll, bring a picnic lunch and spend an afternoon at the cemetery.” The grounds are beautiful kept, with plenty of grassy areas to sit, along with extensive hiking trails in the ravine.

In the past, Albany Rural Cemetery was a place for people to congregate, to have fun. It tells the stories of heartbreak, friendship, war and love in each and every gravestone. Looking ahead to the future, it is time to honor the rich history of all lives at rest. Visit the cemetery, learn from the past and never forget… stories are meant to be told.

Albany Rural Cemetery is located at Cemetery Avenue in Menands. For more information on tours, events, or hours, visit https://albanyruralcemetery.org/ or call (518) 463-7017.

LETTER to the EDITOR: Fall means it’s time for the CYC 5K