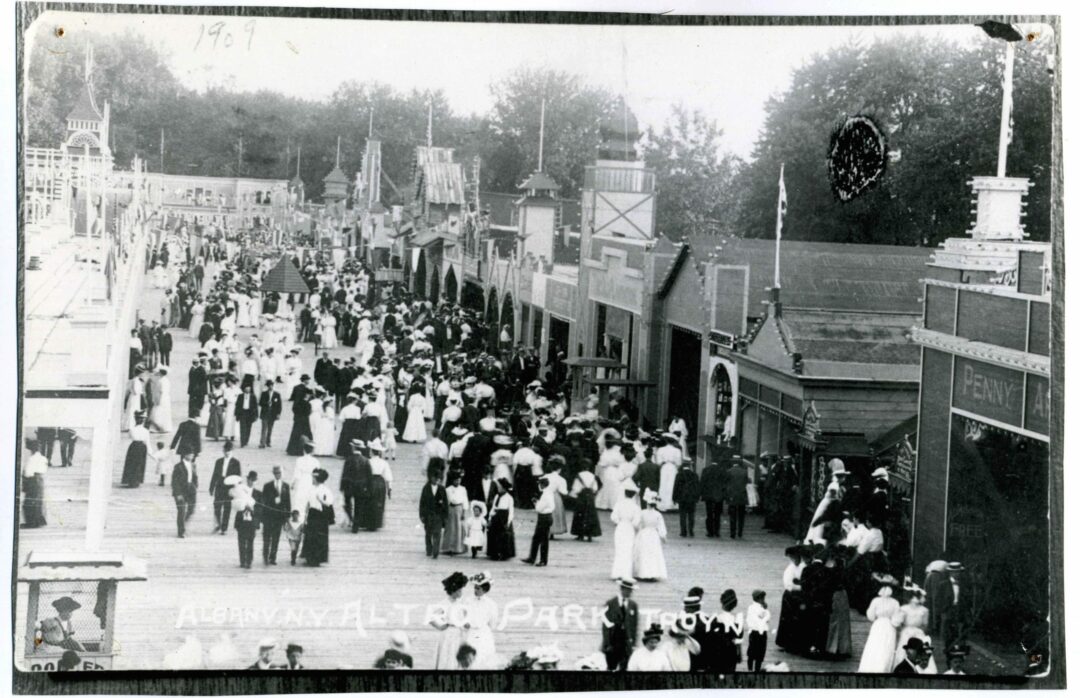 Colonie Town Historian Kevin Franklin provided this 1909 photograph of the Al-Tro Park, showing how crowded it was and including signs for a penny arcade and a rollercoaster. Kevin Franklin

MENANDS —  Older generations may remember the Al-Tro Park, a historic amusement park on upper Patroon Island in Menands that existed from the late 19th to the early 20th century. It was known under different names like “Pleasure Island,” “Dreamland,” “Midway Beach Park” and “Lagoon Island Park.”

At the time, it was separated from the mainland by the Hudson River and the Erie Canal, making people take an electric trolley or steamship to access the amusement park. Today, it is near impossible to find any physical traces of it left as what stands on its former property are sections of Interstate 787 and a few businesses along Simmons Road — sandwiched between Broadway and the Hudson River.

Colonie’s Town Historian Kevin Franklin said he is unsure what year it technically first opened and closed, as his office had limited preserved historic documents about the park.

However, an archived June 30, 1985 issue of the Troy Record indicated the park opened on May 27, 1907 — Memorial Day. It added that it was run and managed by Max Rosen with an investment of around $100,000; Rosen believed it had “eclipsed Coney Island. The great has been accomplished in three months with a force of 400 workmen, all experts.”

The name “Al-Tro Park” or sometimes “Altro Park,” is a portmanteau of Albany and Troy, the two neighboring cities the amusement park mainly served. Franklin said it was owned by the Albany-Troy Steamboat Company and admission was either a nickel or a dime to get in.

According to a historic tax document which listed the number and dimensions of each ride, booth and amenity inside, the amusement park took up 45 acres and contained 23 attractions. These attractions included a 900-by-40-foot boardwalk, a dance hall, a pony track, a merry-go-round, a two-story castle structure, an amphitheatre, a cane stand, a shooting gallery, a popcorn booth, a penny arcade building and a photo gallery. Amenities included six jacket booths, a restaurant, two bath houses, a shed and office likely for on-site employees, and a loading dock for visitors to enter or leave the park via steamboat.

Franklin said the amusement park had its own police department.

He showed a 1909 photograph, indicating it had nine members that year and were collectively known as the “Al-Tro Park Police Force.”

The aforementioned Troy Record article noted that the police department had started in 1907 with 15 men though.

Franklin said the Al-Tro Park was among numerous amusement parks and recreational areas along the Hudson River between Troy and New York City during the early 20th century.

“The river was actually polluted at the time because there was no such thing as a waste treatment plant so people and cities just dumped their waste into the river,” he said. “But it didn’t prevent the river from being a spot for people to enjoy the nice cool breeze, steamboat rides, food and bands onboard, and taking trips. While it was a mostly pleasant experience, many people ended up with hepatitis from the water though.”

The park’s decline began when circa-1912 flooding affected many communities along the Hudson, including Troy and Menands, and the build-up of ice from the winters on the river also negatively affected Al-Tro Park.

According to Albany Archives, a blog devoted to remembering Albany history, a fire broke out in an ice cream booth on Sept. 14, 1913 at around 6:30 p.m.

This destroyed the boardwalk and Franklin said “there was probably no way to fight it” because fire trucks could not easily and physically get onto the amusement park to extinguish it.

This caused Al-Tro Park to move inland to just west of Broadway in Menands sometime in the 1920s, said Franklin, and was renamed Mid-City Park.

Remaining open through the 1950s, he said it included an Olympic-sized pool, a sand beach, and rides like a roller-coaster and a roller-skating rink.

However, Franklin said no African-Americans were allowed in Mid-City Park and around 1956 or 1957, a young black woman was denied entry.

According to him, she sued the park and this was eventually brought to the state Supreme Court, where the latter sided with the woman on the basis that the park is a public venue.

When the park’s then-owner did not support the decision, Franklin said, “the Court threatened like fire that would bankrupt it and they closed the park out of spite.”

Although it finally closed around 1960, when asked why the amusement park concept was able to stay alive for decades, Franklin simply concluded, “Menands is a great place for people to leave the city and it’s nice that it’s between Albany and Troy.”

While historic records of the park may seem scarce, his office still contains numerous photos to remind locals that they once had their own version of Coney Island.