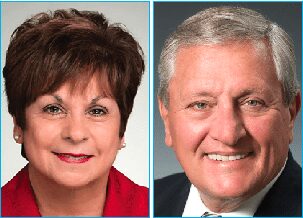 In addition to moving $1 million from other areas of the budget to pay for paving, Scaringe is proposing to take $1.5 million from mandatory mitigation fees paid by developers within the town’s four GEIS areas — the airport, Boght Road/Columbia Street, and Lisha Kill-Kings Road. The areas encompass some 15,000 acres of land that are attractive to developers. He would also dedicate any increases in sales tax revenue to paving.

“For over a decade the current administration has neglected the town’s roads and has not provided the necessary funding needed to adequately pave, repave and perform preventative maintenance on our roads and infrastructure,” he said. “This failure, coupled with a development policy that has resulted in massive growth, has strained Colonie’s infrastructure to the max. As a result, we have streets full of potholes, constant water main breaks, inadequate drainage systems and entire communities that haven’t been re-paved in decades.”

Supervisor Paula Mahan, who is seeking her seventh two-year office, said while increasing the money spent on roads sounds nice it just isn’t feasible. She also accused Scaringe of “not understanding the budget.”

“I don’t know where he is going to get that extra money,” she said. “The budget is very structured, and very conservative. We spend about $2.5 million a year on paving and the only place you will find extra money is if you lay people off like police or EMS and I would not advise doing that.”

“We know the budget inside and out and we worked it from near bankruptcy to where it is now. It’s not like you can just find money to do these things,” Mahan said. “If you tell people you can do more, some really critical things would suffer and I don’t think he understands the budget at all. He has never asked about the finances but our controller’s office and our financial people are always available to anyone who has any questions about the budget.”

Jack Cunningham, the Department of Public Works commissioner said taking money out of GEIS mitigation funds may “sound great” but it’s not only not practical, it’s illegal as it stands now.

“The whole point of the GEIS is to predict the infrastructure necessary to support future development in those areas,” he said. “As people come into the area, they pay into the GEIS and how much that is is pre-determined within the scope of the GEIS.”

Mitigation fees are formulaic, he said, and based on those infrastructure needs within the GEIS. To take money out of it would require modification the GEIS documents from a legal and engineering standpoint.

Right now the town paves between 10 and 12 miles of roads per year at a cost of about $2.5 million. Which ones get re-paved are on an as needed basis. Depending on the volume of traffic some roads can last a decade of 15 years and some more than 25 years. While there are some 83,000 residents living in town, there are some 250,000 who commute through it on a daily basis.

There are about 320 miles of road the town is responsible for maintaining with more added each year. As developers add subdivisions and other structures, often times a new road is built and deeded to the town once the project is complete. Paving money comes from the town budget as well as federal and state funding. A portion of the gasoline tax every New Yorker pays is earmarked to help municipalities to pave roads.

Scaringe said he would “appoint professional construction and engineering staff to oversee the DPW, and prepare a plan to utilize greater volume procurement savings with local municipalities and recommend new policies to establish both “catch up and sustainable long term road and infrastructure funding.”

“Accepting roads without a funded maintenance program is like adding spending to the national debt, creating liabilities that future generations will bear; I won’t do it,” he said.