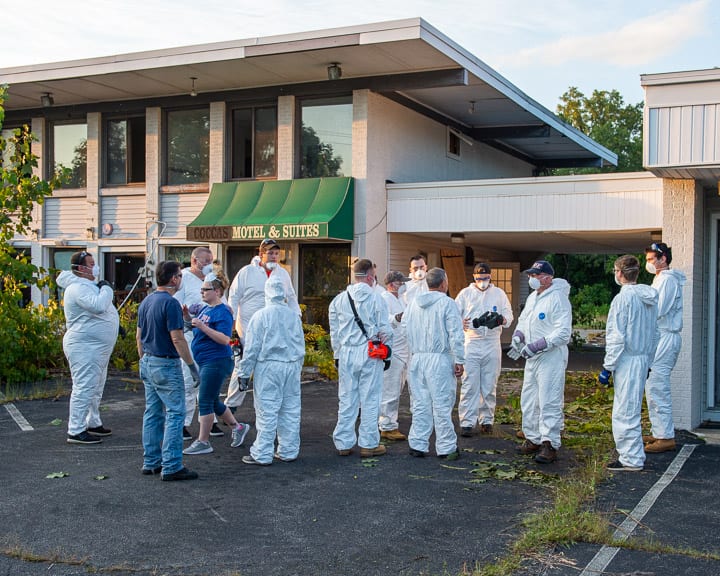 COLONIE — A long-standing eyesore along Troy-Schenectady Road is getting a new use for at least a year — as a training facility for the town’s 12 fire departments.

The rotting Cocca’s Motel and Suites was sold to New Country Lexus, a subsidiary of the New Country Auto Group, and that business struck a deal with the Verdoy Fire Department, located directly across Troy Schenectady Road, to use the facility, said Assistant Fire Chief Nick DiNovo.

“We will conduct various fire skill training from search and rescue operations, fire attack operations, ventilation operations and different skill sets we use day in and day out,” said DiNovo, who was heading up the workforce. “We don’t get these types of buildings often so when we can get an acquired structure, it is a good opportunity for us to hone our skills so we are going to take advantage of it.”

He said about 15 years ago, there were four houses where the Verdoy Fire Department now sits and firefighters used those structures for training before they were demolished.

According to the Albany Business Review Cocca’s, which owns two hotels on Wolf Road, the 90-room Travelodge and the 45-room Cocca’s Inn and Suites, signed a contract with New Country in 2015 to purchase the Route 7 hotel. The multi-state automobile dealership based in Saratoga, had plans to demolish the building and move its Lexus dealership there from Route 9.

The hotel was closed around that time, but has sat vacant. The restaurant Otis & Oliver’s used to operate out of the hotel and was a popular spot until moving to the Mill Road Acres Golf Course in 2012.

Tabor Dunn, the facilities manager at New Country Auto Group said they allowed a fire department in Florida to use a strip mall the company was demolishing to make way for a dealership for a similar purpose.

“It’s been vacant for a little bit and the fire chief came over and spoke with me and they don’t get the ability to use a facility like that so we are giving them permission,” he said. “New Country tries to give back to the community when we can and we thought it was the right thing to do. It’s just going to eventually get torn down so we may as well let them use it.”

He said plans are to build a car dealership at the site at some point but when that will happen or what dealership will go there has not yet been determined. New Country sells Toyota, Lexus, Audi, Mercedes and other makes of automobiles.

For at least the next year, the town’s 12 fire departments will use it as a training facility. On Tuesday, Sept. 3, some 40 firefighters from various departments were on the site cleaning out the rooms, removing brush and boarding up the doors and windows.

The town fire departments, and a number of other Capital District fire departments and other public safety organizations, will make use the training facility on Wade Road, but having a real life structure is better to simulate real life situations.

“We have the burn tower, which is handy, of course, but it’s all aluminum,” said Verdoy Second Assistant Chief Ryan Carmichael. “Anytime you can get something like this, and we can do real life scenarios, it better practice than we can get at the tower.”

For example, a simulated roof cut at the tower may entail using a multi-use, heavy duty demolition saw to cut through a piece of aluminum or other type of metal. The hotel, though, has a “good thick roof” which will allow firefighters the opportunity to practice on something close to what they will encounter in the field.

Other real life scenario the firefighters will practice is breaching a wall, or going through a wall from one room to another, if an exit is blocked or an alternate exit route is necessary. Eventually, provided the necessary permits can be secured, the departments may use the hotel for controlled burns and let the firefighters practice putting out a real fire on a real building.

Sara Wiest, a spokeswoman for the town, said the deal was between New Country and Verdoy and had only two conditions attached: the Fire Department first clean the place up by removing the overgrown brush and then keep it boarded up to prevent squatters from entering, and that anyone who uses the building for training have an insurance waiver in place. She said each department carries its own insurances so that should not be a problem.

The town did donate the use of a bucket loader to help clean out the rooms and two dumpsters — the majority of which were quickly filled with carpets, draperies, furniture and other miscellaneous garbage pulled out of the rooms on Tuesday.

The hotel was a prime target for the homeless and vagrants looking for a dry place to spend a few nights. In August, 2017, a man in his 40s was found dead in the parking lot behind the hotel. He and a female companion had been staying in one of the rooms when she found him unconscious on the pavement. There were no signs of foul play, but a cause of death was not released at that time.

Outside of a lot of mold, most of the rooms were in surprisingly decent shape, DiNovo said, and the ones that were not, the volunteers there on Tuesday stayed out of them.

While the departments can use the building for at least a year, there is no set date to when it will get turned back over to New Country.  Training is slated to begin the first week of October.

Belle-Skinner has a siren’s voice that captivates