Program would allow Colonie EMS to get paid for home care 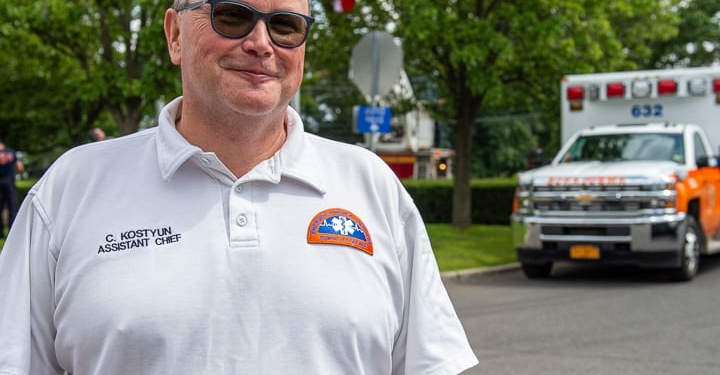 COLONIE — One of the initiatives at the EMS Department the new chief, Chris Kostyun, who was sworn in on Thursday, Aug. 22 to replace the retiring Peter Berry, is what’s called ET3, Emergency, Triage, Treat and Transport.

It is a five-year pilot program established by the federal government that will allow EMS to treat a patient onsite rather than automatically transport them to a hospital. And since so much of an EMS Department’s budget is based on fees collected for ambulance service, Medicare, and possibly outside insurance carriers, would pay the town nearly what it would pay for a ride to the hospital.

The difference though, would be justified because the turnover time at the hospital, where a paramedic or EMT has to wait to hand off the patient to a staffer and then file a report. That step would not be necessary if the patient is treated in the home and it would save other ambulance crews from having to fill in for the ones stuck at a hospital for up to 90 minutes at a time.

Under the ET3 model, the federal Centers for Medicare & Medicaid Services will pay participating ambulance suppliers and providers to:

• Transport an individual to a hospital emergency department or other destination covered under the regulations,

• Provide treatment in place with a qualified health care practitioner, either on the scene or connected using telehealth.

“The model will allow beneficiaries to access the most appropriate emergency services at the right time and place,” according to the CMS website.

Currently, Medicare only picks up emergency ambulance services when individuals are transported to hospitals, skilled nursing facilities and dialysis centers. Most beneficiaries who call 911 with a medical emergency are transported to one of these facilities, most often a hospital’s emergency department, and while they may not need the type of care provided for there, the ambulance service needs to get paid somehow so that’s where they end up.

Medicare would pay the base rate for an ambulance trip but no mileage so reimbursement would be comparable but as mentioned above, time spent at a hospital can be costly across the board.

Ambulance revenue is critical to an EMS Department’s budget. In Colonie it makes up about 87.3 percent of the entire $6.1 million budget. In 2018, ambulance service generated $5.4 million and another $56,000 from various training and re-certifications the department conducts. Direct operating costs were about $4.3 million while employee benefits cost about $1.5 million debt service for equipment and station maintenance costs about $350,000 a year.

Under the program, Medicare would pay EMS for services outside the narrow that narrow scope and in theory it would be more cost effective and, more importantly, provide better health care service to the patient whether it be transport to the hospital or if they are treated at home.

“It’s counterintuitive to only compensate ambulances to transport people to a hospital when it may not be the right thing for the patient or the system. Sometimes it just makes sense to spend an hour with a patient rather than be forced, economically, to take them to the hospital,” Kostyun said. “It would change the way we do business and it is one of the things we have to prepare for.”

Depending on the nature of the call, treating a patient at home would require some new technology. For example, one requirement is to have a teleconference between the patient, the paramedic and either a hospital physician or a primary care provider.

If the federal government sets the stage, it could incentivize private insurance companies to come aboard too, Kostyun said.

Supervisor Paula Mahan said the town does partner with Landmark, which is a similar system but the patient already has a preliminary care provider who can provide instruction over a phone. Like ET3, EMS would provide care in the home.

The pilot program is open to EMS departments across the country and it is competitive, Kostyun said. Colonie, with 83,000 people is on the smaller side of what the federal government is looking for so the town is looking to get other agencies and private ambulance services in Albany County on board before the application is due next month.

ET3 is one of the things Kostyun has to worry about now that he’s the new chief, but he has served in about every capacity — from volunteer to assistant chief — so he knows the department and knows the day-to-day operations won’t need to change much.

“We have fantastic people who, day in and day out, do their job very well,” he said. “That is what has made this department such a success and that is still be going to be the key to our success going forward.”