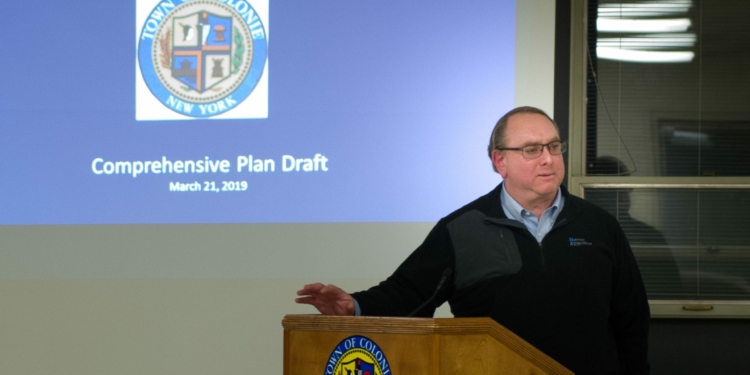 Chuck Voss, of Barton and Loguidice, at a public hearing on the Comprehensive Plan (Jim Franco/Spotlight News)

COLONIE — After more than three years of work, months of public hearings and thousands of dollars spent, the Town Board approved an update to the Comprehensive Plan.

There was no public comment prior to a unanimous vote of the Town Board. In fact, the entire meeting lasted just about 20 minutes.

The plan, an update to the one passed in 2005, will be a gauge for town officials in regards to development, recreation, public safety, public utilities and every other aspect of living in Colonie.

The Comprehensive Plan does is not in any way legally binding but from the plan, officials will generate land use law and zoning regulations that will govern how development progresses in town.

Despite some consternation with how the plan was put together, it got bipartisan support from the Town Board members.

“We have not left a stone unturned and after all the meetings we had I think we have said it all,” said Republican Town Board member Jennifer Whalen.

“I think it is a good vision for the next 10 years,” said Democratic Town Board member Linda Murphy.

The process started in 2016 with the appointment of a Comprehensive Plan Advisory Committee and the hiring of the engineering firm Barton & Loguidice. The process was delayed a few months because the employee there who was heading up the update took a new job out of the area.

Chuck Voss took over the task of gathering data and incorporating the vision of CPAC into a workable document that was turned over to the Town Board for consideration in March. The Town Board, after holding several public hearings, some lasting for hours, made some minor modifications in how data was presented and within the document before declaring it complete in June.

The majority of changes included a better presentation of data collected over the three years and a better comparison to goals and objectives laid out in 2005 and those laid out in 2019.

Many of those who spoke against the plan, or how the plan was put together, are members of the grassroots group SAVE Colonie, a Partnership for Planning. No members of SAVE were in attendance when the board approved the plan on Tuesday, July 23.

George Scaringe, though, a Republican taking on Supervisor Paula Mahan, put out a statement saying it does not “do enough to stop the out-of-control development and subsequent traffic congestion that has become synonymous with the current administration.”

Calling the plan a “flawed document” he said it misses the mark on a number of points including failing to promote business corridors, failing to conserve and protect open space and failing to “address the deteriorating quality of life caused by unbridled development.”

“Sadly, this document is a testament to the fact that the current administration is either unwilling or unable to put the needs and interests of residents above those of the developers,” concluded Scaringe.

The three Republican members on the board, though, Whalen, Chris Carey and David Green, all voted in the affirmative and only Whalen spoke prior to her vote.

Basically, the plan breaks out goals into categories on when they should be achieved: ongoing, short term, medium term and long term. It also says the Planning and Economic Development Department should follow and track the progress of each objective to see if the town is following through with what is in the plan.

The recommendations are broad on their face like “maintain the town’s high level community services for youth, seniors and the public at large” and to “ensure an efficient and fair development approval process.”

• Over the next year to ensure an efficient and fair development approval process that is predictable, transparent and protective of the town’s environmental and the residential character of its neighborhoods.

• Over the next three to five years “protect the town’s significant cultural and historic resources.

• Over the next two to five years “enhance and expand active and passive recreational resources available throughout the town to meet the growing and changing demands for these amenities.

• Over the next two to five years “conserve a town-wide network of open lands including but not limited to viable farmland, wildlife habitat, special or unique environmental resources and potential trail corridors, river access and recreational areas.

• Over the next five to 10 years, the town should “update the 2019 Comprehensive Plan.”