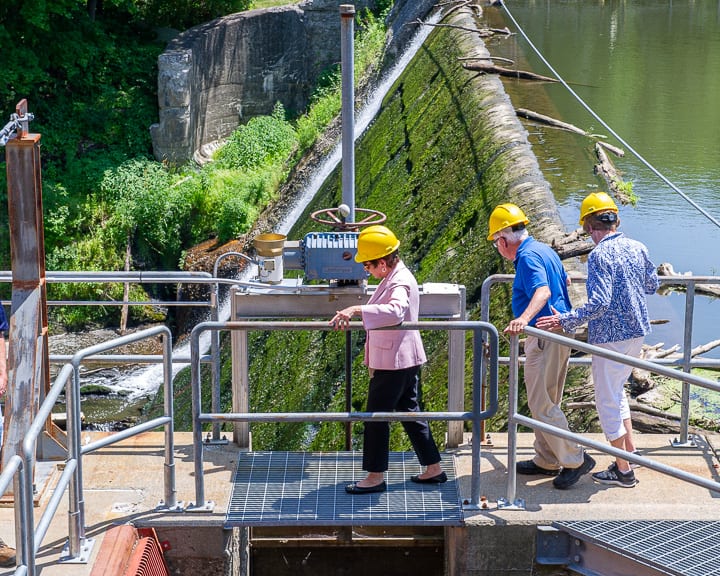 SCHUYLERVILLE — Centuries ago, man learned to harness water’s potency and today there is a renewed interest in the “original renewable energy.”

But, there will not be an extension cord running down the Northway to Town Hall.

In what is a complex, often murky world of the New York state power grid, the town will buy about half of its electricity from power generated from waters of the Fish Hook Creek for 20 years and National Grid will credit the town’s bill. While it is difficult to determine the exact financial benefit to the town since it depends on usage, fluctuating delivery charges and other factors, but town officials say it will save $400,000 in the first year, cutting the $2.2 million electic bill by up to 20 percent.

The deal is being called a win for everyone involved: Colonie gets a break and stabilizes its electricity bill, hydroelectric power reduces the town’s carbon footprint so Mother Earth gets a break from fossil fuel generated electricity  and those in the hydro business get a paying customer for 20 years.

That last part is important because while hydro plants are built to last, the one in Schuylerville is 100 years old and needs upgrading and upkeep. It’s not unlike scores of other facilities along creeks and streams in towns across upstate New York, built decades ago to power manufacturing plants and are now being used to generate electricity for the grid.

level,” said Supervisor Paula Mahan. “It will offset 50 percent of our carbon footprint and greatly reduce our energy bills. Plus, our purchase of local hydropower is great for the environment and our regional economy.”

The deal was facilitated by the Municipal Electric and Gas Alliance, a New York not-for-profit collective with nearly 300 member local governments and public agencies. In 2014, MEGA selected Gravity Renewables, through a competitive process, as the preferred provider of energy from small hydroelectric sites across the state.

The Schuylerville Hydroelectric Facility, located right in the middle of downtown in the small village just east of Saratoga Springs, is operated by Brookfield Renewable in much the same way as it operated in 1919, when water from Fish Creek first spun the same massive turbine that is spinning today.

A dam was built sometime prior to 1919 to create a reservoir and the majority of the water is captured and piped about a quarter mile down a slight but steady hill to a power station, said John Elmer, director of operations at Brookfield. The pipe — that has a 9-foot diameter with the majority of it still made out of wood slats held in place with steel hoops — is called a penstock, and the system allows enough water into the former creek bed to allow fish and other invertebrate to survive.

The turbine’s inner workings were just upgraded, but the housing and the major components are the same as those installed 100 years ago. It is a simple formula and one that is time-tested and effective.

Once the water, travelling at 400 cubic feet per second, hits the power house, it spins a General Electric turbine to create electricity, which is then captured and sold to National Grid.

“There is a meter at the substation and that meter belongs to Colonie. It has their name on it,” said Omay Elphick, director of project development at Gravity Renewables. “When we generate electricity here for Colonie that meter spins backwards and it is generating a credit and the power company will credit Colonie for that electricity. It’s a virtual extension cord in the accounting department.”

Harnessing water’s power has been going on for centuries, with the

In 1882, the world’s first hydroelectric plant was built on the Fox River in Appleton, Wisconsin. It produced enough juice to provide electricity to the paper plant that built it, the home of its president and another nearby building.

Today hydropower is the largest source of renewable energy. According to the U.S. Energy Information Administration, 11 percent of energy in this country came from renewable sources in 2018 with water generating 23 percent, wind generating 22 percent and biofuels and wood generating 20 percent each (see graph.)

There are some advantages to water, opposed to newcomers like solar and wind. For starters, it is tried and true and has withstood the test of time. The plants are relatively innocuous — unlike the towering windmills or sprawling solar farms — and are already built along creeks and streams in small towns all over the country including upstate New York. Many got their start to power a single factory just like the one in Wisconsin. While there is waste involved while generating any type of energy, it is a fraction of what is released while burning a biomass like wood or garbage.

Also, and perhaps more importantly, it is the only renewable that man can control. A reservoir’s water level is dictated by the dam and a series of spigots and it can be “banked” if there is a lack of rain or during late summer after snow melt is long gone. Obviously, wind mills only work if there is a breeze and solar panels only produce if the sun is shining.

The reservoir itself can help control flooding and can be used for drinking water, agriculture or recreation, according to studentenergy.com, an online think tank dealing with energy issues.

There are some negative impacts to the local ecosystem when the natural flow of a creek is disturbed, but the benefits over fossil fuels and the carbon dioxide they emit, far outweigh the inconvenience to fish that cannot swim upstream past the dam to spawn.

The siting of the Schuylerville facility made perfect sense, Elmer said, because it follows the natural terrain of the Fish Hook ­— a slight decline is perfect — and the Fish Hook continues after the water’s power is harnessed.

The Schuylerville plant has a 1.7-megawatt capacity and is small, relatively speaking, but it generates 7,000 megawatt hours of juice a year while an average home uses about 1,500 kilowatt hours (1/1000th of a megawatt hour) of electricity per year. The facility at the Hoover Dam — which took five years to construct and opened in 1936 — has a 2,000-megawatt capacity. That generates 4.5 billion kilowatt hours of electricity a year, or enough to meet the electrical needs of eight million people in Arizona, Southern California and Nevada, according to the Arizona Power Authority.

MEGA was initiated in 1998 and formally established three years later

to “achieve the most competitive prices for electricity and natural gas for its members.” It is a Local Development Corporation, currently serving more than 30 county governments and 250 municipalities including some school districts.

Basically, the price of energy, electric and natural gas, are set every day in the marketplace. For electricity, the New York Independent System Operator runs an auction 24 hours a day, seven days a week to determine pricing across the state. For natural gas, pricing is set on the New York Mercantile Exchange.

According to the MEGA website, utilities and suppliers add transmission and other costs into the price of each commodity. By bidding on behalf of a collective group of consumers, MEGA reduces the price of those extras and saves its members money.

The   traded Canadian company specializing in renewable energy owns and operates 218 hydroelectric facilities on 218 rivers in North and South America — the most of any company in the world.

Sixty-one percent of that company is owned by Toronto-based Brookfield Asset Management, a massive company that has $365 billion in assets and does business in more than 30 countries. In addition to renewable energy, it is involved in real estate, infrastructure and private equity.

“This partnership came together because of Brookfield’s approach to innovation and new types of relationships and Gravity had experience in New York,” Elphik said of similar deals brokered with Putnam County, Vassar College and Skidmore College.

The Colorado-based company currently has more than 60 megawatts of hydroelectric projects operating or under development across the country. MEGA picked Gravity to help facilitate partnerships with municipalities which, like Colonie, enter into long term deals.

Having a 20-year paying customer, that is all but guaranteed to still be paying for the duration of two decades, plays well to banks when it comes time to bond for maintenance at the facilities.

Many of them are, like Schuylerville,  100-plus years old, and while the housing and main components are probably good for another 100, the inner workings do need a makeover every 20 or so years.