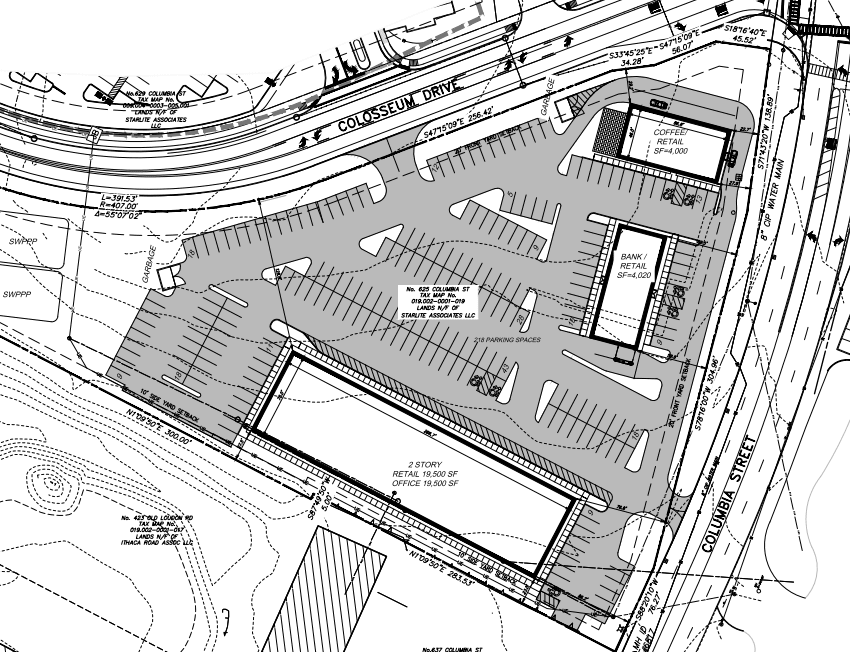 The location of the three buildings proposed for the former Starlite Theater site in Colonie.

COLONIE — The Galesi Group introduced Phase II of its plans to re-develop the old Starlite Theater site to the Planning Board on Tuesday, May 28.

The Schenectady-based developers are proposing three new buildings at the site off Route 9: a 4,020-square-foot bank/retail building, a 4,000-square-foot coffee shop/retail building, and a two-story building with a 19,500-squre-foot footprint that will house offices on the second floor and retail and a daycare on the first floor.

The two smaller buildings would have a drive through, the larger building would have a playground in the back and there will be parking for a total of 218 vehicles.

The 6.1-acre chunk of land is along Columbia Street Extension, and the proposed buildings would be just west of the intersection with the newly constructed road called Colosseum Drive, which bifurcates the nearly 60-acre site where Galesi is building a 150,000-square-foot headquarters for Ayco, a financial management company under the wealthy Goldman Sach’s umbrella.

The presentation by engineers Hershberg and Hershberg was a sketch plan review, a way to introduce the project to the Planning Board, so no formal action was taken. It was introduced as a stand-alone project rather than as part of the Ayco building or as part of future plans for the rest of the site.

A number of questions, though, were brought up by the Town Designated Engineer, Clough Harbor Associates, and discussed by the Planning Board.

Heather Wyld, of CHA, after a preliminary review, said she would like to see the buildings located closer to Columbia Street and eliminate parking and drive aisles on the street side and would like to see that space landscaped rather than blacktopped.

She also said the state Department of Transportation would need to approve a curb cut onto Columbia Street and the proposed curb cut should be shifted west to possibly share it with the adjoining property, Latham Ford.

She added Tuesday night was the first she heard of a daycare center as a potential use and that may change her analysis on parking, site access and site plan.

A developer can build in a conservation overlay district but a percentage has to remain open space, which is different than landscaped greenspace. According to the narrative submitted to the Planning Board, buildings would take up 9.9 percent of the 6.1 acres, pavements and sidewalks would take up 35.1 percent while 55 percent would remain “green area.”

Paul Fillati, of the Galesi Group, said the presentation Tuesday was just a first blush and that he knows more work is needed before it comes back to the board for concept acceptance.

Last summer, Galesi broke ground on the $56 million Ayco building that will allow the company to consolidate three offices in Latham. The company will retain some 600 well-paying jobs in Albany County with the potential to add some 120 more.

Part of the deal is the construction of the road that will run from Columbia Street to further north on Route 9 that will, in theory, alleviate some traffic at the intersection of Columbia Street, Route 9 and the Northway.

The Starlite Theater was a popular 300-seat performance venue that opened in 1958 and closed in 1998. It was torn down in 2012 and the land has remained stagnant since.