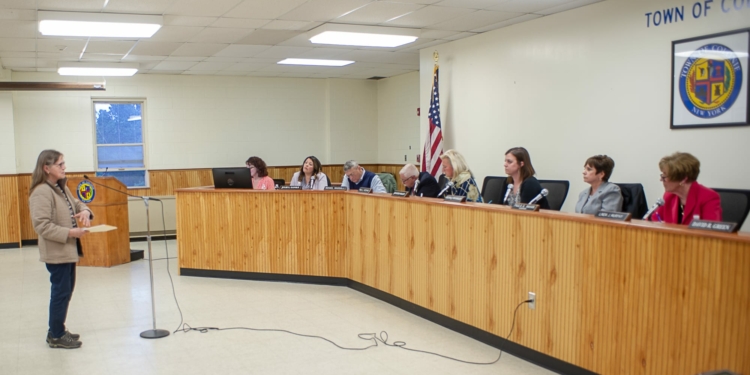 The Town Board hears from a resident during a public hearing on the Comprehensive Plan on Thursday, May 9. Jim Franco / Spotlight News

COLONIE — The fourth public hearing on the proposed Comprehensive Plan that is three years in the works was largely a rehash of the first three.

A handful of people spoke on the plan, which will update the existing 2005 Comprehensive Plan, and the hot topics were again preservation of open space, traffic, development and the process the town has followed over the past three years.

In particular, the manner in which public comment was gathered and disseminated came under fire. Some members of the public felt all comments should be available to the public but the chair of the Planning and Economic Development Department, Joe LaCavita, said he aggregates the comments, filters some of them out depending on the comment and if it is repetitive, and then hands them off to the Town Board.

Also, the survey done for the town by Siena Research Institute was criticized for not including the villages of Colonie or Menands although they are located within the town boundaries.

Town Attorney Mike Magguilli said state law prevents the town from imposing zoning restrictions within a village boundary and that in 2017, Menands began work on its own Comprehensive Plan.

Jessica Mahar, a member of the Comprehensive Plan Advisory Committee, said she never saw the direct comments that came through the web portal set up to keep residents informed of the committee’s progress and said there were a number of weeks, or perhaps months, where the portal was not working.

She said now that CPAC has handed over the Comprehensive Plan to the Town Board, there should be some plan included to address how the public participates at different town meetings. And, she said, that process should be the same for all meetings.

“It is different for every meeting and when people show up at meetings they don’t know what the process is,” she said. “I think it would be great to have a consistent process for the public to patriciate in government at all town meetings. It would create a sense of order and continuity and I think it would calm down the atmosphere especially when they are dealing with controversial projects at the Planning Board and the Zoning Board of Appeals.”

She recommended the process, in whatever form, be published on the town website and on the back of the agendas so people know what to expect and how to participate.

Magguilli said the rules were printed on the back of the agendas at one time but the town was criticized for being too restrictive so now they are tacked to the bulletin board outside the Town Clerk’s office in Town Hall.

She also said the town is making a mistake by not identifying privately owned land that is open space because it could limit the chance of getting state or federal help in purchasing the land for conservation purposes.

Gloria Knorr, a longtime Colonie landowner and regular speaker at Town Board and Planning Board meetings said the town does “not need saving.”

“I’m tired of hearing people complaining and trying to save Colonie. Damn tired,” she said to the half dozen critics from Save Colonie, a Partnership for Planning. “Do they care about veterans or are they are worried about trees. We have to decide what is important.

The board adjourned the public hearing to a later, not yet determined date.

It is not clear when the board will adopt the plan that will act as a guide for any formal and binding changes in land use law and/or zoning regulations.

LETTER to the EDITOR: Kaplan Family is grateful