As American Legion turns 100, focus is on membership 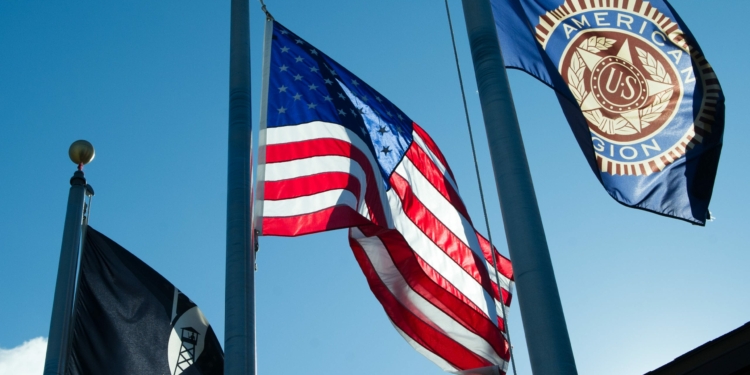 COLONIE — The American Legion was created by an act of Congress in 1919 with the purpose of providing service to veterans, service members and communities.

Since members of the American Expeditionary Force convened in Paris for the first American Legion caucus 100 years ago on March 15 through 17, times have certainly changed.

The Legion’s focus, though has not.

“They will help anybody at any time. Their hearts are with the veterans and the active service members and the families because when a son or daughter joins, the entire family joins.  They really go above and beyond not only for us, the blue star moms, but everybody,” said Donna Vickery, president of the Blue Star Moms of America, Chapter 2 prior to the group’s monthly meeting at the American Legion Joseph E. Zaloga Post on Everett Road.

While there are some two million American Legion members across the country, making it the largest veterans organization in the U.S., numbers across the board are down. To help rectify that, said Zaloga Membership Chairman Harvey Martel, the organization is asking Congress to open up stringent enrollment regulations to maybe convince more members to join.

As it stands now, only veterans who served at least one day between designated times and dates are allowed to formally join the Legion (see chart.) Martel and other Legion officials

would like to see that changed to include anyone who was deployed by the federal government for at least one day and who was honorably discharged.

“Would we get a bunch of new members out of it? Probably not,” Martel said. “But, we might get a few and, more importantly, it’s the right thing to do.”

In the mid 1990s to the early 2000s the Zaloga Post had more than 1000 members. Now it has about 680 with the goal of getting 708 by the end of June. The reasons for the drop are varied, with the main two being WWII and Korean veterans getting older and dying, and the tendency to isolate among the new batch of vets who served in Iraq and Afghanistan.

Plus, those younger vets are busy doing other things, like supporting a family, instead of investing time at American Legion posts.

“When I was in my mid-40s I was raising a family and maybe working two jobs sometimes and I was too busy to get to active too and some of them think that when they join they have to attend every meeting and every function and that’s just not the case,” Martel said. “They have their own organizations going too, and I don’t understand why that is. We are all in the same business and that is to help vets. All vets. Not just vets of certain wars.”

Those vets could be losing out, Martel said, because the American Legion has been around the longest, and is the most well established and has a nearly infinite source of help it can either give vets directly or direct them to organizations who can help. It has assisted with everything from health care, housing, Post Traumatic Stress Disorder, addiction and, perhaps most importantly, just by being there so someone can go and relax with likeminded people.

And some could say the market is saturated — the Zaloga

Post is one of 17 American Legions posts in Albany County. Many of those, though, are many who are just “paper posts,” without a building and who want to hold onto their charter for simply sentimental reasons.

Not so with the Zaloga Post, who just paid off its mortgage this year and who host all sorts of community events and teams, holiday parties, dinners and a whole host of veteran-centric groups use their post to hold their regular meetings, like the Blue Star Mothers.

In other words, despite the perception by some in the public, an American Legion post is more than just a private bar where people can hang out.

“If any vet needs help this is a good starting point. We are active and we are tied into all sorts of sources and resources for veterans. We can’t solve all the problems but we can point them in the right direction. We can let them know what kind of help is out there,” said Martel. “And we offer camaraderie. We are more than just a bunch of guys sitting at a bar.”

And while veterans is the main focus, the post does branch out into the community. It sponsors trips to Boys State for qualified candidates and it sponsors an annual oratorical contest where high schoolers have to study the Constitution and then give an eight-minute oral dissertation on just one part of it.

And right now the Zaloga post is helping the Blue Star Mothers collect items for the boxes they send over to those serving in Iraq and Afghanistan.

Vickery, who has a child serving overseas, said one reason those just coming back are reluctant to sign up is because anyone’s initial reaction is to ignore what they experienced.

“I think when our kids come back it is hard for them to get back into society. They see so much, they just want to forget so they run from it,” she said. “But, after a little bit, they realize they need the American Legion. It’s a brotherhood and a sisterhood. It’s like having a buddy in a fox hole. They have your back. And you can some here and sit next to a person who will understand what you are going through. That’s what the American Legion is all about.”

Larry Schilling said what it means to be a member is often misunderstood and said just not enough people are giving the post a chance.

“If we can get people in here just for a little while. To see what we do and how we do it I think they will sign up,” he said. “Not everyone has to be here every day or be at every function. But if everyone does a little bit we can continue to function and we will continue to help the vets and the community.”

The McDonald’s in Glenmont Plaza may get a makeover