After three years of work, Colonie Town Board gets Comp Plan 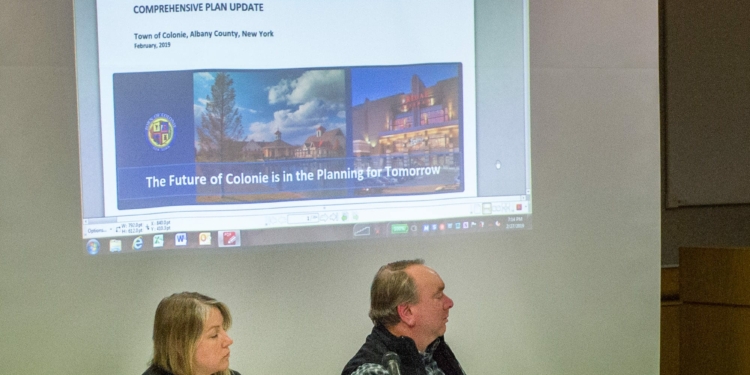 Chuck Voss, of Barton & Loguidice, during the last meeting of the Comprehensive Plan committee on Wednesday, Feb 27 Photos by Jim Franco / Spotlight News

COLONIE — Master Plan: “Materials, written and/or graphic, including but not limited to maps, charts, studies, resolutions, reports and other descriptive material that identify the goals, objectives, principles, guidelines, policies, standards, devices and instruments for the immediate and long-range protection, enhancement, growth and development of a municipality.”

Nearly three years of work updating the 2005 Comprehensive Plan has wrapped up and handed off to the Town board for consideration. A public hearing is slated for March 21 and residents can make comments prior to the meeting. Based on public input, or lack thereof, the board could adopt the plan at that time, or decide it needs tweaking and adopt it at a later date.

The plan is, by and large, a collection of recommendations on how the town will evolve over the next decade or so. It touches on about everything from parks and recreation to open space to how and what can be developed where.

But, the plan is just an advisory document. For any part of it to carry any regulatory teeth the Town Board will have to amend or adopt land use and other laws that are on the books like it did in 2007 based on the 2005 Comprehensive Plan.

“The committee is making its recommendation tonight and the rest is in the Town Board’s hands, they control the land use law,” said Joe LaCivita, chair of the Planning and Economic Development Department. “The Comprehensive Plan is the vision. The binding document behind this is the land use law, which is based on the Comp Plan.

He said the Town Board has already made some changes to the land use law in the way of incentive fees for developers who want more density than current zoning allows, and by creating an overlay district for the re-development of the Tobin meat packing plant on Everett Road. The latter

straddles Albany and Colonie and the two municipalities, in unprecedented fashion, created a joint Planning Board to shepherd the project through the process.

“A Comprehensive Plan provides you with guidance and recommendations as you move forward,” said Supervisor Paula Mahan. “We are so big, and there is a lot going on at the same time so it will certainly help to have a plan to guide us, and the public, so we know where we are headed.”

The plan, put together by the engineering firm of Barton and Loguidice, is broad by design and the goals and objectives laid out in the 69-page draft plan — which does not include the three appendices — released on Wednesday, Feb. 27.

The goals and objectives are prioritized with some seen as being more critical than others. For example, “protecting the town’s natural resources such as stream corridors, steep slopes, floodplains, wetlands and unique ecosystems” was given a high priority. “Ensure an efficient and fair development approval process that is predictable, transparent and protective of the town’s environment and residential character of its neighborhoods,” was given a medium priority. And “maintaining the town’s high level of public safety services” was given a low priority.

Traffic and development, two top concerns most regularly voiced by the populace, were addressed in the study. “Improving mobility in the town” was given a high priority and should be addressed within three years.

About two-thirds, 66 percent, leave Colonie to work somewhere else and 91 percent rely on a personal vehicle to get back and forth. Three percent work from home, 2 percent walk to work, 2 percent take the bus and less than 1 percent ride a bike.

Prior to World War II, the majority of land in Colonie was used for agriculture while today only 1.1 percent, or 651.7 acres, are used for such activity and that is mostly for greenhouses and vacant land associated with farming operations.

“There is a lot of information but for people who are not involved in the planning and zoning it is really hard to understand,” said a member of SAVE Colonie, a Partnership for Planning. “Most documents like this have an executive summary but there isn’t one here and some of the maps do not have any supporting information, and not based on the latest information.”

Much of the information used by Chuck Voss, an engineer with Barton and Loguidice who spearheaded the project, is based on the most recent official data, the 2010 U.S. Census. But, a lot has changed in Colonie over the last decade and without more up to date data, the information is flawed and, by extension, so are the recommendations.

According to the draft report, the town’s population will increase slowly through 2040 when it tops out at 86,549. By 2050 it will drop slightly.

The majority of town, 55.6 percent or 17,697 acres, is zoned single family residential.

Susan Laurilliard, a member of SAVE, said it would be nice if the town published comments made on the website prior to the March 21 meeting in real time so people could get a better handle on the plan prior to March 21.

Three members of the Albany Bike Coalition came to the meeting to encourage town officials to first learn about and understand the concept of Compete Streets — where streets are designed to accommodate people using all different modes of transportation like bikes, buses and cars.

To the victor go the spoil, though, and anyone beating Mahan would have earned the right to implement his or her own vision for Colonie. So, after three years, what is to stop that from happening and this plan being relegated to the bottom drawer of a spare desk in the Planning Department.

One of the things you saw with the supervisor coming in 2008 is we inherited the 2005 comp plan and the land use law, LaCitiva said. “Where we thought needed changing, we changed, it but we never blew up the whole plan. You have to have something to go by as you move forward and every once in a while it is recommended you update that plan and that is what we are doing here. We are not re-inventing the wheel.”

LETTER to the EDITOR: I respectfully disagree