DISCOVER LATHAM & BOGHT: Ayco developing on the long-vacant lot of land once the site of The Starlite Theater 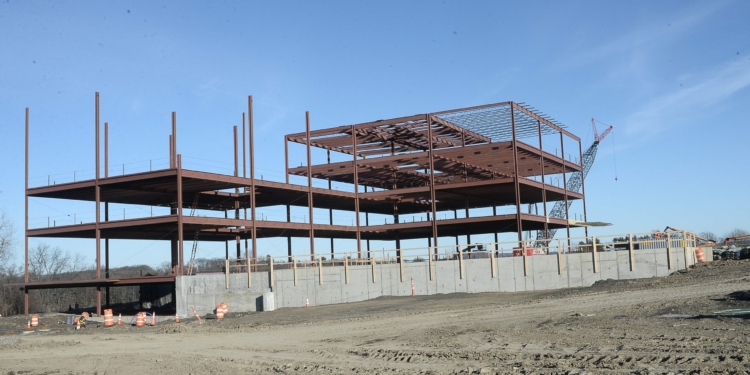 COLONIE — Nobody likes giving tax incentives to corporations, especially when the corporation falls under the umbrella of Goldman Sach’s, a synonym for affluence that’s spanned generations.

But, such is the reality of economic development. If a municipality doesn’t offer incentives, any company or developer in the business of making a profit will just go where the pot is a bit sweeter. While there was some understandable push back, albeit minor, when the Colonie Industrial Development Agency gave the Galesi Group, the company building a 150,000-square-foot headquarters for Ayco on the Starlite Theater site a $12 million package, it wasn’t done without just cause.

Prior to granting the incentives, the IDA commissioned Camoin Associates, a Saratoga based economic development consulting firm, to perform an in depth study on the impacts the Ayco headquarters, and the some 800 employees who will call it home, will have on the Boght Road area and the town as a whole The Starlite Theater, a 3,000-seat performance venue, opened in 1958 with a production of Damn Yankees, that sits on nearly 60 acres off Route 9. It’s last “show” was the 1998 Shaker High School graduation and it was torn down in 2012. The land has remained vacant since, and while a number of proposals were introduced, some formally and some not so much, they all fell by the wayside.

“In my mind it is a competitive nature. There were 29 sites Ayco was looking at and we were fortunate enough to get chosen,” Joe LaCivita, the IDA executive director who also serves as head of the town’s Planning and Economic Development Department, said previously. “And if it is so easy and desirable to develop why has it been vacant since

“I am proud Ayco chose Colonie for its new

headquarters. Ayco’s decision means that at least 600 good jobs will stay right here in Colonie.  Plus, there is a potential for 160 more.  Remember, these are the jobs everyone wants — highly paid, high-skills jobs that support the local economy in countless ways,” she said. “Also, the connector road between Route 9R and Route 9 being built in connection with the project helps realize one of the town’s long-time goals — helping to alleviate traffic issues in that sector. That’s another big plus for Colonie.”

In October, 2017 ,the Galesi Group, one of the Capital District’s largest developers, said it wanted to build a 150,000-square-foot headquarters for Ayco on the site. The price tag is about $56 million, according to the Business Review. And, the company said it would construct the long awaited road between Route 9 and Route 9R that will not only serve as access the new building but also alleviate traffic congestion at the busy intersection of Columbia Street/9R and Route 9.

It wasn’t until the company got the necessary approvals from the Planning Board, though, that it went before the town’s IDA to solidify some $12 million in benefits.

Saratoga had also wanted Ayco and in 2016 the City Council had talked about building a new deck on the parking garage at Congress Park Center to accommodate the employees. There are about 225 Ayco employee working in the Saratoga office and instead of Colonie, the rest would have consolidated to the north.

In April, the IDA made public the results of the Camoin Associates study that looked at the financial benefits Ayco would bring to town.

Roughly, the incentives are:

• A 10-year Payment in Lieu of Taxes that starts with a total town, county and school tax bill of $106,509 in year one that gets progressively larger until maxing out at $1 million in year 10.

Based on a combination of those two formulas and the exemption, the town would not receive $126,360 if the project were taxed without incentives. Without the project, the amount of sales tax generated by construction materials would be zero.

The town would, according to Camoin, receive a nominal amount, about $3,000, in sales tax from construction workers spending money in Albany County businesses while working on the building.

The town would, too, collect some $53,893 a year in sales tax by the money spent in Albany County by employees working in the new building, according to the study.

“This property was sitting vacant for a very long period of time and national and local developers all competed for this project,” said Galesi President and CEO David Buicko, in a previous interview. “Every property we developed in the Capital Region, and anywhere in state or out of state, have utilized a variety of tax incentives and they are the only way to level playing field. But for getting the IDA benefits this project would not work. The numbers in this report add up big time as far as the economic impact to the community.”

Galesi also applied for a $5 million grant from the state to build the road bifurcating the site but it was turned down. The $6.5 million road will now be funded through mitigation fees assessed any project within the Boght Road-Columbia Street Generic Environmental Impact Statement.

Based on a formula dictated by the GEIS, the town is responsible for paying $338,000 out of the general fund for the road, Galesi would have to pay $998,000 out of pocket. The balance would come from mitigation fees other developers have paid and will pay in the future to cover the impacts of their respective projects on transportation within the Boght Road GEIS. Right now, there is some $2.8 million in the fund waiting to get spent on traffic improvements within the GEIS.

“We look at what the project is providing the municipality. Is it a good project and what does it bring to the town,” said IDA President John Kearney prior to granting the incentive package. “With Afrims they are extending water and sewer so public infrastructure improvements is one thing we can look at. Ayco is building a road connector to help alleviate traffic.

“Ayco is a long time employer in the Town of Colonie and in the region and our focus is to continue that and to look at the bigger picture,” Ayco Executive Vice President Kathryn Matthews told the Colonie IDA. “We are projecting to bring 160 new jobs by 2021 and we are confident we can meet those job projections and we will report back to the IDA to say we met those job projections. But, our lease commitment is contingent on making sure we have the financial assistance of the IDA to move the project forward.”

In addition to Latham and Saratoga the company also has offices in the City of Albany. Once construction is complete, sometime in 2019, all three office will consolidate in the new headquarters.

The some 800 financial sector jobs will equal $72.8 million a year with total sales — the amount of product or services the company will sell — coming in at $147.7 million a year, according to the analysis by  Camoin Associates.

The new annual direct earnings associated with the project is nearly $17.7 million a year onsite plus $55.1 million from retained jobs and $27 million in indirect earnings.

The study also found Ayco’s construction and ongoing existence at the site would create or retain some 475 indirect jobs such as maintenance and/or construction workers and workers at businesses supporting Ayco employees around the site.

“The one thing I heard the loudest was 900 parking spots — I sell cars,” said Alan Goldstein, of the Goldstein Auto Group, during a meeting of the IDA. “Based on this presentation on the economic impact, it really is a ‘no-brainer.’ It is just going to make so much activity and I think the presentation of the economic numbers is conservative.”