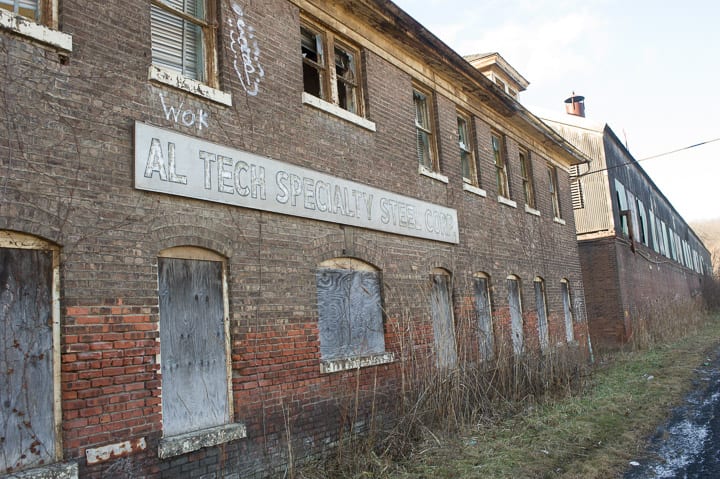 The outside of Al Tech along Spring Street. Jim Franco / Spotlight News

COLONIE — The state is looking to spend $16.6 million to clean up PCB, lead, chromium and other contaminates at the 100-plus-acre Al Tech Specialty Steel site on Spring Street.

The former steel plant, vacant since 2002, is listed as a Class 2 on the state registry of Inactive Hazardous Waste Sites and as such represents a “significant threat to public health or the environment” so “action is required,” according to the state Department of Environmental Conservation.

Also, the plan includes the excavation and on-site stabilization of 4,100 cubic yards of soil along the banks of the Kroma Kill, a small creek that runs through the site. And another 6,190 cubic yards of Kroma Kill sediments.

The site is owned by the Florida-based real estate company RealCo, according to the DEC, but Al Tech was the “owner during disposal.” While RealCo, Al Tech and other companies did contribute to a fund for cleanup, that money was spent on remedial cleanup and on finding how bad the contamination actually is. As such, there are no other responsible parties expected to contribute any money towards the cause and the state will pick up the entire $16.6 million.

The site was used for manufacturing steel from 1908 and for nearly a century a host of chemicals were used during that process.

What is left are a haphazard collection of huge buildings, much of which are too considered hazardous waste, and contaminated earth. Just along the Korma Kill, the DEC expects to dig 10-foot deep. The creek is tributary to the Hudson River just a mile away.

The 31-acre WMA is “occupied by a 12-acre industrial waste landfill.” There is an unnamed small stream that runs through the WMA and into the Korma Kill.

The majority of the remaining land is wooded or is old parking lots and there is also a leachate storage building and other outbuildings.

“Potential polluting activities from the manufacture of stainless steel include disposal of coal ash from early furnaces, storage and distribution of fuel oil, storage and use of various acids for pickling of steel products such as transformers and capacitors on site, and generation of chromium-containing electric arc furnace dust,” according to the DEC. “To a lesser extent, paints, thinners, solvents, lubricants and other chemicals were used in the facility support activities such as equipment and vehicle maintenance as well as general facility maintenance.”

While the acreage is surrounded by a chain link fence, there are clear signs that people have been either living at, playing around or simply exploring the site. There is graffiti seen from the road and there are large holes and/or gaps in the fencing. Also, there is more than one photo gallery posted online featuring garbage, machinery and other items left in the buildings when they stopped serving their intended purpose.

The plant was started by the Corning family when they moved Ludlum Steel to the area from New Jersey. In the 1930s the company merged with Pittsburgh’s Allegheny Steel and in the 1970s it became known as Al Tech. It produced a host of materials and parts for the auto, medical and aeronautical industries.

During its heyday, when WWII was raging, the company offered well-paying jobs to some 5,000 people. By 1993, there were about 600 employees and the workforce continued to shrink until the doors were closed for good.

The DEC will accept public comment on the project through Feb. 2 and will hold a public meeting at the Watervliet Senior Center, located at 1501 Broadway, on Jan. 22 starting at 7 p.m.

Project documents are available for review at the Watervliet Public Library.

Anyone with project-related questions or comments can contact Ruth Curley, of the DEC, at 518-402-9480 or [email protected].