Colonie wins a round in landfill legal battle 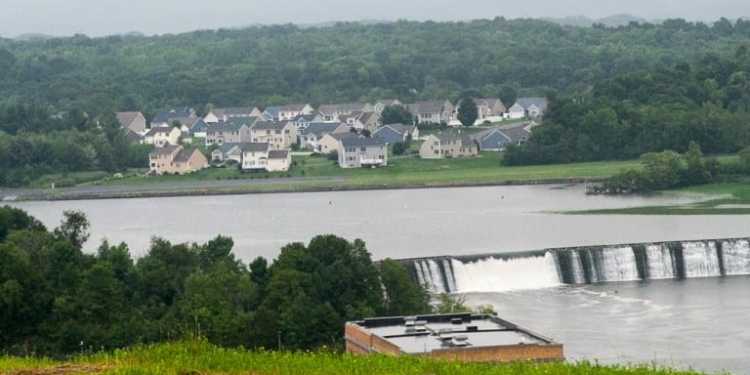 A neighborhood in Waterford on other side of the Mohawk River as seen from the top of the Colonie Landfill. Jim Franco / Spotlight News

ALBANY ­— Colonie won round one of a lawsuit looking to stop expansion of the landfill.

Acting state Supreme Court Judge Debora Young, after hearing oral arguments, ruled from the bench on Wednesday, Nov. 28, and denied a motion to stop expansion work at the landfill off Route 9.

“That would have been a temporary stop if they succeeded but it was denied outright in the courtroom,” said Colonie Senior Attorney John Spath. “The nature of a preliminary injunction is looking for something to stop and there are certain elements you have to prove and it is pretty high bar.”

The lawsuit brought by the towns of Waterford and Halfmoon to stop the expansion is still pending but Wednesday’s ruling just means that construction of a new cell in Latham can continue while the legalities are battled out in Albany.

In April, after nearly four years of deliberation, public comment and modifications, the state Department of Environmental Conservation gave Colonie permission to expand the landfill located between Route 9 and the Mohawk River by about 93 acres.

Known as Area 7, cells will be at least 500 feet from the river instead of 400 feet as initially proposed, and the expansion upward will reach 467 feet above sea level, 50 feet lower than the town wanted. About 23 acres will be new ground while the remaining acreage will be vertically, over the top of Areas 1 through 6.

Also, the DEC is requiring a third party be onsite to monitor all activities at the landfill. Waste Connections, the company who is under contract with the town to operate the landfill, will pay for the monitor.

Without the expansion, the 212-acre, 50-year-old landfill would have been filled to the DEC-permitted capacity by the end of this year. The additional acreage will keep it open until at least 2038.

Kubricky Construction, of Latham, is currently building Phase 1, a seven-acre “hole” to the south of the transfer station — to the right up the hill from Route 9 — and will have a life of about two and a half years, said Matt McGarry, an engineer for the town who oversees the landfill, and then the next 12- to 15-acre cell will be constructed.

Despite accounts to the contrary, McGarry said 90 percent of the waste brought to the landfill is from municipalities in four surrounding counties — Albany, Saratoga, Rensselaer and Schenectady — including Waterford and Halfmoon.

The expansion comes at a time when the City of Albany’s landfill on Rapp Road has limited the amount of trash it will take as it nears its permitted capacity, and part of DEC’s decision to allow the expansion is the area’s need to dispose of

trash in an economically feasible manner.

The amount of daily trash will not increase — up to 820 tons per day based on a 25-day average and not to exceed 255,840 ton per year  — but will allow it to continue existing operations for a longer period of time. To put it into perspective, the tonnage per year equals about the weight of 12,790 Toyota Tacoma pickup trucks.

There is up to eight million cubic yards of trash buried there now — which equals about 3.2 million pickup trucks full of garbage.

Basically, the lawsuit, filed in May, claims the DEC failed to take into account the seriousness of the threat presented by piling more garbage on top of the unlined sections of the landfill and the threat that poses to the nearby Mohawk River.

Residents of those two towns — and residents in Colonie too — have long complained about odors emanating from the landfill.

It is unclear when Young will rule on the merits of Waterford and Halfmoon’s lawsuit. Spath said all the paperwork has been filed, and the judge may or may not want to hear oral arguments. A decision on whether or not to nullify the DEC permit could come as soon as early next year, Spath said.