DISCOVER LOUDONVILLE: Four years after it was torn down, Hoffman’s Playland is still a Loudonville icon 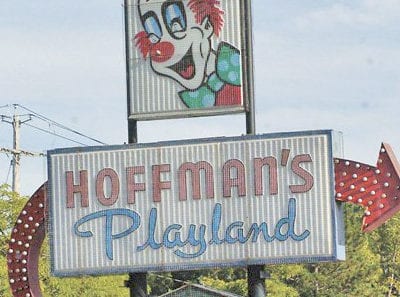 LOUDONVILLE — As excavators continue to develop the land that once boasted adjacent attractions to Hoffman’s Playland, they find golf balls in the dirt; a memory of what was once a thriving family business of fun and family in the heart of the Capital District.

It’s been approximately 1,460 days since a family entered Hoffman’s Playland and rode the train or took a spin on the carousel. Dave and Ruth Hoffman, the namesake and owners of the land, closed the park in 2014, after the season ended. The 8.14 acre lot was sold to 608 Loudon Road, LLC in 2013, according to Colonie town records. The land has lain barren since the final day, with the rides and attractions acquired by Albany’s Huck Finn’s Warehouse and More — the new park recently completed a fourth season.

“We have so enjoyed keeping the memories alive and making new ones,” a Facebook comment from Huck Finn reads. “[We have hundreds] of families share pictures with us of them as kids and now with their kids. [It’s] hard to believe it’s been here for four seasons already.”

Hoffman’s had a way of bringing people from around the area to one location; one promising fun, affordability and family time. Huck Finn’s aptly renamed the playland under its umbrella, however the memories of heading up Route 9 to see the iconic clown sign is not lost upon the town.

“I’m happy I get to bring my grandson to the new location,” Huttner said in the comment.

Laura Amato used to work at Hoffman’s. As a high school and college student, she and a few of her friends decided to get summer jobs as ride operators. Amato worked the majority of the time on the carousel or the train.

“It was a really awesome summer job to have,” Amato, now a resident of New York City, said of her employment at the family-owned business. “If it was too hot, we didn’t work. If it was raining, we didn’t work.

“I remember a couple times in the beginning of the year where there was such a low turnout,” she continued.

“I would just lie down on the benches in the train station and hang out for my shift. We all basically hung out all day because so few people were there.”

Amato regarded the Hoffmans as “some of the sweetest people around” and as “incredible bosses,” adding they were very involved with the park and were there all the time. She recalled during sweltering summer days, when the park had reached almost maximum capacity, navigating the train through the station under Dave’s watchful eye.

“You had to park the train so the back wasn’t too far out of the train station, and the front wasn’t in the crosswalk,” she said. “I’d look up and see Dave standing where he could see me park, and he’d watch me for hours.”

Amato’s fondest memory is of the friends, and eventually husband, she met while working at the theme park.

“We would get burnt on the train engine, get super tan while working,” she remembered. “My proudest talent still is being able to jump off a moving carousel without getting hurt. If I aimed my foot for the gum stain on the ground, I’d land every single time.

“It was an amazing summer job,” she concluded.

There have been no plans submitted for development of the parcel, Colonie spokeswoman Sara Wiest said, adding while casual discussions between potential developers and town officials have happened, no company has formally introduced a plan to the planning board. Wiest continued the town does hope to see the land developed.

“That section of the Route 9 corridor, where the driving range was and where [the] Hoffmans decided to sell the playland, it’s a big piece of property and we have been picky about what goes there because we want it to look nice,” Colonie Town Supervisor Paula Mahan said. “What we are hoping for, when that is developed, we want it to follow the pattern that is there now —the same look and style and the walkability concept … So far what is there is very beautiful.”

The contract with Schuyler Companies expired. The land is still owned on paper by 608 Loudon Road, LLC. The ownership of the land is still under the control of the Hoffman family, Mahan said. Schuyler president Eric Larner said he is willing to pursue development in the future.

“Unfortunately, at the time there was just some things that needed to be straightened out in order for us to move forward with our proposed development,” Larner explained. “We love the Hoffman’s property and would be passionate about its development.”

According to an article from the Albany Business Review, Malta-based company Burke Companies entered into contract for the land in early 2017, but as of November 2018, the parcel hasn’t changed hands. The company is known for its ownership of several Dunkin’ Donuts franchises in the area. Plans for the parcel under Burke Cos.’ control is unclear.

“We are looking at any and all possible configurations,” Burke Cos. CEO Tom Burke said at the time.

Mahan confirmed Burke Companies and Schuyler Companies have considered developing the parcel in the past.

The Village at New Loudon

In 2005, New Loudon Associates, LLC purchased the playland’s adjacent land, where the mini golf course, ice cream stand and driving range stood, for $5 million. The land was purchased from another member of the Hoffman family, Bob.

“We sat down and had a meeting with Mr. Hoffman about what he would like to see for the land in the future,” Anthony Fazzone, managing member of New Loudon Associates, LLC, said. “He wrote down what his objectives were and we wrote down ours.”

Within a half hour, Fazzone said the men had come to an agreement. Hoffman was shocked when the developers said they wanted to keep the location the same for awhile, at least until they could adequately pay the tax and interest on the sale. In all, New Loudon Associates, LLC put $1 million into the property before they began constructing the current occupants, The Village at New Loudon.

“We wanted to show we cared about the land and what was going to happen,” Fazzone explained. He was once a frequent visitor of the playland and its neighbor with his children. “The improvements drew people in, which ended up giving us more money to pay against the taxes and interest, which meant we could actually build something great and not get bogged down.”

The Village at New Loudon now sits proudly at the very center of the Capital District area, a pulsing heart of retail, pedestrians and cars. Traffic is heavy, but it means people are coming, regardless of the new location of the playland.

“The land around the former playland has been developed responsibly and looks great,” Fazzone said. “There might be some traffic, but it means we have created a place where people want to shop, eat and meet.”

Behind The Village at New Loudon, Marini Homes is developing apartments and retail centers. Bob Marini, owner and namesake of the business, said the development was a long time coming.

“It takes awhile to get stuff approved,” Marini said. “The Hoffmans agreed that development was best for the property. The parcels now there could not be supported originally.”

Marini was also a fan of the theme park and attractions. He used to take golf lessons, and he used the driving range and miniature golf course frequently.

“It’s such an attractive property,” Marini continued. “People want to go there.”

Marini added he is almost done with development.

“I don’t have much land to build on now,” he said. “I have the 57 apartment buildings and one office building.”

Across the street from the Marini development and the Village, the land that once housed A Frame Pools is looking at rejuvenation. Owned by JK Loudon, Wiest said town records show Advance Engineering and Land Surveying, PLLC, owned by Nicholas Costa, submitted a plan in May 2016 for a 5,050 sq. ft. restaurant, an attached 3,150 sq. ft drive-thru, and a retail center the same size as the restaurant.

In May 2018, Costa went in front of the planning board again and received renewed concept approval. The plans have been sent to the town for final approval, Eric Johnson, developer of Stonecorp Development and the developer of the project, said.

Johnson added he does not foresee any setbacks to the upcoming development.

The speed at which the project is fully completed will depend on how long it takes for the retail spaces to rent out. The restaurant will be built first. Johnson continued A Frame Pools has “absolutely not” gone out of business; the company will be moving into the retail center and will boast a smaller store than the stand-alone store it once had.

As the land around it grows and prospers, the last piece — the actual playland parcel —sits quietly. Time has passed, but the memories of the one-time summer destination still float in the air. The area is almost unrecognizable from what it once was.

“It’s a developer’s dream to see it prosper and thrive as it has,” Fazzone said. “There’s enough to do for everyone. It looks amazing.”