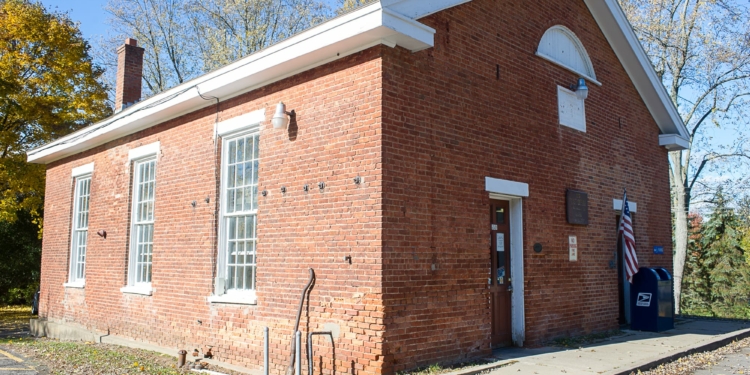 COLONIE — The little brick U.S. Post Office on Route 9 still closes at noontime so the lone clerk can take a lunch.

The building is owned and maintained by the town and is rented to the U.S. Postal Service for $1,451 a month. It is listed on the National Register of Historic Places, and walking through the door is like stepping back in time. Even in the building’s latest use, it still has the old fashioned post office boxes with the combination locks rather than the newer models secured with a key.

The clerk of the last five years, Holly Sullivan, had to help one new customer out with working the locks of one of the boxes that line the narrow hallway separating the public area from where she conducts postal business.

“I’ve worked in a lot of offices, in fact I’ve worked in smaller offices over the years, and back in the olden days, when the streets weren’t as nice as now, it made since for every town to have its own post office,” she said. “I’m amazed it’s actually still open. People ask all the time when it’s going to close but we are controlled by Congress and when they tied to close a lot of offices like this, ones that do not make money, Congress said ‘no, you can’t do that.’”

But, said Maureen Marion, a spokeswoman for the USPS, geographic location is just one factor that goes into determining where a post office branch is located.

“Typically, there are smaller post offices that have historic significance with a small ‘h’ and by that I mean Washington didn’t mail letters there but that they have been part of a community for a

number of years,” she said. “They were, and in some cases still are, strategically located along busy roadways or where there is foot traffic so to have these smaller post offices and have other post offices nearby is not uncommon.”

The building at 534 Loudon Road, or the “old road from Albany to Saratoga” does has a storied history. It was built in 1852 on the land of John Newton who with his family settled there in around 1840. He built a house and a general store and then a Baptist Church.

The inscription above the post office door, which is obscured by decades of Northeast weather and was at one time cemented over, reads, “First Baptist Church, Newtonville, Organized 1849, erected 1852. Builders – J.H. Lockrow , I Waterman.”

President Chester A. Arthur’s father lived in Newtonville from 1855 to 1863 and was a preacher at the church during those years, according to a 1972 application to the U.S. Department of the Interior, a division of the National Parks Service requesting the building be added to the National Registry of Historic Places. He and his family lived in a house down the road at what is now 574 Loudon Road. It was built in about 1846 and where Arthur Sr. ran a private boys school out of the home.

“During the latter half of the 19th century the use of the building as a church was discontinued, and it was adapted to use as a school, bus garage, farm machinery sales office and for the past thirty years a post office,” according to the document provided by Colonie Historian Kevin Franklin.

“Originally, the simple church of a newly organized and short-lived congregation, the Newtonville Post Office has withstood many tests of time with remarkable architectural integrity,” according to the 1972 document. “One hundred years ago it was the center of an isolated rural community and today it is considered a little grace note in a heavily suburbanized setting.”

Inside, there is nothing left of the original church and the exterior has been modified over the years. For example, there were large overhead doors on two sides cut into the brick when it was a machinery shop and the wood shingles covered in metal was replaced with red cedar shingles and have since been replaced with asphalt.

A concrete facing has been poured over the original fieldstone and the concrete slab on grade is covered with wood. Some of the original brick has been patched with plaster.

building and surroundings are showing its age — the Newtonville Post Office is a busy place, and does offer the same services as the larger outlets.

“When [Siena] college is in session, and if you come here at Christmas time there will be a line out the door,” Sullivan said. “Everything they take over the counter at the large office I can do here, right across the board. Your boxes up to 70 pounds, all the different services, your priorities, your express your global internationals.”

DISCOVER LOUDONVILLE: Four years after it was torn down, Hoffman’s Playland is still a Loudonville icon

DISCOVER LOUDONVILLE: A Loudonville native placed the blame of Lincoln’s death upon his shoulders, and paid dearly for it