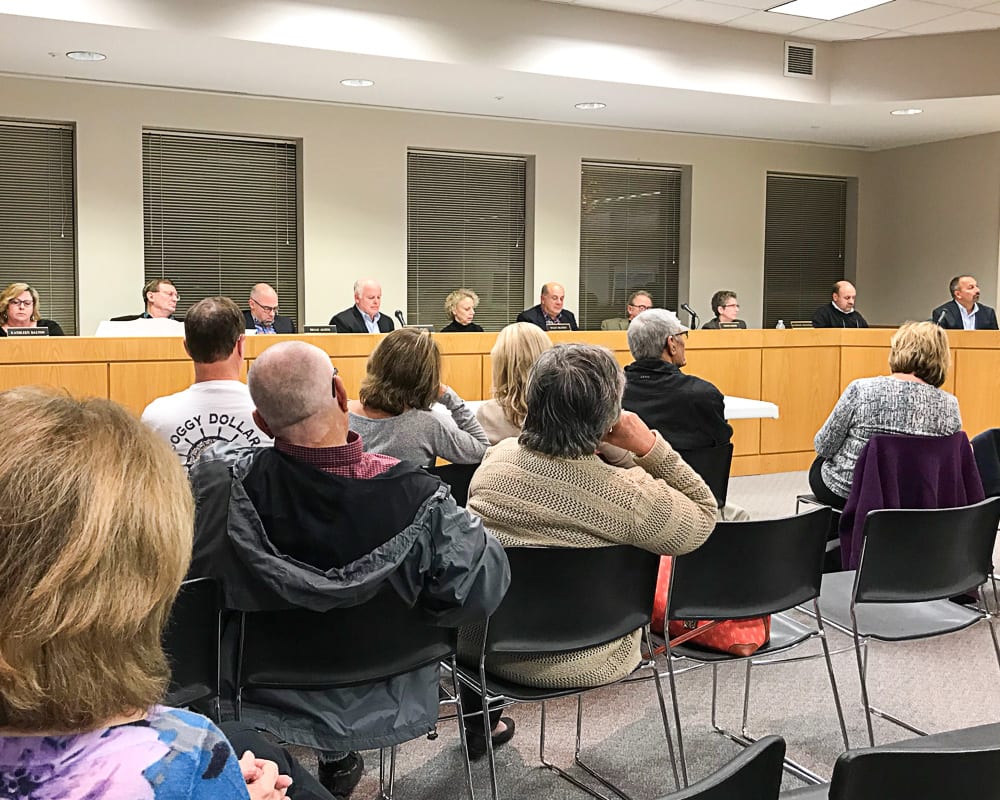 The Planning Board on Tuesday, Oct. 16. Jim Franco / Spotlight News

COLONIE — The town Planning Board unanimously approved the Summit at Forts Ferry, a 62-unit, three-story apartment building for seniors and a 30,000-square-foot, two-story office building on Tuesday, Oct. 16.

This is the latest iteration of the project that has been through a number of changes since first introduced in March 2017. Developing the 13-plus-acre, largely wooded lot near the intersection of Forts Ferry and Wade roads has been discussed since at least 2006, and has come under intense public scrutiny.

Now that the final approval has been granted, Adam DeSantis, who was at the marathon meeting on behalf of developer Frank Nigro, said construction could start this season and he expects 10 months to one-year until the doors are open. A builder has not yet been decided upon.

“It took a little longer than we expected but we think it is a great project and we are excited to get going,” he said.

The land is tucked between the commercial industries like Target, large hotels and a medical arts building, and the quiet, quaint residential neighborhoods of Omega Terrace, Catalina Drive and Harrogate Way. It is zoned Office Residential, and that zoning allows the construction of up to a 235,000-square-foot office building.

In March, 2017, Nigro wanted to change the zoning to a Planned Development District and build a 110-unit apartment building for seniors. That was nixed. In October of that year he scaled it down to a 47,000-square-foot, three-story office building and an 87,000-square-foot, three-story apartment building. That is within the parameters of existing zoning, but it too met with staunch opposition from the neighbors.

Two months later, he presented three possible construction scenarios and settled on the proposal that was approved during a four-hour-plus marathon Planning Board meeting that also saw four other projects.

“This is in the top percentile of project that we have reviewed in terms of thoroughness,” said Planning Board Chairman Peter Stuto prior to the vote. “The density is significantly less than it could have been if they built to its maximum size and they do own the property and they are entitled to develop it. It is their legal right. I think we have done our best with the board and with the input and interaction with the neighbors.”

There was one waiver required, increasing the maximum allowable setback from 20 feet to 150 feet from the front of the building to Forts Ferry Road which was requested by the board and neighbors.

There were some minor changes to the project from July, the last time it was before the board during a special “board update” that was initiated for this project.

The entrance on Forts Ferry Road was moved 30-feet to avoid headlights shining into a resident’s home across the road by exiting vehicles. And the road circling the perimeter was moved slightly to not disrupt an archeologically significant site known as Weatherwax Farm, and the road will now not have any breaks so emergency vehicles can travers the entire site in one loop should the need arise.

After the changes, the percentage of open space shrunk from 65 percent to 62 percent, or still about 8.5 acres. Twenty-four percent of the site will be paved, mostly for the 227 parking spots, and the two main buildings and five garages, with room for another 47 parking spaces, will take up about 10 percent of the total site.

Neighbors again voiced concern about storm water runoff, traffic, the buffer between the project and their back yards and the fact the board voted on a project that will have such a significant impact on their lives at about 11:15 p.m. after meeting for more than four hours.

“This has been going on for multiple years and you can see how exhausted they are. They didn’t have to approve it tonight. They could have tabled it, gone back to bed and come back in a couple weeks and then made a decision,” said Vice President of the West Latham Neighborhood Association John Drake, who has lived on Catalina Drive for 25 years.

He said he requested a number of documents under the state Freedom of Information Law and had only received them a day before the meeting, said the developer blew off a promised meeting with the neighborhood and said the fact the town will not recognize a previously agreed upon up to 300-foot buffer instead of the current 100-foot makes him skeptical.

“I’m disappointed because of what we did until now. This is part of my lack of trust I have in the town and the developer,” he said.

The association did retain an attorney early on in the process but Drake said he doesn’t foresee any other recourse.

There is anecdotal evidence dating to 2006, like newspaper articles, claiming the town changed the buffer between the neighborhoods surrounding the land from the standard 100 feet to between 200 and 300 feet. The town, though, could find no hard evidence, like meeting transcripts, of a formal local law ever passing to establish the larger buffer, the developer won the lawsuit and the 100-foot buffer remains.

Mike Tucker, an engineer with VHB, said the company hired a landscape architect to determine if new trees should be planted along the existing buffer to help shield neighbors from the development but it was determined it would do more harm than good.

“Maybe it is something to look at in the future but we didn’t want to hurt existing trees to put more trees in,” he said.

Stormwater, which is currently a long-standing problem for the neighborhoods, was also discussed at length. Paul Dzialo, the town’s Stormwater Management Program coordinator said the runoff would not get any worse under the revised plan, which would capture the water at five different locations on the new development site and direct the rest away from the adjoining neighborhoods.

It is projected that between 84 and 85 people older than 55 will live in the apartment building and between 100 and 150 will work in the office building.

One resident asked how the town can assure only seniors will live in the building and asked for a deed restriction.

Mary Beth Slevin, an attorney for Nigro, said there are other Summit developments and they all cater to seniors as far as how the site is built and the programs offered. There are no deed restrictions, but renting to just seniors is a condition of site plan approval.

Data provided previously by Wendy Holsberger, a traffic engineer with Creighton Manning, said at most there will be an additional 59 more cars during the morning rush hour and 63 during peak afternoon time. Not enough to warrant modification of the existing road and/or traffic light configuration.

Whiskey, brauts and music should bring the masses to Voorheesville gun club to help raise funds for youth music

GUILDERLAND LIBRARY: Join us for a Jazz concert Sunday