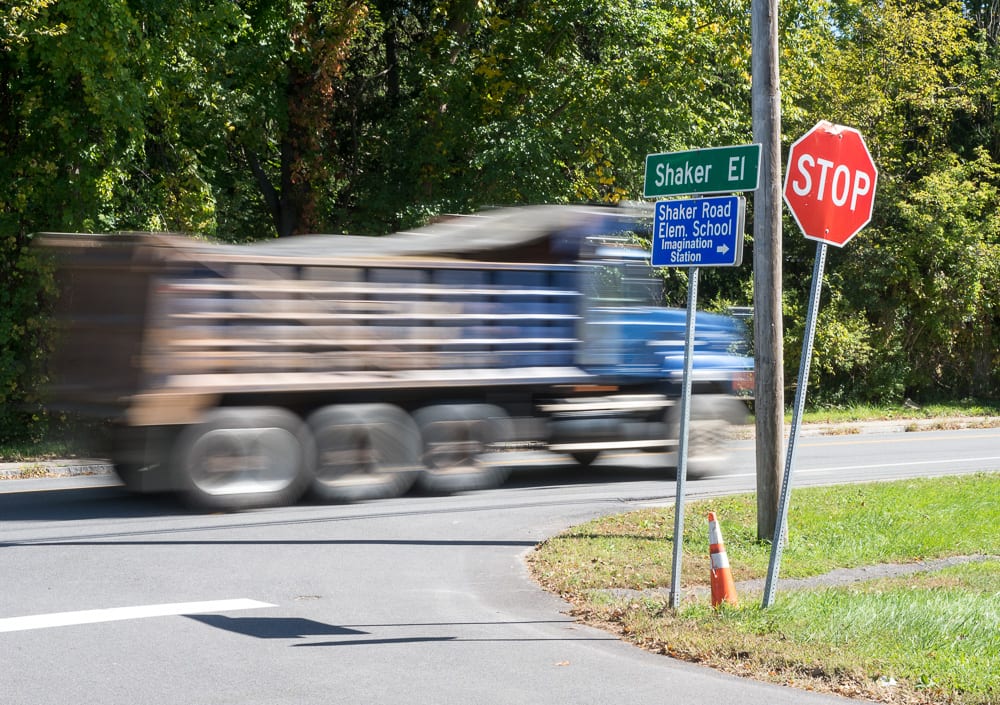 A truck speeds down Albany Shaker Road at the intersection of Shaker El. Photo by Jim Franco / Spotlight News

COLONIE — A group of parents with students at Shaker Elementary School have started a petition drive in an effort to convince the powers that be to do something about the intersection of Shaker El and Albany Shaker Road.

The petition, which had surpassed its goal of 1,000 signatures as of early Monday, Oct. 8, says the traffic issues at the intersection have long been neglected and is recommending officials with the town and county install a flashing school speed limit signs and/or a traffic light on a timer and an enhancement to the crosswalk. Those who signed are also supporting reducing the 40 mph speed limit on the busy thoroughfare.

Getting a line of buses full of children out of Shaker El onto Albany Shaker is a disaster waiting to happen and traffic can get backed up for blocks when one is trying to take a left into Shaker El.

“The scariest part is not the cars but the buses. They make me more nervous because they can’t step on it to get through like a car. It’s terrifying watching a bus make a left hand turn onto Shaker El,” said Mary DeAngelo, the parent of a student at Shaker El and one of the organizers of the petition drive. “We met with [County Executive] Dan McCoy and [Town Supervisor] Paula Mahan and they want to do something but it’s a matter of funding. In the meantime we need 1,000 signatures on a petition so if there is an issue of getting funding we can show the community is supporting this initiative.”

After two parents —Rosa Azadian and Christy Field — spoke out at a recent meeting to discuss an in-depth study of the corridor, the crosswalk was re-painted so the long neglected concerns about the intersection were at least acknowledged.

But, without other modifications, the crosswalk does little to make the intersection safer for children trying to traverse Albany Shaker Road and is little more than innocuous paint on the road.

“When I first moved to the area I didn’t even know there was an elementary school there,” DeAngelo said. “There is a tiny blue sign that’s hard to see and on ‘Walk to School Day’ you fear for your life.”

The town has not assigned a crossing guard to the intersection and DeAngelo said last fall a police officer donated her time on “Walk to School Day” to help students cross Albany Shaker in the morning but wasn’t there in the afternoon “and it was scary.”

Gina Fusco said she doesn’t allow her children to participate in the Walk to School Day, which is generally, at other elementary schools, a way to promote healthy lifestyles and environmental conservation.

“We have lived in the district for two years and it’s been an issue since we moved here,” she said. “I don’t know if it’s a priority for the town or the county. It’s been this way for years but I don’t know if any changes have been seriously considered of if anyone has pursued it as we are.”

The Albany County-owned road has been a major thoroughfare since Colonie was mostly farmland and would use it to transport crops to the City of Albany. Today, it sees come 16,000 vehicles with an estimated 40 percent using it as a cut through to avoid congestion on the Northway and I-90.

“Discussions regarding traffic flow near the elementary school on Albany Shaker Road are ongoing with the Town of Colonie and I look forward to continuing to work together on this important project,” said Albany County Executive Daniel P. McCoy in a statement.

A months-long study conducted by Creighton Manning sponsored by the county, the town and the Capital District Transportation Committee did identify the Shaker El intersection as one that does need work. It also identified, generally, the cost of such work — crosswalks complete with signs and curb cuts could run up to $30,000 and a traffic light in sync with pedestrian crossing lights and would run another $300,000.

“I don’t think they think it’s a priority. There are teachers who say they have been wanting something done there for 20 years or more,” said Sharon Fowles, who has four children attending the school. “The community always knew about it but I think the traffic study may have started to push things to the forefront.”

Albany County Legislator Paul Burgdorf, who represents the Albany Shaker Road area, said he hopes the town and the county can “evaluate all the intersection improvements which will be in the final report and then work towards funding them.”

To sign the petition, visit change.org and search for the Shaker Road Elementary Traffic Study or click here.

People take to the Rail Trail to enjoy the fall foliage, and it’s good for local business