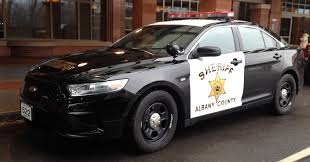 COLONIE – An off-duty deputy with the Albany County Sheriff’s Office shot a dog that attacked his K9 at around 7 p.m. on Thursday, Aug. 16.

According to Sheriff Craig Apple, Deputy Joseph Martel was working out with K9 Moe and another privately owned dog on Prince Court in Colonie.

The group was “attacked” by an unregistered pit bull-type dog named Caesar, who is owned by Nicholas Signore. K9 Moe was injured. The third dog, a Labrador, was not injured.

Martel used his licensed, off-duty firearm “in defense of his K9 partner,” Apple said in a statement, and Caesar was hit.

Caesar was transported to the Capital District Veterinary Referral Hospital by Colonie police for treatment. The dog is alive but is unconscious with extensive brain trauma.

Sheriff’s K9 Mo was transported by Martel to Upstate Veterinary Specialties where he received three stitches to this left ear and a puncture wound to his left paw.

The investigation is ongoing and the Sheriff’s Office is being assisted by Colonie Police Department and Town of Colonie animal control.