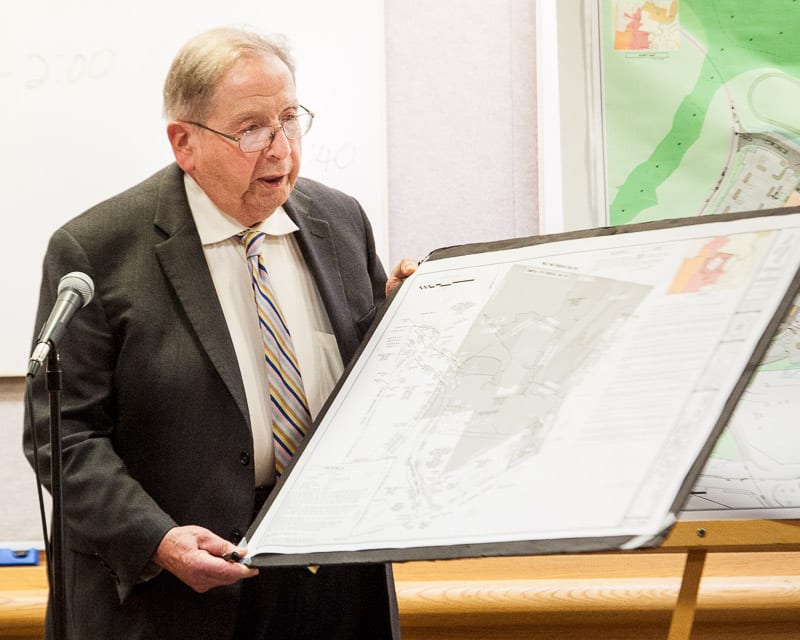 COLONIE – The Planning Board, by unanimous decision, approved the 150,000-sqaure-foot headquarters for Ayco at the former Starlite Theater site on Tuesday, July 10.

Just two people spoke at the public hearing portion of the meeting, and both were against the plan. One person cited an unmanageable increase in traffic at the already congested intersection of Route 9 and 9R and another said the project is too big for the space.

But the project has been on the table for nearly a year — making its first appearance before the Planning Board in August, 2017 and then again in October, 2017 and in April and June — so any opposition had already been heard and, where deemed appropriate, addressed.

A day later, the Industrial Development Agency approve the requested incentive package and Buicko expects to break ground as soon as possible, and most definitely during this construction season. Construction will take between 16 and 18 months to complete and LaChase Construction is the general contractor.

The $5 million connector road would basically bifurcate the site and run from Old Loudon Road to Columbia Street, or from Route 9 to Route 9R. Galesi asked the state for funding but was denied. While the company will now front the money to build the road, which will then be turned over to the town, it will eventually get paid for with mitigation fees as outlined in the Boght Road Generic Environmental Impact Statement.

Mitigation fees are assessed development projects located within GEIS areas based on projected impacts on a host of town services and/or things like traffic. Since the value of the road is above and beyond what Galesi would have had to pay in mitigation fees, it could use the credits towards fees when it develops Phase II and/or Phase III of the 58-acre parcel, or it could get  portion of mitigation fees paid by other developers who build within the GEIS.

The road, though, is seen as critical to any future development in the area.

“This project will not only be required to pay its fair share for the impacts on traffic operations in the area but it will also take on construction of the connector road, which is a $5 million infrastructure improvement, necessary to accommodate

development not only on this site but development in the Boght Road GEIS over the next 15 to 20 years,” said Joe Grasso, the town’s designated engineer on the project. “The cost of the connector road is four or five times of the fair share mitigation fees, but it is something that will allow it to go forward.”

The project for the site that has sat vacant since the Starlite Theater was demolished in 1998, did draw criticism from the public while it worked its way through the approval process.

“To me, at the first meeting this was presented, it seemed apparent it was a done deal. Everyone on the board seemed to be in favor of it when it was initially presented,” said Barbara Numrich, who lives on Loudon Road. “When the Comprehensive Plan was presented to the town, two issues became very apparent — the townspeople were concerned about traffic and development. Unfortunately the Comprehensive Plan has fallen flat and is not going anywhere but traffic and development remain a very big issue for the town and this is a very big project and it seems too big for the area.”

Planning Board Chairman Peter Stuto interrupted, saying it’s not really up to the Planning Board to determine what goes where. Rather, the board determines if a project meets zoning parameters.

“It is not our decision whether this type of project belongs here, it is a permitted use in the zone that exists,” Stuto said.

A Payment in Lieu of Taxes proposal is a 10-year deal starting with a total town, county and school tax bill of $106,509 in year one that gets progressively larger until maxing out at $1 million in year 10. The company would pay more than $6.5 million over the 10-year period including $4.8 million to the North Colonie School District, just more than $1 million to the county and $685,719 to the town.

Without the project or the PILOT, the site as is would generate a total of $304,230, according to an economic impact study commissioned by the IDA.

There are also exemptions from sales and mortgage taxes which would have no direct financial impact to the town since it does not get any of those types of taxes without construction of a building. Also, Ayco received for some sales tax breaks on the fit-up costs.

There were some critics who took issue with offering a multi-billion company any financial incentives but by and large the process was a smooth one.

Ayco is under the umbrella of Goldman Sachs, an iconic financial services company that’s been around since 1869. Ayco says the new headquarters in Colonie will allow it to retain 626 employees and allow it to hire 160 new people by 2021 in high-paying, financial sector jobs with another 476 indirect jobs – or jobs created with the ongoing existence of Ayco at the site.

Total earnings will equal $72.8 million a year with total sales — the amount of product or services the company will vend — coming in at $147.7 million a year.

A business of that magnitude, and the salaries it will pay, means it’s a win-win, Buicko said.

“The trickle-down effect is very real and we are seeing it right now with the $500 million project in Schenectady – Mohawk Harbor — where we are seeing the ancillary businesses increasing their business 25 to 30 percent,” Buicko said. “We develop all over the country, and I just came back from my son’s wedding in Seattle. I would love to see companies that will offer well-paying jobs and places for kids to grow and earn a decent living right here so they stay at home and companies like this can make that happen.”

The Richer Team: A local firm with national exposure