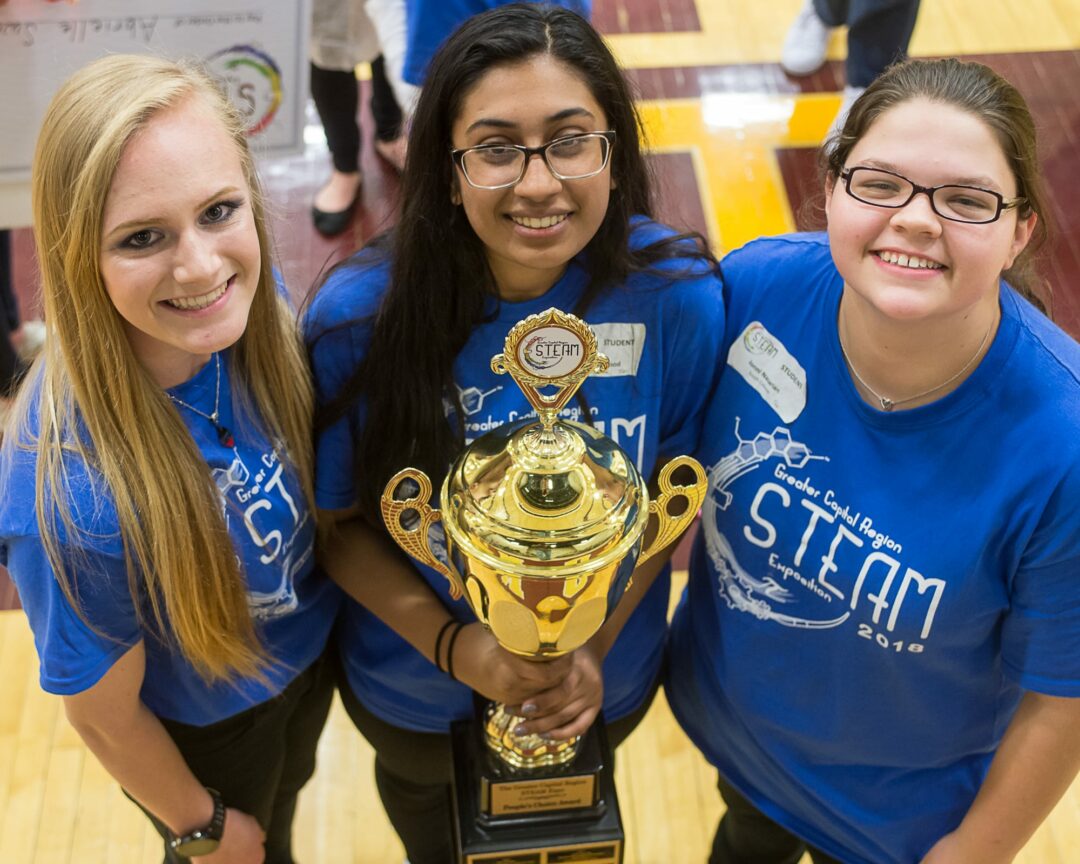 COLONIE — The rain may have dampened outside activities at the annual Raiderfest, but things were going hot and heavy inside the gym at the Greater Capital Region STEAM Exposition.

STEAM has been a part of Raiderfest for three years, and each year it’s gotten bigger with more prize money, said organizer Michelle Famoso, a Colonie High School physics teacher. This year, students from across the Capital District presented projects to judges and $2,000 was given away to students.

STEAM stands for Science, Technology, Engineering, Art and Mathematics. On Saturday, May 19, there were 21 projects presented by high school students from across the Capital District that incorporated all or some of the above disciplines and all of which had a degree of altruistic value.

Click here to check out a slideshow of Raiderfest and the STEAM Expo.

For example, this year’s grand prize winner of $650, Guilderland High School student Febronia Mansour, used different mutations that have been confirmed to have correlation to Alzheimer’s in humans and incorporated them into a large model of a microscopic worm.

“The idea is, if we can’t understand Alzheimer’s at the human level, chances are we will probably be able to understand it in a smaller scale and that in turn informs our understanding of it in humans,” she said. “We see these problems and we want to have great big, big breakthroughs but sometimes it takes going down to a simpler level to understand the problem or the situation in that smaller organism before we can understand it in a larger one.”

In addition to the students’ projects, there were also some 35 companies and exhibitors and a live animal show. Last year, when exposition was held at the front of the school due to renovations, there were 1,400 visitors. Famoso said she did not have an exact count this year, and wasn’t sure if it was because of the location or the rain driving everyone inside but the crowd was larger.

Three Colonie High School seniors won the People’s Choice Award, which is an impressive trophy given to the project that drew the most spectator votes.

“I took a biomed development course with Miss Famoso and she introduced us to STEAM,” said Hamia Mahmood, who wants to be a lawyer. “We went to the Langdon School, a school for students with disabilities, and we worked with them on performing daily tasks and our task was to help the with gardening.”

“One of the things we focused on was picking, and one of the problems they have is that they have low or high muscle tension and sometimes when they pick through fruit they either crush it or they don’t have the strength to pull back on it,” said Lindsey Podlaski, who wants to major in mechanical engineering. “So what we did was developed a device to help them pick fruit and at the end of it would be a DC motor that can be controlled button with the assistance of a teacher.”

“We wanted to focus on making the prototypes for all users even if they don’t have disabilities,” said Jonni Nazarian, who wants to be an obstetric surgeon. “For example, some people with arthritis need special tools or the elderly need special tools so we wanted to make it so everyone can use it and not just the disabled but our design does suit them well.”

As with anything in life, not everything went as smoothly as planned.

“This is my second version of my project, the first one was wireless power but that went up in white smoke last night so I had to improvise with the parts I had to have something cool to show off today,” said Max Lockett, a junior at Tech Valley High School from Berlin who was bridging the gap between two wires with a third wire to create a dancing flame.

He was, though, happy to be a part of the expo.

“It helps to showcase people’s work, and brings people into the field and it’s really just a good time for everyone,” he said.

Raiderfest is an annual community event at the Colonie High School campus hosted by ICARE, a student organization that is an acronym for Integrity, Community, Accountability, Respect and Empathy.

Despite, or to spite, the rain in addition to the STEAM Expo it still featured a variety of activities color run, carnival, food and craft vendors, chicken barbecue, laser tag, and a pet awareness workshop. iCARE uses the funds raised to support community groups.

To kick the day off the day, the South Colonie Central School District held a ceremony to honor police, EMS and other first responders at the Hill of Heroes outside the high school.

This year, State Police Trooper Michael Anson was honored during the ceremony. Anson, a Colonie high grad, served 31 years out of the Loudonville barracks. His assistance at the Twin Towers terrorist attacks on Sept. 11, 2001 eventually led to his death from lung cancer.

gathering: “You don’t have to be like my father to be a hero in this world. There are many things you can do to help people in your own community by simply following the values iCARE stands for … Integrity, Community, Accountability, Respect and Empathy.”

Following the ceremony, a new stone featuring two intertwined American flags was unveiled. And, iCARE donated the first brick paver in honor of Michael Anson for the new Pathway of Heroes.

The path will be unveiled at Raiderfest, 2019. To purchase a paver visit the district website at southcolonie.org or call the district office at 518-869-3576.

SPOTTED: Raiderfest and the STEAM Expo at Colonie High