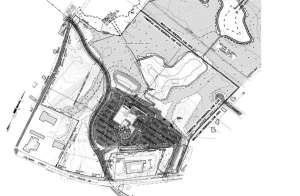 COLONIE — After not getting a $5 million grant from the state, the Galesi Group, which is shepherding Phase I of the project through the planning process, is looking for other ways to fund the $6.5 million connector road that is called critical to developing the former Starlite theater site.

The site is governed by the Boght Road-Columbia Street Generic Environmental Impact Statement that was first finalized in 1989 and since updated. According to that, the town is responsible for a public share of transportation improvement expenses of any project within the GEIS area — which is roughly bordered by the bike path to the north, the Northway to the west, Alternate Route 7/Troy Schenectady Road to the south and the Delaware and Hudson railroad and town line to the east.

Based on a formula dictated by the GEIS, town attorney Michael Maggulli said the town would be responsible for paying $338,000 out of the general fund for the road, Galesi would have to pay $998,000 out of pocket.

The balance would come from mitigation fees other developers have paid and will pay in the future to cover the impacts of their respective projects on transportation within the Boght Road GEIS.

Traffic mitigation fees are set by the Capital District Transportation Committee for any project approved by the town’s Planning Board. Right now the town has some $2.8 million in a fund from fees collected by developers of previous projects within the GEIS area, said town spokeswoman Sara Wiest.

That money would get paid to Galesi to help offset the cost of building the road, and any future traffic mitigation fees paid for by developers of future projects would get forwarded by the town to Galesi until the cost of the road is covered.

Mitigation fees come in all shapes. For example, developers within the Boght Road, Airport or Lisha Kill GEIS all pay a per-unit fee to mitigate the impact on such things as recreation, infrastructure and fire protection. Traffic mitigation based on the volume of vehicles a project will generate and is established by the Capital District Transportation Committee.

If Galesi successfully lobbies the state for a $5 million grant the town would still have to pay the $338,000 out of taxpayer money, but it would not have to forward the mitigation fee money.

That could then be used only to make traffic improvements in the Boght Road GEIS area.

FILM REVIEW: ‘Chappaquiddick’ delves into one of the murkiest Kennedy scandals in history