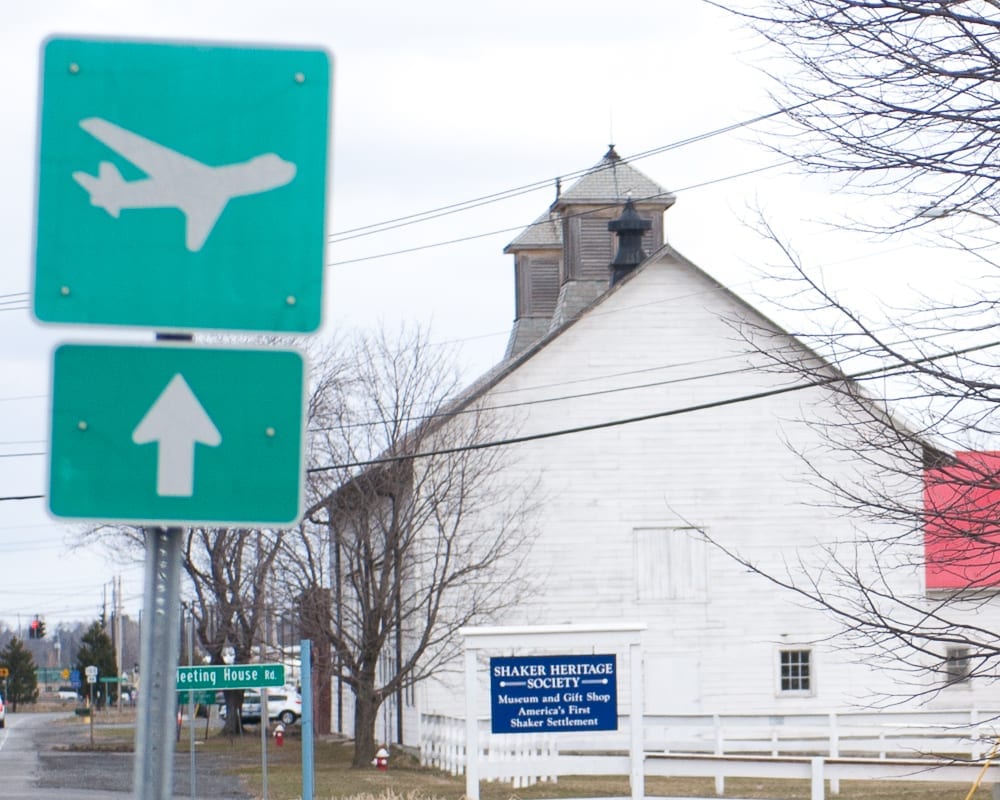 The entrance to the Shaker Historical Society with a sign pointing to the nearby airport. (Photo by Jim Franco/Spotlight News)

The Preservation League of New York State named the Watervliet Shaker National Register Historic District as one of its “Seven to Save” properties for 2018-19.

The society picks seven historic buildings and/or properties from across the state that, for whatever reason – or for a variety of reasons – run a higher than normal risk of demolition or re-development.

The seven chosen this year are in danger of “disappearing because of vacancy, disinvestment and lack of public awareness,” according to the league.

The Shaker site near the airport, is home to the first Shaker settlement in the U.S. It was founded by Ann Lee in the late 18th century and there are five buildings left standing.

“The site of the Watervliet-Shaker National Historic District is exceptionally susceptible to insensitive development: it is already bordered by the Albany International Airport and two major highways,” according to the Preservation League, a non-profit advocacy group. “The area is a natural gateway to regional attractions, especially shopping and lodging, parking lots, and other commercial features. Some of the important buildings within the Shaker district are vacant and deteriorating rapidly, while some others are in danger of being blocked by large encroaching development projects or demolished all together.”

The other six properties targeted by the Preservation League this year are the South End-Groesbeckville National Register Historic District in Albany, the Haglund Building in Chautauqua County, Wells Barns in Monroe and Livingston counties, the Enlarged Erie Canal Schoharie Aqueduct in Montgomery County, the Lehigh Valley Railroad Roundhouse and related structures in Ontario County and historic opera houses across the state.

More information on the Shaker site later in the week and in our next print edition.