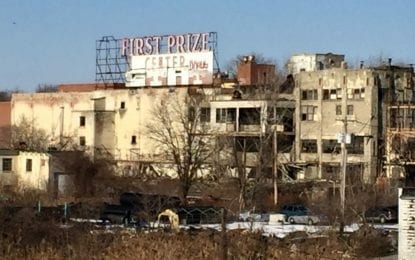 COLONIE – Two projects in town will receive a total of $1.7 million in Restore NY funds to demolish old, dilapidated buildings and clear the way for new construction.

The town will get for $1 million to demolish the Tobin’s First Prize plant on Exchange Street and the village will get $700,000 to demolish the town’s former recreation center on Central Avenue. That money will get passed onto the project’s developers.

In all, the state awarded $11 million to 10 Capital District municipalities in the Round 5 Restore NY grant cycle. Statewide, $81 million was awarded to 71 municipalities.

The 32-acre site that was home to Tobin’s has been eyeballed for a number of projects over the years but the cost to demolish the existing, massive buildings is one reason nothing has happened since the meat packing plant closed its doors in 1981.

The latest idea is the brainchild of Richbell Capital and includes a 152-square-foot mix of residential and commercial uses. To shepherd the project along, since the land straddles two municipalities, the Town of Colonie and the City of Albany created an overlay district that will include its own Planning Board with the sole purpose of addressing the project.

Bill Hoblock, the executive vice president of Richbell Capital, said the $1 million is a fantastic start to knocking down the buildings. But, he stressed, it’s just one piece of the puzzle.

“It does show a commitment by the state for the project. The Town of Colonie and the City of Albany have already demonstrated a commitment when they re-zoned the land and created an overlay district,” he said. “It’s a great example of a public/private partnership. We are willing and able to invest, but we do need some government help and that is the only way to get rid of eyesores like this.”

Richbell is expected to close on the deal to purchase the property in the next 90 days and a detailed demolition plan and schedule is currently being outlined, Hoblock said. It is possible a wrecking ball could swing by the end of the year.

Other ideas that have gone by the wayside for the logistically attractive site included a Walmart distribution center, a Cabella’s sporting goods store, a Whole Foods, a casino and a Lowes plaza.

In 2016, the town sold the recreation center, located at 1653 central Ave., to Goldstein Realty Holdings LLC for a reported $1.78 million.

The 37,510-square-foot building was initially the village school and

is “obsolete, and was built with old construction materials that contains asbestos and may contain lead based paint, along with inadequate electric service and plumbing and limited internet capabilities,” according to Benjamin Syden, a vice president of the Laberge Group. “There is little or no access externally or internally within the building for those with disabilities. As a result, it is not economically feasible to redevelop or renovate the structure.”

The Laberge Group who wrote the Restore NY grant request for the village and five other successful applicants in the Capital District.

Once the existing building is demolished, a 21,000-square-foot mixed use building will be constructed on the land and will include retail space and senior citizen housing.

“There are virtually no spaces left in the village for further commercial development,” Syden wrote. “Once the 37,510-square-foot building is demolished, and the new 21,000-square-foot mixed use building is constructed, the property will enhance tax rolls, which will stimulate the local business climate while generating a new source of tax revenue for the Village of Colonie, considered a moderately distressed community by New York state.”

Jamie Blot, the village clerk, said no plans for re-development have been submitted to the village Planning Board as of Wednesday, March 28.