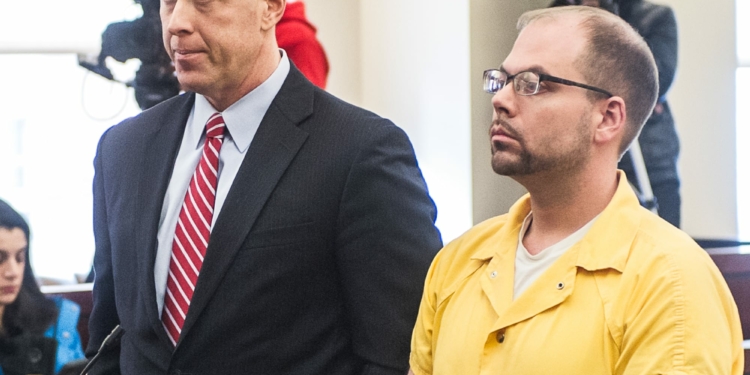 ALBANY – Brian Tromans, the man a jury convicted of hitting and killing Master Sgt. Rudolph Seabron on Jan. 8, 2017, will spend up to the next 11 years in prison.

Judge Roger McDonough could have ordered the 34-year-old to serve the two and a third to seven years in prison for leaving the scene of an accident, and the one and a third to four years for tampering with evidence, concurrently. But instead, with harsh words, said they will serve consecutively.

“What is clear and unequivocal to the court is Master Sgt. Rudolph Seabron was a man of courage and honor. He did not deserve to die alone on a road on a winter night,” McDonough said in court on Friday, Feb. 9. “In stark contract stands the defendant … despite Mr. Tromans’s expression of remorse here today, who has presented himself in his actions and his words as being concerned about one person — and that is Brian Tromans.

“Any expression he has in regards to Master Sgt. Seabron and his tragic death rings hollow in the courts ears.”

The judge tossed the most serious charge, criminal negligent homicide, which was brought by prosecutors late in the process, because there was not sufficient evidence.

Three of Seabron’s family members gave victim impact statements, and his son read a statement on behalf of his daughter. All spoke of a dedicated military man with nearly three decades of service and of a selfless role model and provider to his family.

“We both served in the military and he understood what I went through during my deployments. He taught me integrity, something of which you have none,” said Jason Caro, Seabron’s eldest boy, to Tromans. “I was always taught that if you get in trouble you pay the consequences. I hope they deny you parole because you don’t deserve a happy life. You took a life and therefore yours should be wiped away.”

Despite the family, the judge and the prosecutor saying Tromans was unapologetic and who would do anything to save his own skin, Tromans did apologize in court. But, he still maintained he did not know he hit a person.

“I come from a military family and I understand and honor that commitment, that sense of duty and that sacrifice they make,” he said. “Every single day I think about my actions, and the events that took place that night and what I could have done differently. It’s not something I take lightly. If I had known, I would have done anything in my power to have done something more if I had known. I did not know it was a person.

“I am sincerely sorry for what has happened.”

They family, though, wasn’t buying it and asked McDonough to give Tromans the maximum possible sentence.

“Rudy was a man who was willing to forgive people if they asked for it but your actions didn’t even deserve that. Your selfish actions failed to do that. You didn’t have the common decency to own up to what you did. You’re a coward,” said brother Jon Seabron. “Judge, I pray you use your power to sentence Brian to the maximum sentence allowed by law so our family, who suffered a tremendous loss, can heal.”

Seabron’s cousin, John O’Meally, a 12-year vet of the U.S. Navy, said the loss is greater than to just the family.

“I would like the court to consider the societal impact of Rudy’s death. Rudy was an honorable man. Rudy embodied the ideal of service to country, of service to mission, of service to team and of service to community and his fellow man,” he said. “I don’t know the defendant, but my guess is he has no experience serving anything outside his own self-interest.

“Who leaves a person dead after inflicting mortal harm upon them

only to run away to hide, deny, obfuscate and obstruct in an attempt to evade responsibility for their actions. Only somebody who is self-serving to a criminal fault, and that is the absolute opposite of who Rudy was.”

On Jan. 8, 2017 Seabron, who lives in Rome but was in the area for National Guard training, and Tromans were on their way home from the same bar, Philly Bar and Grill, at around 4 a.m.

Tromans struck and killed Seabron on Watervliet Shaker Road and then took his car to his father’s house in Melrose. He and his attorney, Lee Kindlon, maintain he did not know he hit a person but instead thought it was a deer.

The off-hand comment he made during trial, comparing Seabron to a reindeer because it was raining that night, was brought up by the judge and during the victim impact statements to demonstrate a profound lack of remorse.

Also, the judge mentioned the fact Tromans never told a friend, who was with him when they closed the bar, about the accident. And that Tromans told his father’s neighbor he damaged his car by hitting a deer in Wynantskill — the same story he told to a Colonie police investigator — rather than telling them he hit a deer on Watervliet Shaker Road as evidence he knew he hit a person.

Assistant District Attorney David Szalda, who prosecuted along with Bureau Chief Mary Tanner-Richter, said Tromans blamed everyone for the accident except himself.

“That is the man, who in the days following the crash, did everything he could do to hide what he did,” Szalda said in court. “The defendant showed no compassion for Rudolph Seabron on Jan. 8, therefore he deserves none now.”

Kindlon argued the basis for the tampering count is leaving the scene, and since the two crimes are essentially for the same action Truman should serve the sentences concurrently rather than consecutively. The judge denied that request.

Kindlon also attempted to soften the steady assault on his client’s character from Jan. 8, 2017 through and including Feb. 9, 2018.

“If Brian had known he hit a person he would have stopped his vehicle and called 911 but he just didn’t know,” Kindlon said, pointing out the number of letters sent on Troman’s behalf by family and friends. “Brian is not a monster. He is not the boogeyman this case has made him out to be. He is a good kid, from a good family. He has lived a life, he has served his community and he has tried to make the world a better place and I ask the court to take all that into consideration.”

Minutes later, McDonough sentenced Tromans to the maximum allowed under the law.