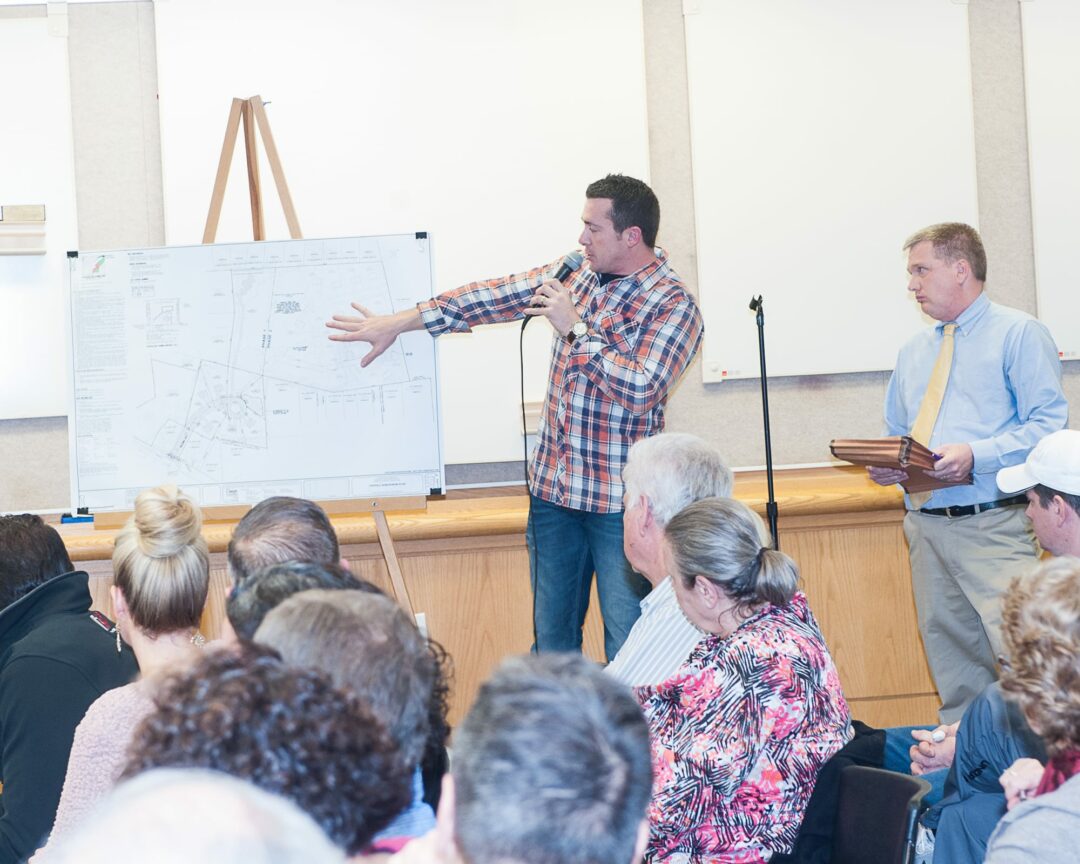 COLONIE – There was more time and concern spent on Phase II of a proposed housing project off of Boght Road than on Phase I – and Phase II wasn’t officially in front of the Planning Board.

At the end of a more than hour-long debate on Tuesday Jan. 23, the board unanimously gave concept acceptance to the construction of six single family homes, plus one lot for storm water management, on 17.9 acres off Boght Road.

It also strongly recommended the developer come back with plans to manage storm water and access for Phase II, an adjacent chunk of land which includes building 14 homes on 15 lots with one going for storm water management.

On paper, it is a straight-forward subdivision on land already zoned single family residential.

But, the project has a history.

In July 2017, an incarnation of the project would have built 15 homes in a neighborhood that would have been called Ridgeview Meadows. That project included a 56-bed memory care facility for seniors, that would have needed a variance because it the land is zoned single family residential, and an 80-bed assisted living facility.

While there is not a formal application in front of the town, the commercial component of Ridgeview Meadows, which would have access on Route 9, is expected to come back before the board at some point in the future.

The homebuilder of the latest Phase I and Phase II, Chris Marchand, of CGM Construction, told the standing room only crowd and the Planning Board, that while not officially affiliated with Ridgeview Meadows, the two projects are “tied at the hip.”

The reason is access. In the July presentation, the plan was to

connect the new residential neighborhood to the existing, high-end Dutch Meadows neighborhood by opening the Wetherby Court and Bergin Woods Drive cul-de-sacs — which they were designed to eventually do as the development was built out.

Neighbors of the development, though, showed up in force and the idea of connecting to the new development was yanked off the table.

Residents of the neighborhood showed up in force again on Tuesday.

Since, the idea of connecting to Dutch Meadows was scrapped, Marchand said, the development concept changed. Phase I, he said, is a short cul-de-sac off Bought Road to be called Welding Way. Access for Phase II, he said, is still up in the air but the most obvious option is to hook up with Ridgeview Meadows.

“There is no connection [to Dutch Meadows] anymore and we are not Ridgeview,” Marchand told the crowd and the Planning Board. “We are here for Phase I and only Phase I.”

The Planning Board did grant concept acceptance to Phase I with instructions for Marchand and his engineer, Roger Keating of Chazen Companies, to work on a plan for access and storm water drainage for Phase II.

“If we need to revise the plan for a different connection point we would do so. Regardless, we would have to come back before the board for Phase II,” Keating said.

Charles Voss, the town designated engineer for the project, said the current storm water management system, designed 20-something years ago with the development of Dutch Meadows, is simply not large enough to accommodate the storm water and that is why there is flooding.

“We are well aware of the culvert issue but at the time that was the standard,” he said. “Obviously, we are charged with dealing what is there now and the applicant has to mitigate the storm water as per DEC regulations and town regulations.”

The developer is not responsible for fixing existing storm water issues, Voss said, but added the development of Phase II is “an opportunity” to make what is there now better for all involved.

As far as the access issue is concerned, Voss said a new road could be built from the proposed Phase I cul-de-sac, Welding Way, to connect to a larger cul-de-sac for Phase II and the roads would loop back around to Boght Road.

A handful of residents spoke about the project and most were concerned with Phase II and stopping any access to Dutch Meadows, and/or the chance existing storm water issues getting worse.

“Our main concern with the proposed Phase I development is that it will dictate the outcome of how subsequent phases will be developed – that is how streets will be connected, how storm water is managed and how our neighborhood will be impacted,” said Chris Guzda, a resident of Bergen Woods. “Dutch meadow residents are adamantly against any street connections into our neighborhoods.”