A pauper’s grave: Nobody knows what to do with the unmarked cemetery near the Albany Airport (w/photo gallery) 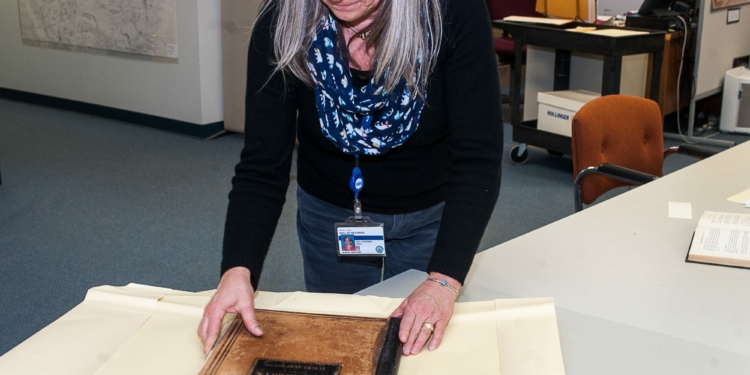 Jill Hughes, the Albany County archives clerk, at the Hall of Records, with a book of interments. (Photo by Jim Franco/Spotlight News)

COLONIE — The Albany County Airport Authority facility is bursting at the seams and has been looking for a place to expand.

The most logical spot is the adjacent 10-plus acres of land that currently houses the Albany County Hockey Facility. It’s owned by the county and the airport already uses a portion of the land to park cars for its valet parking service.

But, there is a little thing about what to do with what could be as many as 1,500 dead bodies buried in a paupers’ graveyard somewhere on the nearly 12 acres of land between the hockey rink, the jail, the airport, Ann Lee Home and Shaker Ridge Country Club.

It’s simply known by some as “The Hill.”

By and large, the bodies buried there had no friends or family while alive and the state – or Albany County – with no other options, buried them at the site from 1926 to about 1946.

In old ledgers kept “by the order of the coroners” at the Albany County Hall of Records on Tivoli Street, there is a list of people buried there. Some have names, and some have a cause of death – like “killed by D&H” or “killed by an auto” or “found in the river,” or “found in Menands” or simply “AMC,” an acronym for Albany Medical Center.

Others are just a numbered entry listed with a funeral home. And there is some evidence – anecdotal and otherwise – of bodies coming from other cemeteries and other potters’ fields as that land was developed or wanted for some use other than to house the dead for eternity.

There are no gravestones or markers visible on The Hill anymore, and there may not ever have been any since such symbols cost money and most, if not all, of those buried at the site were indigent. The fact is, nobody is 100 percent sure who is buried there, where the bodies are located or how many of them there are.

According to the “Journal of the Board of Supervisors of the County of Albany” on Aug. 9, 1926 Albany County bought the land from the United Society of Shakers.

“Resolved That all unclaimed bodies buried as provided by the state State Poor Law are in the future to be buried in the above-mentioned established cemetery,” according to the resolution that was unanimously approved by the 32-member body and sent to the county coroners and the supervisors of municipalities in Albany County.

“Nobody has found a map of the actual cemetery,” said Jill Hughes, the Albany County archives clerk at the Hall of Records. “We have had people come here who would like to know where their ancestors are. They will go to City Hall and get

their death certificate and it says they are buried in Ann Lee Pauper Cemetery in Colonie and they want to lay a wreath or pay some sort of respect. But nobody is sure exactly where they are so they walk around the back of the hockey rink because that’s all anyone knows.”

There is a crumbling brick building on top of The Hill that was, it is believed, used to keep caskets during the winter months while the ground was too frozen to dig a grave. Outside of that, there is no physical indication of The Hill being anything but a rolling pasture in what is one of the most developable, commercial areas of Albany County.

A standalone pauper’s graveyard is largely a thing of the past, said Albany County Coroner Tim Cavanaugh, and so are, thanks to technological advances in using dental records and DNA, unidentified bodies.

In fact, it’s only happened once in his 30-year career as a county coroner. About 15 years ago, a gypsy follower of the Grateful Dead, in town to see the shows at what is now the Times Union Center, and he got hit by a car on Rte. 787 and there was no clue who he was or where he came from.

“I hope it stays that way,” he said of it being a lone incident. “It’s always bothered me that we couldn’t find out who he was.”

He said the county Department of Social Services picked up the costs of embalming and the casket, and the man was buried at the Albany Rural Cemetery, which has a section dedicated to the indigent.

Now, that is the common procedure for not only the unidentified, but those who die without the means to pay, or family to pick up the cost, for any postmortem details.

It wasn’t always like that, said former Assemblyman Jack McEneny, a longtime county historian. The shift in Albany County happened under then Welfare Commissioner Francis Schreck in the 1960s, McEneny said, when he negotiated a deal with the cemeteries proper for them to set aside some earth for those who otherwise have no place else to rest their souls.

Every major cemetery in the county has a potters’ field, but prior to that and other regulations, it was common practice across Albany County and the U.S. to just pick an unwanted plot of land and bury people there.

And more than 1,000 bodies were moved when the city decided to expand Washington Park.

“My great grandmother’s mother was buried in the Catholic cemetery in Washington Park and she was moved up the street to Saint Mary’s where Albany High is now but they didn’t want that anymore so she is finally at rest in Saint Agnes,” McEneny said. “She saw more travel in death than she ever saw in life.”

The difference between the cemetery near the airport and the ones mentioned above is that the latter examples were at least somewhat cared for. And there

were a number of headstones or other markers designating

was buried where. Before the bodies were disturbed, families were notified and gave consent to move their ancestors and the stones went with the bodies.

The Hill, though, has been overgrown for decades and despite being in a county rich with history – and plenty who love its history – there has not ever been a stone or a marker found designating who is buried where.

Many of the unclaimed bodies, McEneny said, disturbed by the steady crawl of development, ended up on The Hill and nobody cared enough to bring along the stone or marker or place one at their new home.

In many respects, The Hill was the perfect spot for a paupers’ field. It was out of the mainstream but close to the Ann Lee home which was home to many seniors, a county “poorhouse” and close to the jail, where many were disowned.

But, with commercial development booming off Albany Shaker and Watervliet Shaker roads and the airport bursting at the seams, it’s only a matter of time before The Hill is developed.

The land is now a prime piece of real estate worth millions.

Talks have progressed to the point of County Executive Dan McCoy including $2.65 million in revenue from the sale of the land to the Airport Authority in his 2018 budget. And there was a plan discussed to lease the facility back to the county for $1 a year for five years – with an additional five year option – to give the county time to build another facility that could include indoor lacrosse and soccer too.

Money is secondary, though, and talks have stalled until someone figures out what to do with the bodies.

“There is a suspected unmarked cemetery located behind the ice rink that will be evaluated as part of any discussion,” the Legislature’s Majority Leader Frank Commisso said in a statement.

The rink, paved parking lot and grass parking lot currently being used by the Airport Authority sit on 5.5 acres while there is another 6.3 acres, at least a portion of which is The Hill.

“The authority has maintained communication with the county and has repeatedly relayed our need for additional property on which to accommodate airport operations,” said Airport Authority spokesman Doug Meyers in a statement. “The county ice skating rink property is ideally located adjacent to the airport’s existing property line and currently serves as parking for the airport’s valet parking service.”

Right now, the facility is home to the Christian Brothers Academy and Colonie/Shaker high school hockey teams and provides ice for a host of college, youth and recreational teams. It is open 10.5 months out of the year and averages 110 hours of activity per week.

If the logistics are not worked out and sale doesn’t go through in 2018, McCoy will need to come up with $2.65 million to fill the hole in his budget.

Money, though, is secondary to the spectacle created if the bodies are dug up and moved to other locations.

Hughes, the archives clerk, said she would prefer they remain at rest and whatever plans there are for The Hill should include a memorial or something to recognize the remains of Albany County citizens.

“They are our ancestors and they were by and large forgotten in life and again in death,” McEneny said. “It is one of the saddest places in Albany County.”

An aerial view of the graveyard. You can just make out the mausoleum mentioned above just to the left of the hockey rink and just outside the treeline. (Google Earth)

The Albany County Hockey Facility with the Albany International Airport in the background. (Jim Franco/Spotlight News)

A book of the dead at the Albany County Hall of Records. (Jim Franco/Spotlight News)

The old mausoleum near the intersection of Albany Shaker and Airport Access roads behind the Albany County Hockey Facility. (Jim Franco/Spotlight News)

A YEAR in REVIEW: Bethlehem residents felt the growing pains of development, road construction and a tumultuous political season

Madison Theater will potentially change hands, and its current owner wants you to be excited