Keyboard cops: The Computer Crimes Unit is one of the busiest at the Colonie Police Department 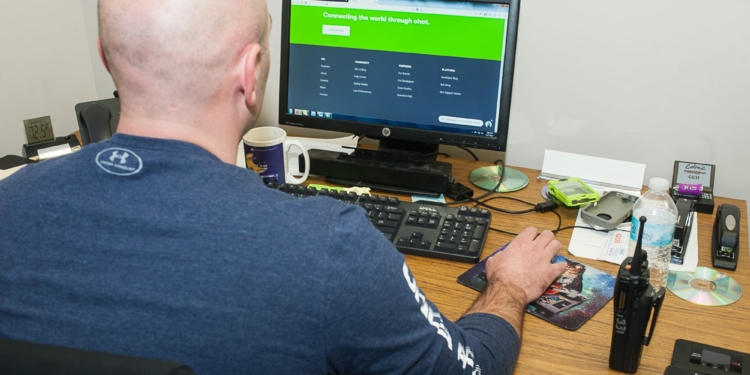 COLONIE — A couple decades ago, parents warned their children of “Stranger Danger,” and the guy in the trench coat or white van handing out candy or offering a puppy to pet.

Today, with all ages carrying around the computing power of a cell phone, those same predators are making those advances on social media sites and it happens anywhere at any time.

“Now, you could be sitting at your kitchen table and you think the kids are doing homework upstairs but these kids are connected all the time, and it’s a different message we need to get out to parents and children,” said Colonie police Lt. Robert Winn.

The proliferation of social media, and the ease anyone can connect to anyone else around the globe, is one reason the Colonie Police Department has enhanced its Computer Crimes Unit. The other is the fundamental fact that cops chase bad guys, and some bad guys are using the internet to do bad things.

“I think it is the most important thing we do,” said Sgt. George Thomaides, a detective in charge of computer crimes that recently moved from an old, tiny dark room to new, larger digs in the Police Department. “We are always going to have robberies and burglaries and violent crime and people doing bad things to each other but the ability to go out and protect our kids is first and foremost. That may sound corny and naïve, but I believe it as a parent and as a police officer.”

There are two detectives assigned to Thomaides and the CCU full time and another who works it on an part time basis. While they were reluctant to “pull back the curtain” and talk about the nuts and bolts of what they do in fear of

giving a potential criminal even a little bit of an edge, they do say the goal is to be proactive rather than reactive.

In fact, the headlines and news stories they most like seeing are the ones where the guy travels to some parking lot to meet a 14-year-old but was greeted instead by undercover officers. One better, Thomaides said, is to close a thorough investigation without cause to make an arrest.

“We are pleasantly surprised to find those,” he said.

The unit started in the 1990s as the internet was getting more main stream and chat rooms were becoming popular. Then, it slowly moved away from doing the undercover work into the forensic end of computer crimes. Dissecting hard drives and other inner workings, though, is time consuming and a specialized skill so as of the last few years the unit has moved back into undercover work.

Asked what a typical day is for the two detectives and they say the fact no two days are the same is what they like about it.

For example, that day started at 4 a.m. when they executed a search warrant with the FBI in Albany, they then caught up on some paper work, then chatted online with someone who may or may not be a child predator, then they met with a local school about a presentation and then met with a reporter to talk about what they do and later in the day were going to do some more online chatting and then talk about another search warrant with deputies from the Sheriff’s Department.

“There are no two days the same,” Dave said.

They always have the chats going, they said, and a big part of the job is keeping meticulous notes on everything they do as if everything they do is headed to a trial. But, with internet chats the way they are, the bad guys do tend to incriminate themselves.

“Before, these types of crimes were happening so far outside of our purview, and it was so hidden behind doors that were so closed and it was a such a close knit community that we didn’t have access to it so it was difficult to find and more difficult to prosecute,” Winn said. “But, the internet, as much as it has made it easier for people to traffic and trade in child pornography and to meet underage children, it has made it easier for law enforcement to find them — we are essentially using the same things to track them.”

Since the ultimate objective is to prevent anyone with suspicious objectives to meet any child, much of what they do is proactive and one way to be proactive is

to teach children what to watch out for when they are online. The detectives’ expertise is in such demand, they give more than 25 presentations on internet safety at schools across the Capital District in any given year.

If one case put the Colonie Computer Crimes Unit on the map it was the arrest of Delmar native Scott Ritter. He is the former U.N. weapons inspector who made international news by saying there were no weapons of mass destruction in Iraq. He made news again in 2001 when, thanks to work by Colonie police, he was twice arrested for soliciting minors for sex on the internet.

The unit gets tips on internet predators through concerned parents, anonymous phone calls, undercover stings or they generate their own leads.

Given that some of the cases are generated in house, there is concern about entrapment and what constitutes crossing the line from the fantasy to an overt, illegal act. When the detectives are chatting with a potential predator, Thomaides said, they are given several “outs” and both the age of the “victim” is crystal clear as is the perpetrator’s intent.

The headlines are enough to creep out any normal person, and what leads up to any arrest of this nature can get downright disgusting, Thomaides said. As such, there are mechanisms in place to make sure the work doesn’t impact the detectives in a negative manner.

“They look with at things that nobody can look at without being effected and they engage in conversations that would shock the conscious,” he said.

That said, after three years of heading up the unit, he can’t pick out one case that sticks out in his mind as being bigger than any other.

“It’s like saying one kid is more important than the other,” he said. “Anytime we get the bad guy is a success. Anytime a case goes through to an arrest and there is a successful prosecution and my guys get back and they are safe and sane, we win.”