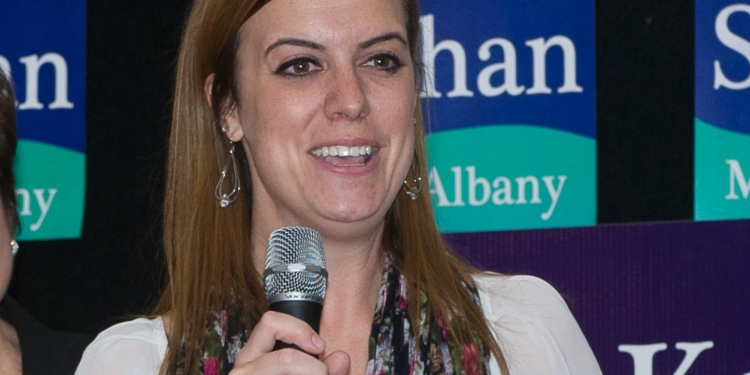 COLONIE — About the last thing you would think a 30-year-old, recently married woman looking to start a family would be doing is making a run for a local political office.

But, Melissa Jeffers Von Dollen not only ran, she got the most votes of any of the six candidates running for a two-year term on what is probably one of the most difficult positions in all of politics – a Town Board.

Her father, Patrick Jeffers, worked as an assistant district attorney under Sol Greenberg and has held a number of legal positions in county government since. Von Dollen credited him for getting her interested in politics and government at an early age, but two things since then helped make up her mind and jump into the fray.

The first came when she was a student at Elmira College studying abroad in Strasbourg, France, and she was assigned an internship with Kathy Sinnott, an member of the European Parliament from Ireland. And the second, she said, was after the last presidential election when Hillary Clinton, during her concession speech, encouraged younger females to “step off the sidelines and get involved.”

“That really hit home with me,” she said of Clinton’s speech. “I thought to myself, ‘why not me.’ And I seriously started thinking about running.”

And that’s exactly what she did.

“We started mapping out a plan in January and by February it was full steam ahead,” she said. “We started walking and hitting doors during the evening and weekends and I bet we hit 98 percent of the town at least once. We had to have reached at least 15,000 to 16,000 households.”

She joins only a handful of people 30 and under who have run and won a town-wide seat and they include the likes of Fred Fields, Nicole Criscione and Paul Burghdorf. And, she is the first of the infamous millennial generation to serve on the Colonie Town Board.

“She is going to be a transformative elected official, there are no two ways about it,” said Pete Gannon, a longtime Colonie political advisor. “She is the first millennial elected in the town and I think she will have great ideas on how that generation wants to see government work for them.”

One thing Gannon said that comes naturally to the younger is the use of technology, and he is curious to see how Von Dollen uses social media and other tech based communications tools to engage an too often disinterested citizenry.

“Communications is changing and Melissa represents the first elected official we have seen who will utilize what is happening in communication technology and use it to make government a better product for the people who elected her,” he said.

While it may be a brave new world as far as the dissemination of information, so much of how politics works, especially in Albany County, is still in the dark ages.

“Some people think she is running because of me, but she made this decision on her own.  She worked for Karen Crummey, and she enjoyed going out and meeting the people and she got interested in politics so she wanted to take a shot,” she her father. “Honestly, she wasn’t sure if she would got nominated, but once she was I’ve never seen anyone work harder. I couldn’t be more proud.”

Politics at all levels can be just a nasty undertaking, and this year in Colonie was no exception. Since there is a healthy and vibrant two-party system in town – with a town large enough to carry a level of prestige for electeds – civility is not in the near future.

“She can handle it,” said the dad of his little girl without a hint of hesitation. “She is not as fragile as she seems. One thing I admire about her is her ability to compromise. To come to solutions that don’t make everyone extremely happy and don’t leave everyone disappointed. The ability to compromise is lacking in politics today.”

Her husband, Bill Von Dollen, has his plate full too as he is working in the Albany Medical Center Hospital Emergency Room and was walking the neighborhoods with her until his pre-med classes started back up at Russell Sage.

“I think it’s great. I’m incredibly proud of her,” he said of her election. “She has the right attitude and resolve for it. I think she is going to do great things. She went in with the right intentions and motivations for the position and that is half the battle.”

It’s not unusual to get fathers and spouses to give a candidate resounding endorsements, but Von Dollen got the stamp of approval from Ireland.

“I remember you fondly as a lovely lady, hard worker, quick learner and a great team player,” said Sinnott, the former member of the European Parliament, on Facebook.

In her campaign questionnaire for this newspaper Von Dollen said the politician she admires most is Pres. John Fitzgerald Kennedy and, of course, his famous quote about “what you can do for your country.”

But, as for changing the world, Von Dollen, who works full time as a paralegal in Albany County, said for right now, she is still in the learning stages.

“I’m the only new person on the board and there is so much to learn and I am open to that. It’s great to learn something new and see a different perspective on things,” she said. “I hope, in the least, I can inspire others to get involved and  maybe even run for office.”