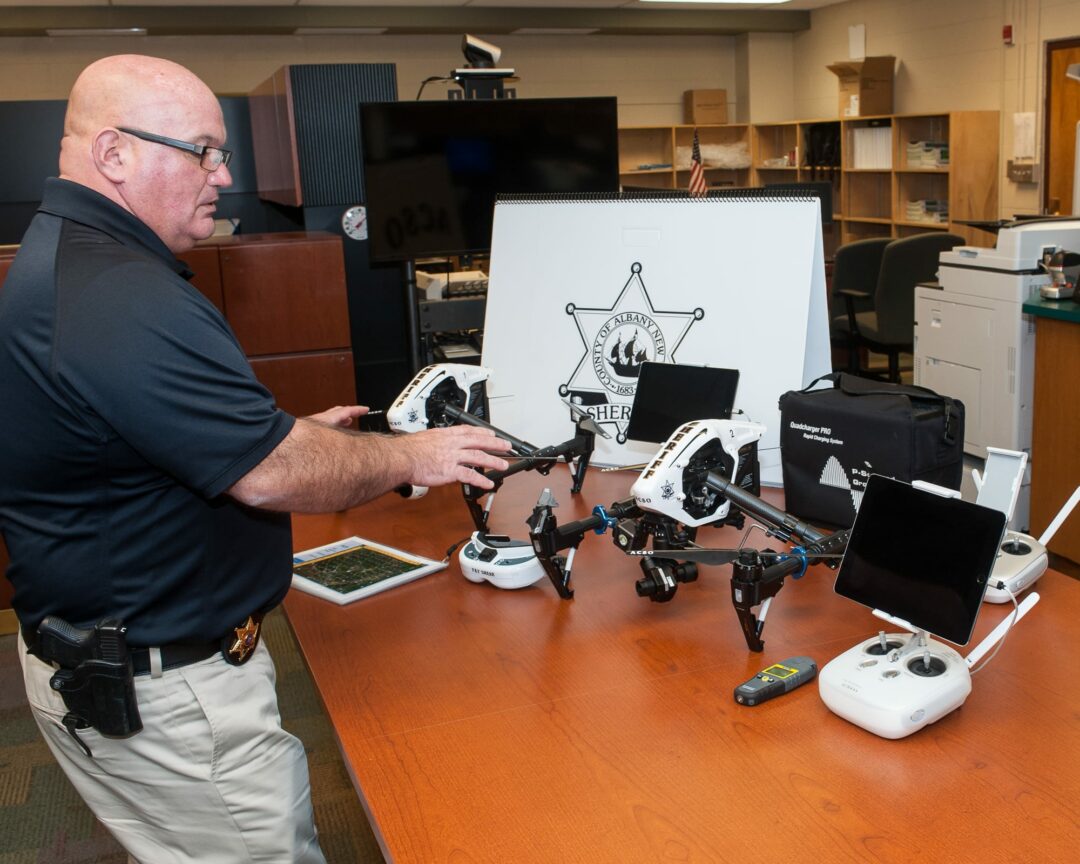 COLONIE — The use of drones by law enforcement is a relatively new phenomenon and they are currently being used to perform a plethora of tasks related to search and rescue missions, accident reconstruction, aerial mapping and fire scene analysis.

Since it was the first time a drone was used for such an application, State Police used the old fashioned tripods and survey equipment to check the numbers taken from the air. The measurements were the same, and rather than take up to three hours to reconstruct the scene, the drone did it in 33 minutes and, conceivably, the road could be re-opened in a fraction of the time.

But, drone use by law enforcement is so new that just a handful of states have formally regulated the use of drones by police — New York is not one of them — and address the accompanying privacy concerns.

The Town of Colonie is currently accepting bids to purchase two drones for the Police Department, and Lt. Todd Weiss said while the program is still in its infancy, it is looking to follow the protocol established by the Albany County Sheriff’s Department.

“We plan to use them essentially for search and rescue and to document crime scenes and accidents and fire scenes,” he said. “And, down the road, if the situation arises, it would obviously be better to use a drone than to send an officer into harm’s way.”

There are at least five bills pending in the state Legislature that would address drone use by law enforcement and most are directed towards Constitutional privacy concerns and requiring a warrant to use any evidence gathered by a drone in court. Flying a drone outside a window isn’t as easy as it appears on television, but they are easily equipped with an infrared camera that can monitor activity behind walls or in the dead of night.

“The plan is to maximize efficiency and to increase safety for both the residents and our officers,” said Town Board member Jennifer Whalen, who sponsored the legislation to purchase the drones, adding the funding will come from drug forfeiture money. “Say a little kid gets lost, or a resident with Alzheimer’s gets lost, with a drone we can cover so much more ground.”

The Sheriff’s Department purchased two DJI Inspire drones – along with an interchangeable standard zoom camera and an infrared camera — in January and have flown 13 missions.

The first, in February, assisted Troy officials in their search for a person missing in the Poestenkill Gorge who was eventually found in the Hudson River. They have also been called on to assist various fire departments locate hotspots with the infrared camera and to assess how equipment is set up to fight fires – once a fire truck is set up, moving it is a difficult and time-coming endeavor.

The potential uses of drones by his department are limitless, said Sheriff Craig Apple, and as of now doesn’t include any traditional law enforcement activities like surveillance and/or chasing down bad guys.

“We have been experimenting with it for over a year and it is turning out to be an absolutely marvelous law enforcement tool,” Apple said. “The program we developed is really the foundation used by other agencies across the state.”

In charge of the program is Commander Lee Bormann, who shepherded pilots through the basic Part 107 tests for commercial pilots and developed and obtained the Certificate of Authorization that other agencies, like Colonie, are mirroring.

The COA covers all the different scenarios and applications of potential drone use and they were first scrutinized and then ultimately approved by the FAA. Now, pilots can fly over the head of people, for example, and can fly at night and can pilot a drone out of a pilot’s direct line of sight. All conditions commercial pilots and hobbyists are prohibited from flying under.

The Albany County Sheriff’s Department is one of the first law enforcement agencies in the nation to get a COA.

The department’s seven-pound drones are flown with the assistance of iPads, which utilize software to complete detailed maps, fine tune camera settings and record flight data. They can travel up to 48 mph, can navigate in winds of up to about 30 mph and can carry about four pounds. With the two setups, the department has about $20,000 invested with the majority of that going for imaging equipment and software.

Bormann said the applications of a drone are endless. For example, if a drone locates a missing hiker or someone lost in the woods, it could then drop water or a cell phone until ground troops reach the person. If someone falls through the ice, it could drop the end of a rope to the person rather than risk an officer’s well-being. If someone is stuck on a cliff like at Thacher Park, the drone could bring a cell phone to the person to communicate with the people and help determine a course of action.

They can be used to investigate and assess hazardous materials spills or accidents, to assist in mass gathering security and a host of other applications.

“I think the more we use it, the more we’ll find situations where it can be a valuable tool,” he said.

For example, the drone was requested at a recent, large, multi-building fire on First Street. The fire chief wanted to see what the situation looked like in the back of the buildings in real time, and then, once the fire was extinguished, a drone with an infrared camera was used to find hotspots rather than waiting for them to re-kindle.

Nationwide, he said, drones are being used extensively to assess Hurricane damage in Texas and will likely be used in Florida for the same purpose.

As of now, the Sheriff’s Department has not used the drones for typical law enforcement uses. Part of that is because technology is just becoming advanced enough to make it practical. Plus, there are so many regulations already in place regarding the flight of drones and their use that haven’t even touched the privacy issues.

“When we started this we said we were going to do it right. We are going to set the example and follow the rules and the laws and we are going to be the example for everyone else to follow,” Boremann said. “They are really a remarkable, versatile tool that we can use for a number of things provided we do it safely and within FAA guidelines.”