Colonie couple traded NYC chef careers to start a farm on Forts Ferry Road, and have no regrets 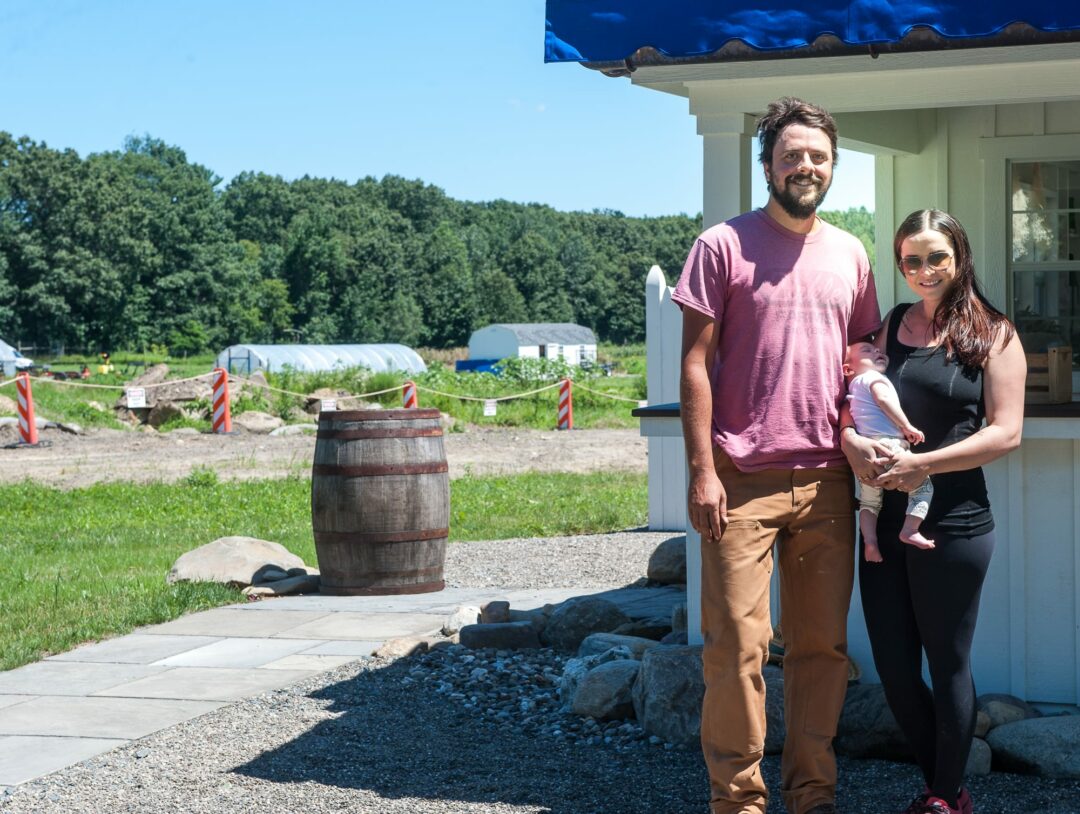 COLONIE — As more and more farmland is being sold to developers, the crops that once fed a majority of the Capital District are being replaced by homes, cul-de-sacs and manicured lawns.

One young couple, though, is bucking the trend, and the two former New York City chefs are taking what is a prime location for yet another neighborhood of cookie cutter homes and are instead planting “unique and fun” Heirloom vegetables.

It’s the third year John Barker and Emma Hearst have worked the same 20 acres of land tucked into the residential neighborhood off Forts Ferry Road, and a new barn and a building to wash and package the onions, squash, cabbage, cucumbers, melons, tomatoes and the other produce slated for completion this fall.

The quaint retail stand, which welcomes the visitor to Forts Ferry Road, sits about 40 yards in front of the field so anyone wandering in can see where the produce they are about to buy comes from. And the two are more than happy to explain the benefits of using Heirloom seeds, and anything else about farming to anyone who cares to listen.

“One particular grower, maybe for a lifetime, cross pollinated and developed these seeds into whatever characteristics they wanted to achieve whether it be shape, or taste or pest resistance,” said Barker, while holding his 7-week old son, George. “A lot of farmers’ markets around here are all growing the same things, which is fine, but we wanted to do something different and these vegetables are unique looking and unique tasting.”

The vegetables have been manipulated over years rather than a quick fix modification to make a tomato stay red and round while being transported from the large commercial farms to supermarkets, for example.

The two do know something about good food. They met at the Culinary Institute of America in Hyde Park and then moved to New York City to work as chefs in the Manhattan hustle and bustle. They then moved to Hawaii for a stint where Barker worked as a chef and Hearst as a yoga instructor. But, despite the tropic paradise, they got sick of “driving in a circle” and opted to come back to Hearst’s home area, the Capital District, to raise a family.

Hearst’s family owns the land – her father George is publisher and CEO of the Times Union – and she said the last owner had one developer interested in buying up the land that was haphazardly used to grow crops previously and subdividing it for residential homes.

“This whole area used to be farmland and we think it is important to preserve some of what’s left of it,” she said. “When we were applying for a permit to put a barn up the town was a little taken aback and told us people are usually applying for development permits.”

Barker brings his experience of working his family’s commercial farm in Ohio where they grow soybeans and corn on some 900 acres and have 60-head of beef cattle.

“My mom and everyone in my family had vegetable gardens, so we are taking that and my knowledge of a large commercial farming and doing something in between,” he said.

This year, they planted a number of different crops on about an acre and a half of land with the goal of expanding to five acres next season. While not opposed to selling their produce at farmers markets, the plan is to sell to restaurants – both locally and to the chef friends they have in New York City. And, of course, to have people visit their place to learn a bit about farming while they buy sides for the evening meal.

“They are local and they have a great variety of a lot of interesting vegetables and fruit you don’t see too often around here,” said Nick Ruscitto, the executive chef at Clark House Hospitality, the umbrella company of Peck’s Arcade and Lucas Confectionary in Troy. “They will also grow to our specifications. It is great working with chefs that are now farmers.”

Two other former chefs, Rachael and Matthew D’Ambrosio, also moved to the area from New York City to follow their dream and work the land at the farm.

“It’s just been wonderful. It’s such fulfilling work,” Rachael D’Ambrosio said. “When we had our baby we were going to move to Florida to be near my family but Emma said ‘why don’t you come work on the farm,’ and it’s been a dream of ours to work the earth so that’s what we are doing.”

Eventually the couple also hopes to branch into agritourism and hold classes on farming and in particular Heirloom vegetables, and hold yoga and other wellness courses at the farm.

“We are making a substantial investment in this community, and we love the people around here,” Barker said. “We feel if we put out a good product, and we are honest with folks and we try to educate people about what we are doing, then we can make it work. We plan on being here a long, long time.”