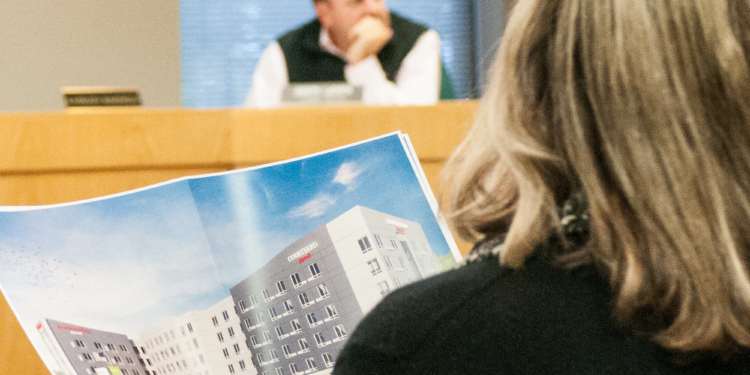 One resident looks over a proposed plan at a recent Colonie Planning Board meeting. Despite grumbling over development and traffic congestion, nearly everyone polled by Siena College this year loves living here. (Photo by Jim Franco / Spotlight News)

COLONIE — An astounding 95 percent of the people think the town is a good or excellent place to live in, according to a poll by the Siena Research Institute, the raw data of which was released to the Comprehensive Plan Committee on Wednesday, June 21.

Five percent gave the town a fair rating and none of the 607 respondents rated it as “poor.”

Another area of concern is traffic congestion, with 86 percent thinking that it impacts their quality of life.

“Colonie is a great place to live and raise your family,” said Supervisor Paula Mahan. “When we look at what the average person thinks, and some of the things that are important to them, they are OK with the commercial development and where the town has grown but they want to keep an eye on it, so we keep that balance and we strive to maintain that balance.”

“The rights of commercial developers – and landowners who have for years sold tracts of land for residential housing as means for retirement – and the needs and desires of residents is a difficult balance to strike,” Mahan said.

“Colonie is perfect as is,” said one female older than 65 in an open response while participating in the poll. “I hope the goal would be to maintain it rather than expand it. It has an ideal mix of residential and commercial already.”

Along the same lines, one question asked respondents to say if one of eight statements was descriptive and 48 percent rated “commercial development is adversely affecting the neighborhood where I live” as most descriptive.

In a seemingly contradictory finding, 65 percent think the town should focus on providing incentives that attract businesses to town but Mahan said there is currently just one PILOT, or payment in lieu of taxes, agreement.

“Colonie is a desirable place for people to develop,” she said. “You find PILOT’s in places where people have to work to attract businesses.”

Development, commercial and residential, is one reason taxes are so low in Colonie.

Eighty-six percent said the statement “property taxes we pay in the Town of Colonie are about right considering the services we receive” as completely descriptive or somewhat descriptive with 9 percent saying it is not very or not at all descriptive.

Traffic is bad during rush hour in the morning and in the evening when people are passing through on their way to or from the major cities like Schenectady, Troy and Albany or Saratoga County.

“Traffic congestion should be the town’s top priority,” said a female older than 65 in response to the poll. “Roads are congested all times of the day. Entrance to the Crossings is the worst.”

But the most congested roads – I 87 and 90, Central Avenue, Albany Shaker Road and Route 7 – are not town owned thoroughfares.

“Traffic congestion is something people look at as something they would like to see changed,” Mahan said. “But, we can’t change our location. We are in the middle of four major areas. We are a pass through town and people pass through here to go to work and come home from work. Other times of the day we can get around fine.”

She said the town continues to work the county and the state and has in the past had some success but in all, “unless we can pick up the town and move it,” there isn’t much the town can realistically do.

The comprehensive plan was updated in 2005 and is currently doing through another incarnation.

The poll asked what residents would like to see incorporated in the plan and 85 percent said new sidewalks along main roads, 81 percent said to design local roads for slower speeds and 80 percent said to invest in town parks.

As for future planning, between 80 and 85 percent of the people said the town should focus on incentives for the reuse of old buildings, protect the environment, preserve historic sites and conserve open space. Mahan said there is currently 1,155 acres of open space in the town.

An overwhelming 92 percent say they would require developers to contribute money to offset the cost of amenities, a practice Mahan said already occurs with approvals contingent on adding infrastructure such as sidewalks.

“I understand the concerns people have and right now we have the opportunity, with the update of the comprehensive plan coinciding with the Airport GEIS and the Albany Shaker Road Corridor study, to address them,” Mahan said.