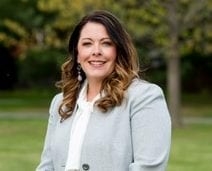 COLONIE – In what is expected to be a race to watch this year, Julie Gansle, the town’s clerk of the court, is looking to run for town clerk.

“I’m excited about this opportunity. Colonie is a wonderful place to work and raise children,” she said. “The transition from court clerk to town clerk is a natural progression that would allow me to continue to serve the residents of the town in a new and exciting way.”

The Republican Party endorsed Gansle on Monday night and it is looking like she will square off against Albany County Legislator Alison McLean Lane, who is seeking the Democratic Party’s nomination for the spot.

In March, Clerk Elizabeth DelTorto, a Republican, announced she would not seek re-election after 20 years in the spot.

Gansle began her career in at the Colonie courts as an intern and was hired part time after graduating college. She was appointed clerk of the court in 2000 by the Town Board at the recommendation of the town judges.

She supervises a staff of eight and a budget or more than $2 million to make sure one of the busiest courts in the state runs as smooth as possible. She is a past president of the Magistrate Court Clerk’s Association, and in 2014 she was named Court Clerk of the Year.

“We do everything that’s needed to help the judges make sure the courts run smoothly,” she said.

In addition, she said, much of the job includes maintaining accurate and timely records for not just the people who come through court, but for governmental agencies like the state Department of Criminal Justice Services. The duties of town clerk, she said, are similar but on a larger scale.

“I’ve worked with a number of different judges and department heads and I’ve done so effectively and with professionalism and I would continue to bring that same product to the town clerk’s job,” she said.

She will not have to give up her current spot to run for clerk of a town that has some 84,000 people and covers 57 square miles, but she will have to resign if she wins in November.

Gansle is a lifelong Colonie resident, she and her husband live in town with their three children.