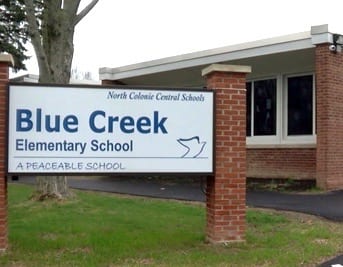 The findings by DRNY, the federal Protection and Advocacy System for the disabled in New York, include:

-Three students with disabilities were restrained multiple times by untrained Blue Creek staffers without having proper procedures in place.

-Staff used restraint as a technique to calm a situation that didn’t present a direct threat.

-The district intentionally mischaracterized the “restraint” of a student as an “escort.”

-Used an unsafe bathroom as a “quiet space” for unruly students.

-And obstructed the investigation by denying investigators access to records.

Superintendent Joseph Corr said the district reviewed the report and has implemented some of the DRNY recommendations.

“The report confirms that North Colonie has taken multiple steps to resolve concerns first identified during the 2013-14 school year, and that our current policies and practices meet state and federal law and regulations,” reads the statement issued Friday.

Read the entire report below.

One student, a fifth grader with emotional issues in the district’s Academic Skills Class, was restrained at least 13 times during the 2013-14 school year, according to report, without the required Functional Behavioral Assessment and/or Behavioral Intervention Plan in place.

“Nearly all of these restraints resulted in injury to staff and about one-third caused injury to the student, including rug burns,” according to the report.

There was no updated FBA or BIP according to the report. Instead, staff relied on a 2012 BIP when the student was restrained 15 times, a dozen resulting in injuries to staff.

The second student was a first grader with unspecified health issues who attended Boght Hills and Blue Creek schools during the 2013-14 school year and summer school in 2014.

That student was restrained at least 11 times without an updated FBA or BIP. Five of those resulted in injury to staff, two involved an assault on other students and one resulted in the student being injured.

In November, 2014 the student’s parents were told there was no BIP in place but the district was working on one, according to the report.

The third student was a fourth grader with “multiple disabilities” who was restrained at least three times from September to October, 2013.

“At that time, the student’s BIP was four years old. As a result of parent advocacy and direct staff input, the district agreed to update the BIP in October, 2013,” according to the report. “However, no FBA was conducted nor was the 2009 FBA updated.”

Basically, the purpose of an FBA is to determine factors that cause behavior in order to determine ways to deal with the behavior, or a BIP. If used correctly and concurrently, according to the report, the FBA and the BIP “reduce the occurrence of target behavior and eliminate the need for highly restrictive emergency interventions such as restraints.”

The report also found the district routinely mischaracterized “restraint,” and instead categorized it as an “escort.” Parents were notified if their child was restrained, but not if the child was escorted, according to the report.

“Specifically, of the 30 ‘physical escort’ forms reviewed by DRNY, all involved the use of physical force and 83 percent involved two or more staff completing the ‘escort’ of these elementary-age students,” according to the report. “In nearly two-thirds of these interventions, students resisted these restraints by biting, kicking, hitting and/or punching staff and in some cases causing serious injury to staff.”

The district no longer differentiates between a “restraint” and an “escort” and all physical contact between a staffer and a parent is now called “emergency intervention.”

However, DRNY said the district’s new policy, as of March 28, 2016, does not specify conduct that will lead to an emergency intervention. It only states “restraint may be used in an emergency where no other approach would be effective in controlling the student’s behavior …

“… There is no reference to imminent danger or safety. The district’s broad definition still leaves students at risk of unnecessary physical restraint,” according to the report.

The report also criticized the use of a bathroom – complete with working toilet and shower – as a “time out” room for unruly students.

The report states some staffers refused to send students there because it was too dangerous, with sharp edges on the countertop and a standing electric fan next to the shower. And, there were no windows to keep an eye on students and the door locked from the inside.

The bathroom did, however, have a bear-shaped pillow on the floor.

Another issue in the report was the problem of students “eloping” or running away from Blue Creek Elementary School, at least once into heavy traffic.

The investigation and response

According to the report, DRNY received a number of complaints by parents, guardians and current and former staffers and teachers of abuse and neglect of Blue Creek students with disabilities from April 22 through June 9, 2014.

Investigators were initially denied entrance to the school, but they got a temporary restraining order granting them access on June 23, 2014.

Investigators were then denied access to the records of four students who were in grades four through six in 2014. DRNY sued, and on March 21, 2016, a federal court granted them access.

“Since the time DRNY initiated this investigation in 2014, the district has taken substantial steps to remedy the most egregious issues,” according to the report. “While the district’s current policies and practices appear to meet the minimum requirements of state and federal law they are far from proactive.”

DRNY makes a number of recommendations, particularly in the use of FBAs and BIPs and parental notification of any and all physical contact between a student and staffer.

“This report provides suggestions for ways North Colonie can go above and beyond the requirements of state and federal law and we will consider these ideas as we continue to evaluate ways to improve our programs for our students with disabilities and all our students,” Corr said.

The status of the employees who allegedly abused the students is not clear at this time.