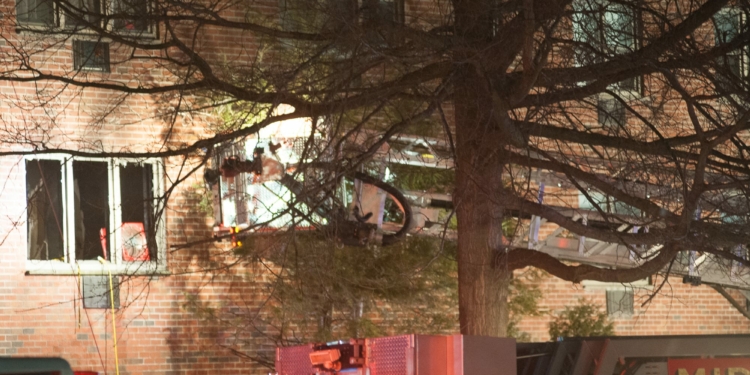 The second floor apartment where a fire at the Towne Towers apartment building originated in Colonie. (Photo by Jim Franco/Spotlight News)

COLONIE – Three people were taken to the hospital after fire broke out in a second floor kitchen of the Towne Towers apartment building around 7 p.m. on Tuesday, March 21.

Town Deputy Fire Coordinator Michael Romano said one resident was seriously injured and the injuries of the other two were not considered serious. He did not have any more information as of 10:15 p.m. A press release by town police say the three suffered from smoke inhalation and burns.

The cause of the blaze was not immediately known, Romano said. Investigators were on the scene and should have a better idea by morning.

All 130 apartments were evacuated last night, Romano said, because firefighters were forced to shut down power to the entire building, which is located directly across Central Avenue from the Fuller Road Fire Department on California Avenue.

Tri-City Rentals manages the building, and will set up a telephone number for family and friends who are concerned about loved ones

Most residents were taken to the Roessleville School, down the road at 100 California Ave., until they could find permanent shelter for the night. Residents of about 20 apartments were likely to stay at the hotel next door, Romano said, with the rest staying with friends or family.

Firefighters were working with residents to get back into the building and get clothing, cell phones and, in some cases, medications.

All the apartments above where the fire started suffered smoke damage and the ones below water damage. It’s unclear how many apartments were impacted. There is not a sprinkler system in the building.

Scores of firefighters were on the scene from all over Colonie and as far away as Saratoga County.  Fuller Road was heading up the effort.

He said one firefighter accidentally hit his emergency button, which triggered a mayday. He was not inured, but he was in zero visibility smoke and no other firefighters knew his location. He ended up following a hose line out of the building.

Fighting a fire in a high rise apartment building, is “difficult,” Romano said. Many residents living away from the fire were kept in their apartments until enough manpower arrived to escort them to safety.

Firefighters and police will likely be on the scene for most of the night. Central Avenue was closed in both directions.

BCSD residents weighed in on the future of former Clarksville Elementary