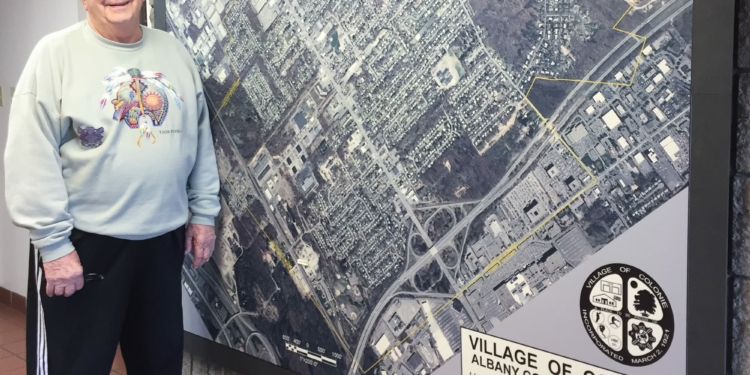 COLONIE — Village Mayor Frank Leak turns 90 today, making him one of the oldest mayors in the state and the country.

There is a 97-year-old Mayor Charles Long in Bonneville, Kentucky, pop. 81, who is said to be the oldest — and with 58 years in office the longest tenured still serving — and then there is Clarence Michalis, the mayor of Lattingtown on Long Island, who is 95 and serves about 1,700 residents. There are probably some other 90-plus mayors scattered about but nobody seems to keep such records.

First elected 22 years ago, the Navy vet and “retired” self-employed home builder may not match the mark Long is still adding to, but he shows no signs of slowing down either, so anything’s possible.

Why does he still get up and go to Village Hall everyday for a $19,900 a year job? After holding court in Dunkin’ Donuts that is.

“What else am I going to do?” he said during an interview, when he set aside the discomfort of a recent hip replacement and showed a reporter the activity going on in and around Village Hall.

And it is a hopping place. There was a cut-throat penny-ante poker game going on, a yoga class, choir practice and there was a team preparing the daily lunch – homemade eats for $5 if you’re a senior. The nurse wasn’t in, but she is on a regular basis to take care of the seniors’ health concerns.

Meghan Rogan is a lifetime village resident and she and her husband have an eight-month-old child who was born with a heart defect and spent the great majority of his short life at Boston Children’s Hospital. After four open heart surgeries and multiple cauterizations the prognosis is positive, but his parents have yet to bring him home.

Leak said people have donated everything from food to time to money and there was a 5K race held on March 12 at Cook Park to help out with travel expenses and accommodations in Boston. The very active senior community bought teddy bears and brought them to Boston for the other children at the hospital.

“Boston is doing a great job and he is getting better each day. He is getting stronger but we have a lot of obstacles to overcome yet,” Rogan said after a chance meeting at Village Hall. “Everyone in the village has been just amazing.”

On a lighter note, during a recent interview, Leak displayed a letter from one of his about 8,100 residents.

The letter, written in long hand on parchment-like material, complained about them not doing enough in Washington D.C. to combat pollution and wanted the good mayor to do something about it.

“We will respond to her. We respond to everyone,” adding with a with a chuckle, “Washington isn’t looking into this so they want me to do something … a little old village.”

But, sometimes, people just want to be heard, and answered and made to feel they matter.

“People want to talk to someone,” Leak said while fondling the envelope. “The eye-to-eye contact is better than a phone. The handwritten letter is better than an email. I’m in here every morning. I get a cup of coffee at Dunkin’ Donuts every morning at 9 a.m. and they know where I am. And people come in and say hello and tell me what is on their mind and we try take care of them.”

On a broader level, there are other benefits to the between $600 and $700 in extra taxes residents pay to live in the village, an extra layer of government in the middle of one of the largest towns in the state.

Trash pick up is free and town officials load up fire engines on Easter and Christmas and parade around the neighborhoods tossing candy to kids.

“Services is a big part of it and the communication between the community and the governing body,” said Jamie Blott, the clerk/assessor. “It’s a more intimate relationship between residents and appointed and elected officials. It’s like a big family and I think that’s why people like the village.”

In 1921, the village borrowed $500 to incorporate and four days later created the the department of Police Justice and set the tax rate at $3 per $1,000 of assessed value to help pay expenses in the first village budget worth $1,285.

Now there are some 3,200 properties and the stretch of Central Avenue from the east side of Route 155 to the west side of Wolf Road is lined with businesses. The yet to be approved 2018 budget is now a relatively whopping $7.5 million but doesn’t include a tax increase. It does, though, provide for such things as snow removal, fire protection services, senior and youth outreach programs, parks and recreation, sewer and water services and a sprawling complex behind the fire house to support it all.

With its success, though, comes traffic and Leak said if there is one constant complaint from residents it’s the traffic on and around Central Avenue. That and the smell from the City of Albany landfill on Rapp Road.

In all, looking at the mechanisms behind the scenes of how the village operates it’s like walking back in time to the 1950s.

“We try to stay that way,” Leak said. “We like things the old fashioned way.”

Love for Nash: Benefit to help out local drummer