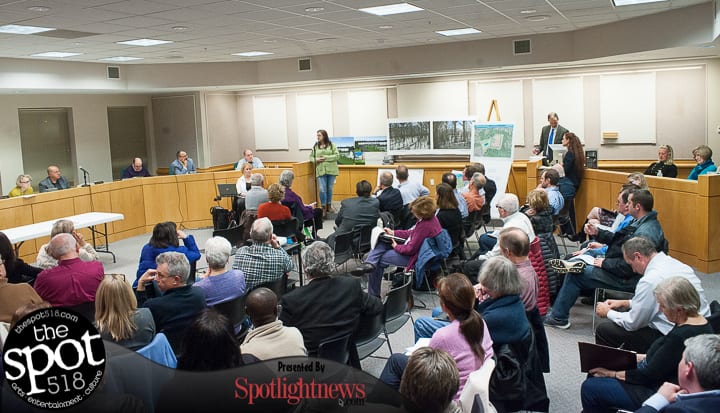 Residents at the Town of Colonie Planning Board meeting discuss the Summit at Forts Ferry Road. (Photo by Jim Franco/Spotlight News)

COLONIE – After a spirited debate, the Planning Board did not take action on a proposed 110-unit independent living senior apartment building for 13-plus acres of wooded land on Forts Ferry Road.

Some two dozen residents spoke on Tuesday, March 7, with the great majority against the size and scope of the proposed Summit at Forts Ferry that would target people 70 years old and up.

Eric Smith, the president of the West Latham Neighborhood Association, said his group is opposed to the project as proposed because of it’s size, density, drainage issues, increased traffic and the lack of need for such a facility in that area.

The board opted to not take any action, but Chairman Peter Stuto said he is reluctant to vote for the project unless it is scaled down.

Board Member Tim Lane, though, said he visited properties in Wilton and Glenville built and operated by The Nigro Group and thought something similar would be a good fit on Forts Ferry Road.

“The impact did not seem that high,” he said. “It was quiet and peaceful and and high-end.”

Residents were not sold on the presentation that began with a short video of seniors enjoying life at an independent living facility.

“We need you to help us and do what is right for the town, not Mr. Nigro and Not Mr. and Mrs. Drake,” said John Drake, who raised two children at his Catalina Drive home. “What is being proposed changes the character of the neighborhood. I request you deny the PDD.”

Representatives from Nigro are asking the Planning Board first to recommend to the Town Board a change in zoning from the existing Office Residential to a Planned Development District.

Mary Beth Slevin, part of a trio who made the presentation Tuesday, said the group will continue to try an appease the neighborhood concerns.

“The density and the number of units is important from an economic feasibility perspective and those issues don’t change,” she said after the nearly three-hour discussion. “We hope the board will look at this in the context of what can be built now and look at this as a better transition than an office/commercial development.”

A big part of the group’s pitch is that senior housing would have less of an impact on the neighborhood than what is currently allowed: three buildings equaling some 235,000-square-foot and a three-deck parking garage.

Slevin also emphasized the need for senior housing in the town, saying the existing facilities are 90 percent-plus to capacity.

A two-bedroom, two-bath apartment at The Summit would go for

between $1,600 and $2,500 a month and include breakfast, transportation services, cable TV and Internet, activities and other necessities like sewer, water and trash.

The 146,500-square-foot, three-story building would include an indoor pool, recreation facility and, said a representative fro Nigro, minimal impact on traffic and town services.

To satisfy the public benefit requirements of a PDD, developers will construct 1,200 feet of new sidewalk along Forts Ferry Road at an estimated cost of $200,000. In addition, Slevin said, there is an inherent benefit of providing the town with needed senior housing.

The conversation was amicable, for the most part, but got contentious when the issue of the buffer zone came up. In 2007, the buffer jumped from 100-foot to 213-foot but there is no record of it ever being formally approved by anyone or any board anywhere, said members of the board.

“All they did was tell you there was a bigger buffer and that was it,” he said.

Supervisor Paula Mahan said she could not find any official paperwork regarding the buffer zone when she took office in 2008 and hasn’t been able to find any since.

“I know how planning was done before, and it was upsetting, and in my opinion it wasn’t legal,” she said. “You are all here for the right reasons, to protect your neighborhood. The developer is here because he has a project he wants to build. The Planning Board is an objective body and they are tasked with the job of working with people and not do what is in their own best interest.”

It’s unclear when the project will again come before the Planning Board or if the Nigro Group will modify the proposal.