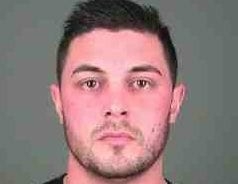 ALBANY – A 32-year old Latham man was arrested after he allegedly approached two city police officers with a loaded handgun in broad daylight.

According to Albany police spokesman Steve Smith, on Thursday, Nov. 17, at around 2 p.m. Sprague Frenyea drove up to two detectives sitting in an unmarked car on the 100 block of Franklin Street.

Frenyea pulled his car in front of the detectives’ car blocking them in. He then got out of his vehicle and began walking towards the officers with a loaded handgun in his hand.

Both officers exited the vehicle, identified themselves and ordered Frenyea to drop his weapon.

Frenyea initially lowered his weapon, and began backing away from the officers but put the gun in his pocket rather than dropping it to the ground as ordered.

The detectives continued ordering Frenyea to drop his weapon, and he eventually complied, placing the .38 caliber pistol on the ground.

He was arrested for reckless endangerment, menacing and criminal possession of a weapon. He was arraigned in Albany City Court and remanded to the Albany County jail. The status of bail, if any was offered, is not known.

20-year-old driver killed on Nov. 19 had history of driving violations