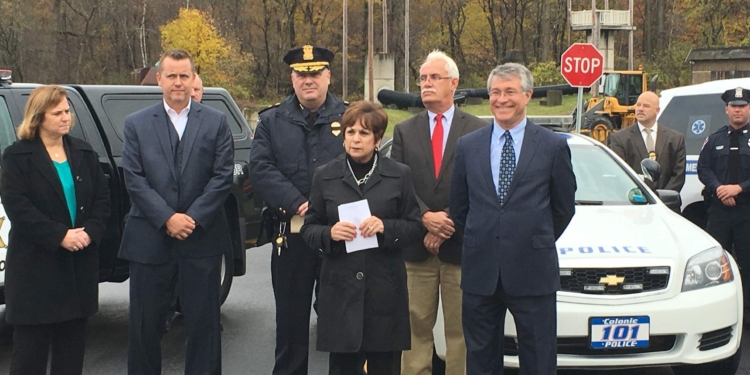 Town and state officials gathered on Thursday, Nov. 3, to unveil the new “streetscape” training facility, which incorporates the physical features encountered by emergency responders every day and includes a 480-foot section of divided highway with intersections, driveways, utility poles, and a bus stop, according to a press release. Also located on the streetscape are two houses that were donated to the town in 2010 and are used to stage a number of complex emergency response scenarios.

“There are an awful lot of people who are involved with this, and we’re very proud of it,” Colonie Town Supervisor Paula Mahan said.

State Assemblyman Phil Steck secured $300,000 in state funding for the project, with $250,000 set aside for capital improvements to the municipal training center and the remaining $50,000 to be used for upgrades to the streetscape, according to a press release. Further enhancements are expected in the future, including upgrades to lighting, electrical, and audio visual modernization.

The town’s emergency services are repeatedly touted as one of the strongest pillars in the sprawling, 83,000-person town and Steck, a Colonie resident, said fire services have continuously been at the heart of civic life in the town.

“We need to make sure that our firemen and firewomen are trained in the best possible setting,” he said. “We’re trying to reach out and do everything that we can to help town governments.”

2017 Colonie budget passes ahead of schedule