2017 Colonie budget passes ahead of schedule 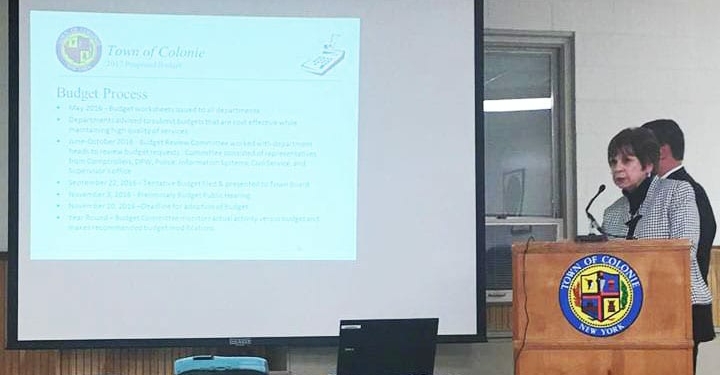 COLONIE — Nov. 20 was the deadline to adopt the 2017 budget, but since there were no audience questions or comments at a public hearing, the Town Board decided to adopt the budget at its Nov. 10 meeting. It was approved unanimously.

The proposed budget spends $88,992,272, which is a 1.9 percent increase over this year. That increase, which totals about $1.6 million, covers the increased costs of operations and mandated payments to the state retirement system for employee pensions, according to the budget. It contains a total net tax rate increase of 4.6 cents per thousand of assessed taxable value, which means the net tax increase for a home of median value is about $6.50 for the upcoming year.

In total, the proposed budget lists general townwide operating funds at $48,715,191. The total Pure Waters revenue in the 2017 budget is listed at approximately $6.4 million. The total Latham Water District revenue comes in at almost $13 million, according to the budget.

After explaining the major points of the budget, Town Supervisor Paula Mahan detailed some of the nuances in the planning process.

“I can tell you that, each year, it doesn’t get any easier. It’s extremely challenging. We offer a tremendous amount of services at a very fair cost, and we’re a very, very large operation,” she said at the board meeting. “We as a board, we struggle with this because it’s extremely difficult because we want to stay within the tax cap and we want our residents to be able to have the advantage of that. We feel it’s a pretty good budget.”

Mahan noted that one of the largest challenges each year with developing the budget is remaining under the 2 percent tax cap while also allocating enough money to maintain a high standard of town municipal services, such as emergency medical services and snow removal.

In a recent interview with Spotlight News, Mahan emphasized the conservative, tight nature of budget. She stressed the town, having rebounded a few years ago from massive debt, must spend smartly in order to maintain its widely touted low-cost, high quality standard of living.

“You have to live within your means,” Mahan said. “We’re pretty structured.”

The 2017 budget may be viewed online.