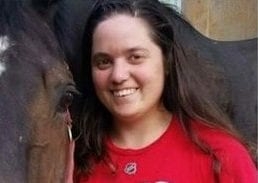 The missing Colonie woman, Tiffany L. Palladino, was found safe and sound in Hamilton County. No other information is available.

The Warren County Sherriff’s Office is investigating the disappearance of a 25-year-old Colonie woman.

According to the Sherriff’s Office, Tiffany L. Palladino has not been heard from since Tuesday, Oct. 25, at around 11:16 a.m. when she told her mother she was going to hike an unknown trail in the Stony Creek area of Warren County.

At that point, data from her cell phone indicated she was in northern Saratoga County near South Shore Road.

She is driving a grey 2009 Kia Optima with RPI hockey and a Notre Dame stickers affixed to the window.

She is likely with her dog, a tan and white Akita/Shepard mix.

Palladino is described as a white female, 5-foot, 2 inches tall and weighing about 120 pounds. She was last seen wearing jeans, a black sweatshirt and sneakers.

Anyone with information is asked to contact the Warren County Sheriff’s Office at 518-743-2500.

NIGHT & DAY: Halloween under the Big Top and Shrek The Musical