Rolling along: Wheelchair-bound 10-year-old a member of Menands’ cross-country team 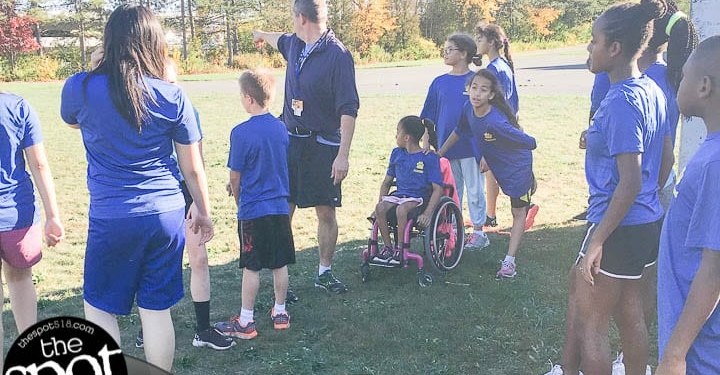 Kira Wall and her teammates hype each other up before the race.

MENANDS — Kira Wall, 10, eyes focused front, has positioned her wheelchair at the end of a line of fellow Menands School fifth graders preparing for the signal that will start their cross-country race. Once the race begins, Kira will roll her wheelchair as fast as she possibly can down and back up a concrete path to the race finish line while her teammates loop around the field behind Menands School and back through the woods.

Kira makes fast work of the first part of her course, which is down hill. She slows a little coming back up the path, pushing and fighting to get up the hill on the hot October day. But she doesn’t stop. She powers her way down the course to the finish line with a look of such fierce focus and determination on her face that one would feel foolish for even suggesting that she could be tired at all.

Kira then hugs her father, brandishing her first place ribbon, as her teammates begin to cross the finish line as well.

Kira was born a conjoined twin with her sister, and during the separation process suffered from an event akin to a spinal stroke in which the blood flow to that part of her body stopped, resulting in the loss of the use of her legs. That didn’t stop her from showing up to the cross-country informational meeting in June, without a single doubt in her mind.

Upon hearing about Kira’s interest in the sport, the school, and the Friendship League (the cross-country league made up of smaller kindergarten through eighth grade schools) accommodated her by providing a paved, half-mile course for her to race on.

“I think she went into this thing, guns blazing, that she was just going to do this,” Kira’s father, Peter Wall said.

Charlie Blanchet, third grade teacher at Menands School and the cross-country coach, said that Kira is not in the habit of letting anyone stop her from doing anything, and he knew that joining the cross-country team was something she could handle.

“I knew this was going to work because she’s a tough kid,” Blanchet said. “She’ll put her heart into it.”

True to form, Kira is a force to be reckoned with.

“I ran over a sharp stick once, and it broke the stick,” she said. Continuously, she insisted that she was not nervous for her race. She knows her course well.

However, before her event, Kira didn’t seem too thrilled about racing in the uncharacteristic October heat. In fact, she even mused about retiring from the sport early.

“It’s my fault,” she said as she practiced her course before her race. “I’d rather just sit in the shade.”

But her coach and father saw right through that, and both were certain that with Kira’s competitive attitude, independence, and athleticism, she would definitely be back for the next season.

“If you’re ever looking for a reality check about your situation, just go talk to Kira for a little while. She’ll straighten you right out,” Wall said. “When she makes her mind up to do something, it’s done.”

Kira is constantly surrounded by teammates, who clearly adore her. She cheered them on while they raced, and they cheered her on, and to them, the wheelchair doesn’t seem to even exist. She is a runner, a teammate, and their friend.

Photos by Kassie Parisi. Click on one to view the full-size version of others in the gallery.

Kira Wall practices her course before her race

Kira Wall stretches with her teammates

Kira Wall and her dad Peter celebrate after the race

Kir Wall stretches with her teammates

Kira Wall and her teammates hype each other up before the race.