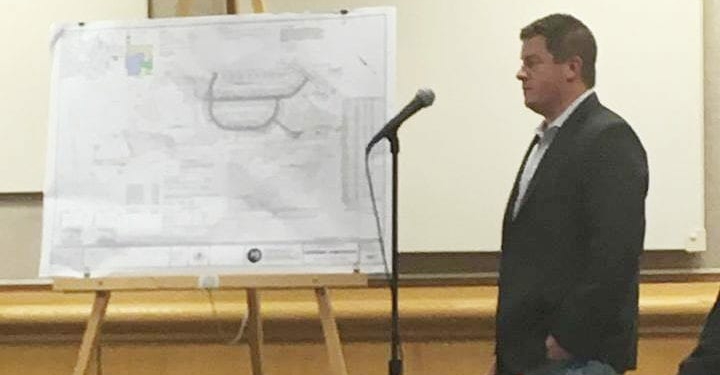 COLONIE— Two weeks ago, the town’s Planning Board dedicated over an hour to talking about a possible housing development on Lupe Way, a project which both residents and board members had many issues with.

On Tuesday,  Oct. 4, Project Engineer James Easton of MJ Engineering and Land Surveying, gave a lengthy presentation during the board meeting in an attempt to address concerns about his project raised by the board and the public at past meetings about the possible development. The board has seen this project three times before..

Previous to the meeting, the planning board recommended that the site the developer intends to build on be rezoned from industrial to single family resident. The Town Board subsequently voted to rezone the property and in May, the developers went through the rezoning process.

However, specifics on the project have been difficult to pin down due to the make up of the land itself, regardless of the rezone. The land is located in a conservation overlay district, and many sections scattered over the entire parcel are classified as “constrained,” which means the developer may not build on them.

In a standard conservation subdivision, the number of houses that can be developed on the property is the result of calculations that are made based on how much land is left after the constrained land has been accounted for. But, the broken up layout of the land has made it difficult to determine exactly how many homes will be able to fit on the land because the board cannot tie all the useable land together.

“I have major questions in that regard on this property,” Planning Board Chairman Peter Stuto said.

According to Easton, when all the constrained land is taken away, he is left with around 20 acres to develop on. He said that even though according to the town code there could be up to 69 homes built on the parcel, he was only suggesting 52. On top of that, out of the 52, seven of the homes will be smaller carriage homes. The other intended homes will be single-family homes. Easton, who met with a representative from the New York State Department of Environmental Conservation, said that the plan he was showing the board was his take on the best design and use of the property.

During his presentation, Easton tried to address many concerns that the public and board had recently expressed with the project. Residents had previously expressed uneasiness with the proximity of railroad tracks to the property, but at the meeting Easton pointed out that the tracks are 800 feet from the closest home, and that New York State railroad law does not present a minimum distance that tracks need to be from a house.

Easton also described a traffic study that was conducted near the proposed site that the public seemed to take issue with. The traffic study counted the number of cars that traveled on roads, and also the speed at which the cars were driving and what the make of the car was over a period of nine days. The study showed that on the section of Bonner Road that was analyzed, there were around 575 cars per day traveling on it at a speed at 25 miles per hour, a point which residents vocally contested. Easton said that on Nutwood Avenue, people drove at an average speed of 36 with a high speed of 46.

I’m just presenting the facts,” Easton said against the public’s outcry that the traffic survey was placed intentionally in a spot where people drove slowly.

There was also concern about the fact that Bonner Road only has a single access point that already serves 52 houses, and this single point of entry would not only need to accommodate whatever additional houses are built for the development, but also would need to deal with construction equipment moving in and out while the new homes are being built. Joe Grasso, town designated engineer on the project, noted that there would be a 76 percent increase in traffic on that section of Bonner Road due to the development.

A few mitigation measures were brought up to deal with the impending traffic issue on the single point of access area, including the creation of secondary access points, or expanding the existing single point of access from 19 feet wide to something closer to the new town standard, which is about 30 feet. The board was also struggling to decide whether the project should be completed all at once, or in smaller phases to lessen the impact on the single point of entry and the nearby homes. Regardless, the public pointed out, the construction vehicles will be in the area.

Another issue the board had to tackle was the number of homes that Easton was proposing for the site, noting that the 52 currently proposed might not be workable.

“I think I speak for the board when I say, we are conscious when applicants appear before us, that there is a break even point between how many houses you have on a site to make it doable with development. But there are also questions with regard to how big those houses are, what they look like and so forth,” board member Kathleen Dalton said. When asked whether he would consider building less houses that are bigger and theoretically have a higher value, Easton said he couldn’t guarantee that the bigger houses would have more value, calling it a “market dictating question.”

“If you sell a house for a dollar, I bet you there’s a line out the door,” Easton said. “If you sell if for a million dollars, there’s going to be less people standing at your door. I can’t dictate due to market demands.” He also said that he added the smaller carriage houses to provide home-seekers with more options, and that based on his study of the immediate surrounding areas, $600,000 homes would be an overestimation for what the Lupe Way site could handle.

Ultimately, the board did not vote on the project at the meeting. Members requested that Easton come back with a different design that contains fewer proposed houses on the lot, and additional site plans and data to see exactly what the best design for the site would be that is feasible while being less intrusive to the existing neighbors.