Police to put emphasis on bus safety, still have plans to focus on Wolf Road in the future 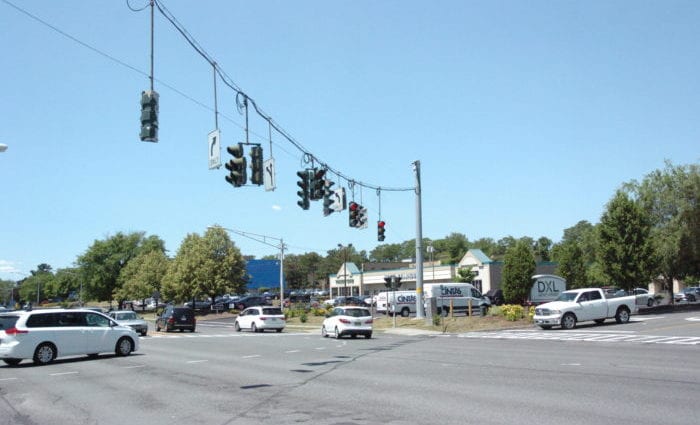 The intersection of Wolf Road and Central Avenue by Colonie Center Mall and Northway Shopping Center is considered one of the most dangerous roads in the area. Kassie Parisi / Spotlight News

COLONIE — There has been a slight decrease in the amount of traffic violations around the intersection of Wolf Road and Central Avenue since police ramped up the amount of tickets they were issuing for such offenses, according to police.

In early June, as part of an effort to increase pedestrian and driver safety, police began to hand out more tickets for traffic violations this summer.

According to Lt. Ken Pero, police began ticketing more people in an attempt to stop driving and pedestrian injuries and fatalities, specifically in the area between Colonie Center and Northway Shopping Center. Officers were stationed in various places along the road making sure drivers and civilians didn’t take shortcuts that could lead to injury or death, such as stopping their vehicle in a crosswalk or failing to push a crossing button and wait for a signal to cross a street, said Pero.

Now, three months later, Pero said that while there’s been a slight increase in dangerous activity, the push to increase safety isn’t finished.

“It does continue to be a problem and we will sporadically hit that area and other areas when we have the manpower,” Pero said.

With schools on the verge of being back in session, Pero said in the next few weeks police will be turning their attention to making sure traffic and safety rules regarding school buses are followed. He mentioned that some drivers forget about the buses due to their absence in the summer, and that he will have four different police details out to make sure people stop for them during the first few weeks of school. Pero said that parents should teach their children to pay attention to their bus drivers to watch for crossing signals, and educate them about school bus safety in general.

“I always think its worse when school first starts,” Pero said. “Hopefully we’ll nip it in the bud in the beginning.”

LETTER: Honor those who fell on 9/11 by donating blood at Town Hall Monday, September 12