Big league reality: Jeff Hoffman gets the call from the Colorado Rockies 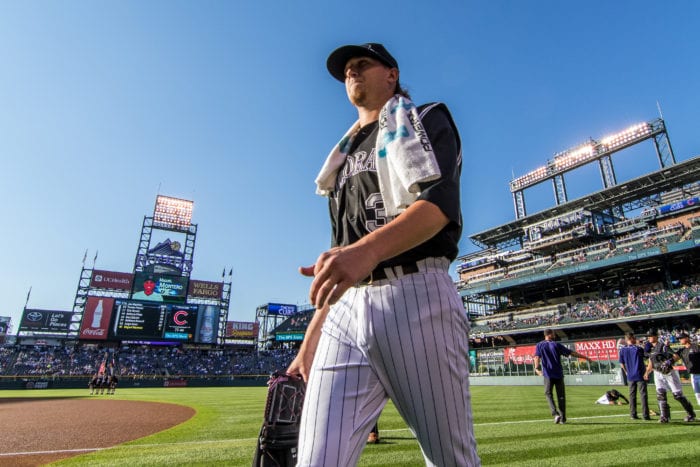 The former Section 2 baseball star cruised through the first three innings before struggling against the National League Central Division-leading Chicago Cubs. Ultimately, he took the loss after allowing seven runs – six of them earned – in four-plus innings in the Cubs’ 9-2 victory over the Rockies in Denver.

Still, Hoffman had the support from a large group of family members and friends who made the trek to Denver for his debut.

“It was really great,” said Hoffman’s father, Jeff Hoffman Sr. “There was a great atmosphere. There were 50,000 people in the stands cheering him on. It’s a surreal experience to watch your son pitch in that atmosphere, especially against the best team in the league.”

His former high school coach, Steve Frank, watched the game from his home.

“I thought he did a lot of good things,” said Frank. “I did see the command and the poise that I saw in him five or six years ago (when he pitched for Shaker).”

It’s been a wild ride for Hoffman. After impressing scouts while at Shaker, and then at both East Carolina and the Cape Cod League, Hoffman was looking at being one of the first selections in the 2014 Major League Baseball draft. Then, he needed Tommy John surgery to repair the ligament in his pitching elbow.

Hoffman’s body of work up to that point still garnered him a high draft pick, as the Toronto Blue Jays selected him ninth overall. He sat out the rest of 2014 before beginning his pro career in Toronto’s minor league system last spring. He graduated quickly from A ball to AA, which placed him on a fast track to the Major Leagues.

“The trainers at East Carolina … (they were) really on him, getting him in the weight room,” said Hoffman Sr. “And then, I felt the Toronto Blue Jays took really good care of him after he was drafted.”

Then in late July 2015, Toronto sent a group of minor leaguers, led by Hoffman, to Colorado in exchange for All-Star shortstop Troy Tulowitzki. Now, Hoffman found himself part of an organization where the commonly-held belief is that its pitchers struggle because of the fact that the Rockies play half of their games every year in the thin air of Denver.

Frank, for one, said he doesn’t think Hoffman is fazed by where he’s pitching.

“I think Jeff is not going to be concerned that his ERA is a quarter point higher than some other guy pitching for a different team. All he wants to do is win,” said Frank.

Hoffman began this season pitching for the Albuquerque Isotopes in the AAA-level Pacific Coast League. For a long while, Hoffman bucked the trend of other pitchers in the offensive-minded PCL and posted a sub-3.00 earned run average. A couple of shaky outings in July raised Hoffman’s ERA over 4.00.

Hoffman got the call-up he had been waiting for Friday, Aug. 19. The next night, he took to the pitcher’s mound to face the Cubs — one of the top teams in the National League.

At first, the Cubs had trouble getting on base against Hoffman. Dexter Fowler’s lead-off single in the first inning was negated by a double play, and Hoffman went through the rest of the lineup without allowing a hit through the third inning.

But the Cubs hitters got to Hoffman after that. They scored four runs on five hits in the top of the fourth inning, and then Kris Bryant blasted a three-run homer to end Hoffman’s night in the fifth inning.

“In the beginning, he was executing his pitches,” said Hoffman Sr. “But then, he just got behind the hitters, and you can’t get behind hitters in the big leagues.”

“I think he would tell you it’s the big leagues — everyone is going to be top notch,” added Frank.

Hoffman’s next scheduled start is Friday, Aug. 26, against the National League East-leading Washington Nationals. Nothing is guaranteed after that, though, as Colorado assesses where Hoffman is at and how he can contribute the rest of the way.

“He realizes it’s one game at a time, but he just wants the opportunity to play,” said Hoffman Sr.